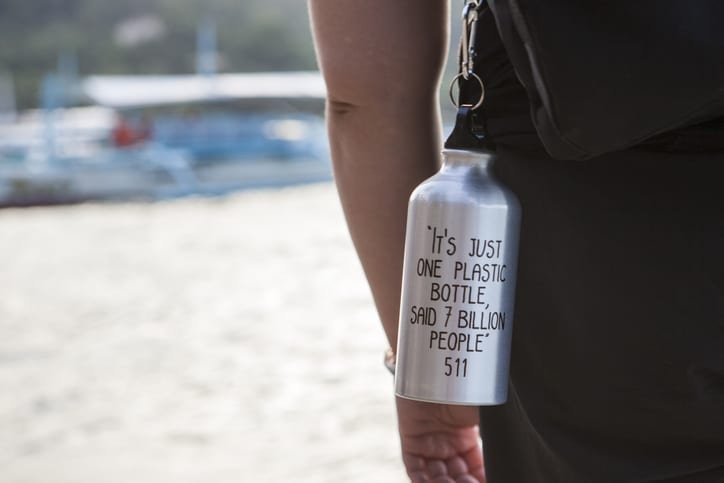 Buying single-use plastic water bottles could soon be seen to be as bad as littering, spitting in public, queue-jumping and playing loud music on public transport, according to a new survey to mark National Refill Day on 19 June 2019.

Three out of four British people in the OnePoll survey said society should move towards single-use plastic being socially unacceptable, with the research also revealing that an overwhelming majority of the public (86%) are now worried about the impact of plastic pollution in the environment.

Despite the public wanting to take action on plastic pollution, sales of bottled water continue to grow. Sales in the UK hit a record £558.4m in the year to last November, an increase of 7%, according to the latest figures from the market analyst Kantar.

According to the Environmental Audit Committee, consumption of bottled water has doubled over the last 15 years, with over 7 billion plastic water bottles used each year in the UK.

As part of the award-winning Refill campaign, people are now being urged to stop buying single-use plastic water bottles and switch to refillable ones to help fight the tide of plastic waste.

The UK public can support National Refill Day by switching from single-use to a reusable bottles and sharing their commitment on social media, by telling the world they’ve #GotTheBottle to prevent plastic pollution.

National Refill Day, on 19 June, is the centrepiece of the Refill campaign, with a nationwide day of activity all over the country. At Canary Wharf, London commuters will get the chance to refill at the interactive ‘Hydration Station’. Every time a member of the public refills at the station they will be able to digitally ‘free the fish’ on a nearby billboard, raising awareness of the impact of plastic pollution on our oceans.

In addition, some of the UK’s busiest Network Rail stations (Birmingham, London Paddington and London Bridge and Charing Cross) will have teams on the ground directing people to the new Network Rail water fountains. There will also be local activity up and down the country organised by water companies and more than 200 volunteer-led local Refill Schemes.

‘This country enjoys some of the best drinking water in the world, and we’ve made it easier than ever for people to make the pledge on National Refill Day to switch to a reusable bottle and fill up for free on the go.’

The app that maps refill points

National Refill Day was launched last year by City to Sea, as part of the Refill campaign, with the support of Water UK, the organisation representing the main water companies in the UK. The goal is to normalise refilling and make it as easy as possible for people to find free, high-quality drinking water on the go.

The vision is to create a national network of high street retailers, coffee shops, transport hubs and businesses offering to let the public top-up their water bottles for free in every major city and town in England by 2021. There are also new water fountains being put into public spaces.

You can download the free app to find out where the nearest refill point is, or look out for special signs in shop windows.

‘It’s been incredible to watch the Refill campaign flourish over the past few years. National Refill Day is something that everyone can get onboard with and has the potential to drastically reduce the amount of unnecessary single-use plastic we use when we’re out and about. People want to help prevent plastic pollution, and Refill puts the power to do that in their hands.’

The number of Refill points listed on the app in the UK has just passed 20,000, including train stations, airports and high street chains like Starbucks, Costa and Wetherspoons. As part of the activity for National Refill Day it’s been revealed that Greggs, Sweaty Betty and Parkdean Resorts have recently pledged their support and are now listed on the free Refill app.

It is estimated that the Refill campaign will have stopped over 100 million single-use bottles from becoming waste by the end of 2019.

Earlier this year water companies outlined plans to prevent the equivalent of 4 billion plastic bottles ending up as waste by 2030 as part of their Public Interest Commitment.

Click here to read our interview with SAS’s Hugo Tagholm, who says ‘plastic is the new poo’.