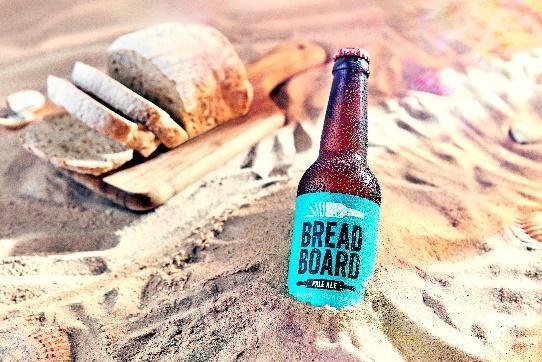 Iceland has launched Bread Board, a pale ale made using the supermarket’s surplus bread.

The beer costs just £1.80 per bottle, or three for £5.00, and is expected to make good use of three tonnes of unsold bread over the next year.

Developed exclusively by contemporary Welsh brewery Tiny Rebel, 10p from each bottle will be donated to Surfers Against Sewage (SAS) – a grassroots movement that has grown into one of the UK’s most active and successful environmental charities.

These donations will be used to fund UK beach cleans and other initiatives that champion the reduction of avoidable single-use plastics.

‘We’re really passionate about reducing waste and we’re chuffed to be helping Iceland repurpose this bread to make beer. We replace some of the malt in a brew with the bread, extracting starches and breaking them down into fermentable sugars, so the bread is more than just a flavouring. It’s a really drinkable beer that shows the value and the massive potential from using alternative ingredients.’

Iceland’s managing director, Richard Walker, said that using surplus bread this way, meant that Iceland is helping to avoid food wastage and ensuring its resources are being used to their very best potential. ‘The fact it tastes great too is an added bonus!’, he said.

The team has been developing the beer for six months, using unsold bread from local Iceland stores and Iceland’s Welsh bread supplier. The result is a refreshing pale ale that has tropical fruit and citrus aromas with a refreshing hopped bite.

‘As a surfer and environmentalist myself, I’m passionate about the need to protect our oceans and beaches from the scourge of plastics, and the creation of Bread Board gives us the perfect opportunity to combine our sustainability efforts. We couldn’t have picked a charity with an ethos more aligned to ours than Surfers Against Sewage and we’re looking forward to helping them with the important work they’re doing.’

Earlier this year, Iceland pledged to become the world’s first major retailer to eliminate plastic from its own-label packaging within the next five years.

Hugo Tagholm, chief executive of Surfers Against Sewage, said that Iceland ‘is really doing something special’ by developing a product that’s not only sustainable, but supports environmental initiatives to protect our oceans.

‘The donations we receive from Bread Board will assist our team in tackling plastic pollution on the frontline – on our tidelines and beaches nationwide – the focal point of the destruction to our marine life’, Hugo said. ‘They’ll also support initiatives which encourage consumers to reduce avoidable single-use plastics consumption.’

Beyond the development of Bread Board, Iceland has been working for the last year with SugaRich – the UK’s leader in reprocessing surplus food products – turning all of its unsold bread into animal feed.

Bread Board is available now in stores nationwide and online. Iceland is offering an exclusive 10% discount to all those working for the NHS, Police, Fire Service, Ambulance, HM Coastguard and RNLI, when they shop at one of its stores before Sunday 29 July 2018.

Those who take advantage of the discount in July and use their bonus card in the same transaction, will then unlock a further 10% discount when shopping with ID between 03 August and 02 September.