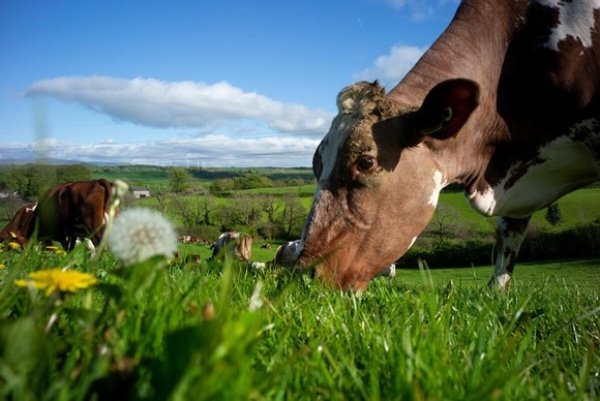 A new WWF report reveals that, at a time of global food insecurity, half the UK’s wheat harvest each year (equivalent to 11bn loaves of bread) is being used to feed livestock in an ‘inherently inefficient’ process that is fuelling climate change and driving nature’s decline in the UK and overseas.

The report reveals the extent of farmland used to grow crops that are being used to feed animals instead of people, and explores the benefits for people, climate and nature of using more of the UK’s arable land to grow crops for human consumption instead.

This would help to address the climate and nature crises while boosting the UK’s food resilience.

The latest report in WWF’s Future of Feed series highlights the fact that dairy and meat products provide only 32% of calories consumed in the UK, and less than half (48%) of protein.

In contrast, livestock and their feed make up 85% of the UK’s total land use for agriculture.

According to the analysis in the report, growing crops like cereals to feed farm animals accounts for a significant proportion of this land use footprint.

Wheat and barley grown to feed farmed animals in the UK use 2 million hectares of land – 40% of the UK’s arable land area.

Wheat grown in the UK each year to feed livestock (primarily chickens and pigs) makes up half of our annual wheat harvest and would be enough to produce nearly 11 billion loaves of bread.

Oats grown in the UK to feed livestock each year make up a third of our annual oat harvest and would be enough to produce nearly 6 billion bowls of porridge.

The UK imports large quantities of soy to feed pigs and poultry, fuelling the destruction of precious habitats overseas, like the Brazilian Cerrado.

Replacing animal feeds like soy and cereal with alternatives like grass, by-products from the food supply chain and innovative feed ingredients such as insect meal, would free up land to grow food for people.

These could include high-value crops like fruits, vegetables and nuts, and could be at the heart of a transition to nature-friendly regenerative agriculture.

‘With food prices soaring, we can’t afford to stay locked into a food system that’s not fit for purpose. Far too much of the food we eat is produced in ways that are fuelling the climate crisis and driving catastrophic nature loss, yet failing to deliver affordable, healthy food for all.

‘To make our food system truly shock-resistant we need to accelerate a shift to sustainable production, including rethinking the way we are using huge quantities of the UK’s most productive land to grow food for livestock instead of people.

‘UK governments can futureproof our food and bring huge benefits for nature and climate at the same time by ramping up support for farmers to transform our landscapes, making space for nature in farms and forests, fields and fens.’

KATE NORGROVE
Executive director of Advocacy and Campaigns at WWF

The report recognises that this approach to feeding farm animals would necessitate a reduction in overall numbers of livestock in the UK.

However, with the right incentives in place, it finds that UK beef and lamb, which are largely pasture fed, could be the backbone of a nature-friendly, regenerative approach to farming.

Livestock can play a critical role in fertilising the soil and – with effective safeguards in place for nature –  make use of areas of grazing land where it is not always possible to grow crops at scale.

While recognising the need to reduce livestock numbers overall, the report warns that focusing purely on the carbon footprint of food production risks fuelling agricultural intensification and masking other negative environmental impacts.

These include pollution from slurry or land conversion for feed production in chicken farming, which can have a low carbon footprint in comparison with pasture-fed beef.

The report highlights the importance of looking at a wider range of measures to evaluate the environmental impact of all aspects of food production, taking account of pressures on land, water and biodiversity before drawing conclusions.