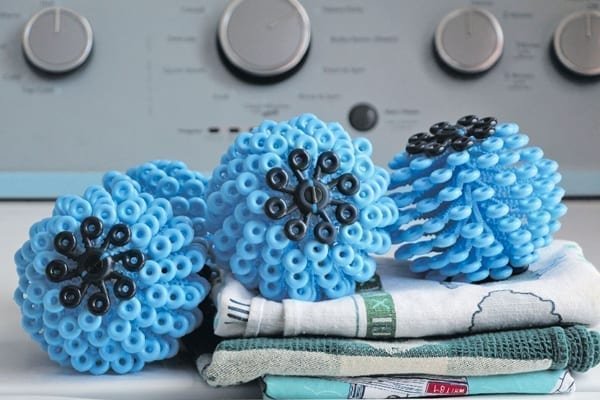 Each time an item of clothing is washed, up to 700,000 microscopic fibres make their way into our oceans. They add to the toxic soup in our waters; they’re swallowed by sea life and become incorporated into the food chain, potentially ending up on our plates.

Following research conducted in September 2018, the Institution of Mechanical Engineers called for ‘urgent action’ to prevent the 6 million microfibres released from a typical 5kg wash load of polyester fabrics from polluting our oceans. Now that action is possible – and it’s as simple as adding a small, reusable ball to your wash load.

Previously, anyone who wanted to catch microfibres from their washing had two options: a special laundry bag or a filter that goes on the wall. Now there’s a microfibre-catching laundry ball – and for ease of use and price (£29.99) it’s one of a kind.

Inspired by the way coral filters the ocean, the ball’s stalks collect microfibres from the water as it swooshes round the drum of the washing machine. Eventually these fibres ball up into visible pieces of fuzz that can be pulled from the Cora Ball by hand and put in the bin. This means they won’t re-attach to clothing or fly off into the air, only to become run-off and end up in our waterways.

The Cora Ball is made from 100% recycled and 100% recyclable soft and stretchy plastic that will maintain its physical and chemical properties in the temperature extremes of both residential and commercial washers and dryers. Designed to be a long-lasting and durable product, it should withstand five years of normal washing.

The Cora Ball hit the UK in May 2018, after a successful Kickstarter campaign in 2017. It’s now available in over 60 countries, with sales going strong in the UK, the Netherlands, Scandinavia, Australia and the USA, where the balls are made.

‘These balls are at the forefront of the battle against plastics pollution’, says Selchouk Sami, founder and CEO of Rainbow Brands – the UK distributor of Cora Ball. ‘They can help anyone who wears and washes clothes to make a difference by immediately helping to stop microfibre pollution. An independent, peer-reviewed paper by the University of Toronto, published in Marine Pollution Bulletin, found that a Cora Ball catches 26% of the fibres that would otherwise be washed down the drain, based on a fleece blanket. The paper also pointed out something important: that lots of people making just one small effort can have a big positive impact – in this case, on our lakes, rivers, bays and ocean.’

Click here to find out why the Cora Ball is a MyGreenPod.com Hero

The potential impact of small collective actions is a significant point for Selchouk, who has always been interested in finding powerful brands, analysing their appeal and calculating the impact they have on consumers and society as a whole. ‘My appreciation of the importance of sustainability in business was reinforced when I attended the P.E.A. Awards in 2014’, he tells us. ‘The event really got me thinking.’

The power of collective change

Selchouk set up Rainbow Brands towards the end of 2017, determined to build a business that connects with people, provokes thought and helps effect collective positive change. ‘I am a solicitor and my wife an accountant’, he tells us. ‘We both lead busy lifestyles and, while this can be rewarding, it can also lead to unhealthy levels of stress.’

The mission with Rainbow Brands is to celebrate the great outdoors and sell premium products that promote healthy lifestyles, while helping to alleviate stress on individuals and the environment. The company is bringing together authentic and exciting brands that can inspire change for the better.

‘We are on the lookout for new and exciting brands that would fit well with our mission’, Selchouk says, ‘so do get in touch – it’s an exciting time to be collaborating! We will be attending a number of events this year, so come and say hello if you are free. We will be in St Albans in February and May, The Festival of Sustainable Fashion in April and in Lee Valley with British Canoeing for the Slalom World Cup from 14 to 16 June 2019, to mention a few.’

Selchouk discovered Cora Ball when he met its founder, Rachael Miller, at a conference in Germany in 2018. ‘It’s a great product, an authentic brand and really everything we are looking for at Rainbow Brands’, Selchouk says. ‘It was a perfect fit for the brands we distributed at the time, so it was really a rather easy decision.’

As well as catching microfibres, the Cora Ball serves as a reminder that our drains are connected to the natural world. As a result this small, unassuming ball has the power to inspire other behaviours that would help us live in a way that helps protect, rather than destroy, our natural world.

Click here to buy the Cora Ball and view other products from Rainbow Brands.