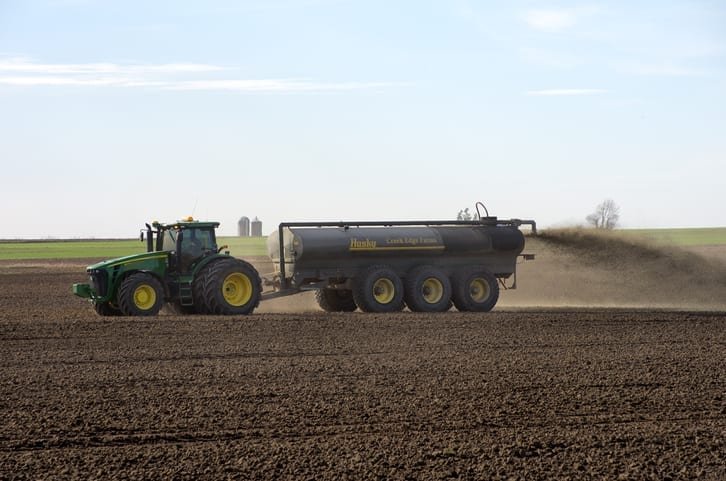 The UK government’s environment watchdog has failed to take action on a still-unpublished report, submitted to it over two years ago, that warns of a cocktail of contaminants found at potentially harmful levels in sewage sludge used as fertiliser on farmland.

The report was obtained under the Freedom of Information Act by Unearthed, Greenpeace UK’s investigative journalism unit.

It details the results of an investigation into the ‘landspreading’ industry – the use of sewage sludge, mainly human waste, as fertiliser on farmland – carried out on behalf of the Environment Agency.

As part of the investigation, sewage sludge and soil samples were tested at more than 54 farms and eight sludge treatment sites across the UK.

Results found evidence of widespread contamination from plastics and microplastics that could ultimately leave the soil ‘unsuitable for agriculture’, as well as pollutants such as dioxins, furans, benzo(a)pyrene and polychlorinated biphenyls (PCBs) at levels that could ‘pose a risk to human health’ in a number of the samples.

The tests also found salmonella and ‘high concentrations of e-coli’ – both bacteria can cause serious or even fatal infections.

UK regulations on the use of sewage sludge in agriculture date back to the late-80s, and the legal controls on contaminants in sludge have barely changed since then. They largely focus on killing bacteria and limiting concentrations of fluoride and a short list of heavy metals.

However, the report warns that the sludge tested by investigators contained a range of potentially harmful contaminants – including herbicides, antimicrobial chemicals and ‘persistent organic pollutants’ – that are not routinely tested for by water or sludge spreaders.

Despite this, around 80% of the sewage sludge produced in the UK ends up on agricultural land – roughly 170,000 truckloads a year.

‘This toxic cocktail of plastic and chemicals should be nowhere near our farms and fields. The Environment Agency has known about this for over two years, yet there’s no evidence that any real action has been taken.

‘A broken regulatory system is failing our countryside, farmers and neighbouring communities, yet no one’s busy fixing it. Rather than waiting for the proverbial to hit the fan, the least the Agency should do is immediately launch a full-scale investigation and work with ministers on tightening the rules.’

A growing number of middlemen, waste brokers, contractors and subcontractors involved in these supply chains, coupled with the practice of mixing together wastes from different sources, has led to greater risk of contamination.

The investigators warned that this complexity increased the threat of unscrupulous operators using landspreading of inappropriate waste on fields simply as a ‘cost-effective method of waste disposal’.

‘That there are analogies between the way this system operates and the one that led to the horsemeat scandal is undeniable, with shady middlemen capitalising on regulatory failures and opaque supply chains to abuse a system short on rules.

‘If we don’t want our land to be contaminated by toxic sewage, the system needs a complete overhaul and funding to match. That means regulations that are fit for purpose, testing for all pollutants found in sewage sludge, restriction on the spreading of these harmful toxins and plastics onto farmland, adequate inspection and enforcement, and punishment for those that abuse the system or turn a blind eye, be it the water companies, farmers or anyone in between.’

Greenpeace UK is calling for further investigations and tests into the contaminants found in sewage sludge and their subsequent impact on the land, food and human health.

Reforms to the regulations and control of landspreading must then be introduced, with legal limits set for pollutants that are found to have detrimental impacts.