Make cash from your lights IViTi Lighting’s designers, Jenson and Tony, were a bit bemused when they first met PEA Award-winning Nick Williams. The Lighting Association had suggested it would be ‘a good thing’ for them to get together – but the fresh-faced young man with tousled hair and a ready smile wasn’t quite the genius inventor that iViTi had been expecting. 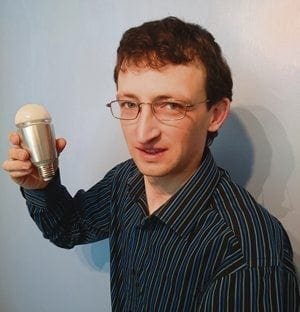 Nick talked, they listened – and before long the iViTi team was ‘stunned, euphoric and full of admiration.’ Nick had brought two fantastic inventions to the table: the iViTi ON and the iViTi AdrON. Together, these lights can help homes and businesses cut carbon emissions, reduce pressure on the grid and stay on when the power’s off.

Keeping the lights on

The iViTi ON is a safety lamp for the home that stays on when there’s no mains power, thanks to an automatic switch that detects when there’s a power cut and the light hasn’t just been turned off at the switch.

The patented ‘Automatic Switching Safety Lamp’ operates just like any other standard LED GLS (General Lighting Service) lamp, but when there’s a power cut the iViTi ON instantly and undetectably switches to draw energy from its own battery.

The light can run off the battery for up to three hours, and can be turned on and off at the switch as usual. When the electricity supply is reconnected, the lamp switches back to the mains power supply and the battery is recharged.

The hope is that, like smoke detectors and burglar alarms, the 9.5W iViTi ON LED lamp will become a standard safety feature of our homes.

Nick’s second invention is the AdrON, which stands for ‘Automatic Demand Response in Lighting’. IViTi has called Nick’s ‘battery in a bulb’ the ‘greenest, least disruptive solution to grid energy smoothing and balancing during peak demand times.’

The AdrON is an LED light that has real-time demand grid-monitoring software – or ‘Automated Demand Response’ (ADR) technology – either inside or, if an LED bulb is retrofitted with the technology, on the outside.

When the grid’s system frequency drops below a certain value, that indicates that it’s under pressure and struggling to supply to demand.

During these peak times, such as halftime in the FA Cup final, there’s a massive surge because, as a country, we require so much power – so the AdrON automatically stops drawing energy from the grid and switches to its own internal battery. The lamp reverts back to mains power when the grid gets back to normal.

When the the grid’s system frequency exceeds a certain value and there is a surplus of power – on sunny days when the wind’s blowing and people don’t have their heating on full blast, for example – lots of low-carbon power is available that can be used to recharge the bulb. The batteries mop up any excess power that would otherwise be wasted.

Thanks to its very high speed of response, the AdrON can reduce the grid’s need to call on backup power from older, more expensive and dirtier coal-fi red generators during peak demand times. On cold, dark winter evenings when dinners are being cooked and electric cars are recharging, there would be significantly fewer calls to the coal and gas power stations – which in turn would reduce greenhouse gas emissions and costs.

Irrespective of grid pressure, the technology can also switch the bulb to battery power when the user’s energy tariff is at its highest price. This will result in major cost savings for the user, and in some cases spare, pre-purchased energy can be re-sold back to the grid.

IViTi’s AdrON and ON products have had support from the Welsh Government and encouragement from National Grid. That’s no major surprise: lighting accounts for 18% of the UK’s energy consumption and these products promise predictable, automatic, instantaneous balancing to a grid that struggles to balance its own power.

The iViTi AdrON will be manufactured this year at Sony UK TEC, so when the product hits the market it will have been invented, designed and made in the UK. It will also be a truly global product – especially in countries where grids are unreliable – which will help to create more jobs in the UK.

2015 is the International Year of Light and Light-Based Technologies, a global initiative adopted by the UN. It’s also the year that you might be able to start drawing cash from your light bulbs.

To find out more about the ON and AdrON, visit iViTi’s website