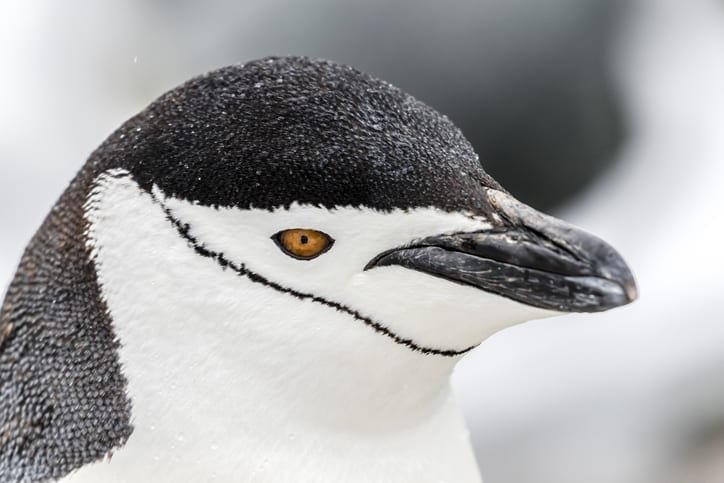 Scientists surveying chinstrap penguin colonies in the Antarctic have found that the impacts of climate change have led to drastic reductions of chinstraps in many colonies, with some declining by as much as 77% since they were last surveyed almost 50 years ago.

The independent researchers, who joined a Greenpeace expedition to the region, found that penguin numbers had declined in every colony surveyed on Elephant Island, an important penguin habitat northeast of the Antarctic Peninsula.

The overall number of chinstrap penguins on Elephant Island has dropped almost 60% since the last survey in 1971, with a total count now of only 52,786 breeding pairs. This has plummeted from previous survey figures of 122,550 pairs.

This dramatic decline can largely be attributed to the impacts of climate change. Reduced sea ice and warmer oceans have led to less krill, the primary food source of chinstrap penguins.

The new research emerges just after Antarctic temperatures reportedly reached a record high of 18.3ºC on 06 Feb. The previous highest recorded temperature was 17.5ºC, on 24 March 2015.

Dr Heather J. Lynch, Associate Professor of Ecology & Evolution at Stony Brook University, is one of the expedition’s research leads. She said: ‘Such significant declines in penguin numbers suggest that the Southern Ocean’s ecosystem has fundamentally changed in the last 50 years, and that the impacts of this are rippling up the food web to species like chinstrap penguins.

‘While several factors may have a role to play, all the evidence we have points to climate change as being responsible for the changes we are seeing.’

‘Penguins are an iconic species but this new research shows how the climate emergency is decimating their numbers and having far-reaching impacts on wildlife in the most remote corners of Earth. 2020 is a critical year for our oceans. Governments must respond to the science and agree a strong Global Ocean Treaty at the United Nations this spring, that can create a network of ocean sanctuaries to protect marine life and help these creatures adapt to our rapidly changing climate.’

The team of scientists, from Stony Brook and Northeastern University, has also been surveying a series of large but relatively unknown chinstrap penguin colonies on Low Island, using manual and drone surveying techniques.

This will be the first time the island, thought to have around 100,000 breeding pairs of chinstrap penguins, has been properly surveyed from land and by air, with results to follow.

To bring the news home to world leaders, campaigners this week have been installing ‘disappearing’ penguin ice sculptures in capital cities around the world including Seoul, Cape Town and Buenos Aries.

In London, Greenpeace installed a two-metre high penguin mother and chick ice sculpture on the shores of the Thames opposite St. Paul’s Cathedral.

The campaigners are demanding urgent protection of ocean wildlife with a Global Ocean Treaty, which could lay the groundwork for a network of ocean sanctuaries covering 30% of the world’s oceans by 2030.

Greenpeace has been campaigning for the establishment of three Antarctic sanctuary proposals; after being rejected in 2019, they are due to be discussed again at this year’s Antarctic Ocean Commission (CCAMLR) meeting in October. These sanctuaries would offer protection for many of the colonies being surveyed.