Sadhguru’s mission to save the soil

Spiritual leader embarks on 30,000km motorcycle journey to save the world’s soil 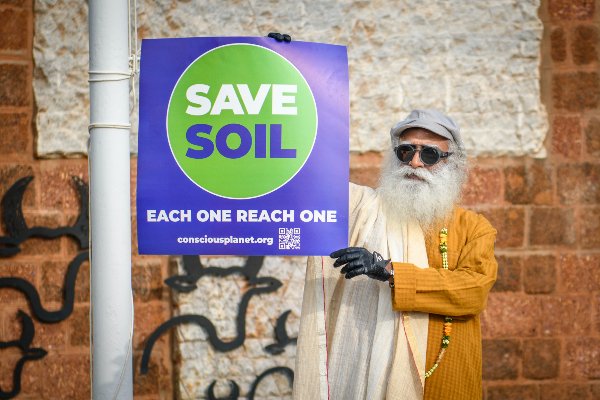 On 21 March Sadhguru, the world-renowned guru, spiritual leader and Indian icon, set off from London on a 30,000km motorcycle journey – through Europe, the Middle East and India – in an epic effort to save soil.

Sadhguru’s departure marked the official launch of ‘Save Soil’, an unprecedented global movement to prevent the catastrophic degradation of the world’s soil and the global food systems and countless species it supports.

The campaign will educate the public, businesses, politicians, charities and celebrities about the vital role that soil plays in the planet’s future. It will also push for meaningful and unprecedented policy change around the world, with the backing of the United Nations and World Food Programme.

We are losing our soil

52% of the Earth’s agricultural soil is already degraded; at the current rate, 90% of the world’s soil will be degraded by 2050.

To sustain humanity’s agriculture, the organic content within soil needs to be at least 3%; anything less and the soil starts to lose its ability to produce food with the necessary nutrients.

Some parts of the UK are 30-40 years away from ‘the fundamental eradication of soil fertility’; intensive agriculture has caused arable soils to lose 40 60% of their organic content.

Every second we lose an acre of soil. Without urgent change, food production could fall by more than 40% in 20 years and the gap between rich and poor will increase. Degraded soil is also less able to hold water, making flooding risks much higher.

The President of Guyana, H.E. President Dr Irfaan Ali, plus heads of government and ministers from five Caribbean nations, have endorsed Save Soil.

‘Every responsible scientist in the world and UN agencies are clearly saying we have 80 to 100 harvests left’, Sadhguru said; ‘that means approximately 45 to 50 years of agricultural soil left on the planet. By 2045, we will be producing 40% less food than what we are producing right now, and our population will be 9.3 billion people.’

Sadhguru went on to warn that the consequences of food shortages set to unfold over the next 25 years are ‘unimaginable’, and that civil wars will follow. ‘That’s not a world you would want to live in – nor a world to leave behind for the next generation’, he said, ‘but that is exactly what we are doing.’

How to save soil

The Conscious Planet Movement to Save Soil is a global civil movement to inspire a conscious approach to saving our soil and planet. First and foremost, it is a people’s movement.

The aim is to activate the support of over 3.5 billion people – over 60% of the world’s voting population of 5.26 billion – to make ecological issues an election priority for governments around the world.

Importantly, the Save Soil campaign will help governments to formulate and introduce policies that address soil health in their country, and make farming activity more soil friendly.

The campaign’s primary recommendation is for governments all over the world to legislate policies that mandate a minimum of 3-6% organic content in all agricultural soil in their country.

World leaders, influencers, artists, scientists, farmers, spiritual leaders and NGOs are among those who have pledged their support to rekindle humanity’s relationship with soil.

‘In democracies, governments craft policies based on what the majority population wants’, Sadhguru explained. ‘Currently, 5.26 billion people in the world live in democratic countries – they have the right to vote and elect their governments. If a majority of the population in each of these nations demands policies to revitalise soil, governments cannot ignore the issue. It will lead to policy changes around the world, in turn setting the stage for a comprehensive solution to revitalise soil.’

For Sadhguru this should be taken up as an ‘express mission’ by every citizen and every government on the planet. ‘All of us should stand up for the Conscious Planet movement’, he said. ‘This is not about me, this is not about you. This is a generational responsibility that we must fulfil.’