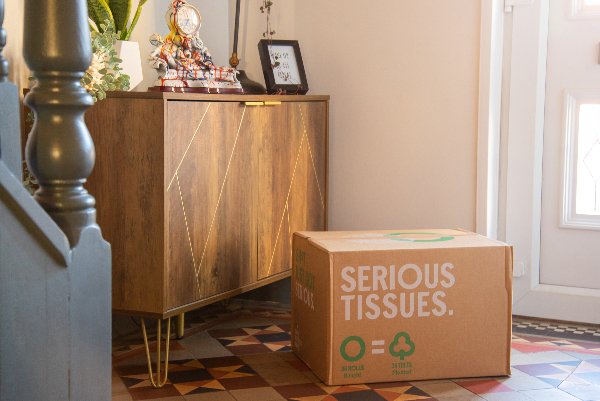 Each year 10 million trees – that have been growing for 20-30 years – are cut down and pulped to create toilet paper.

‘In a world where we need trees more than ever, this seems like absolute madness’, says Chris Baker, CEO and founder of Serious Tissues. ‘Turning a tree into the ultimate single-use product is almost criminal.’

Thankfully several alternative loo roll companies have sprung up in recent years; some use bamboo – the fastest-growing plant on Earth – which is a big shift in the right direction, but it might not be the most eco option.

All commercial bamboo is grown in China, meaning it must be shipped 20,000km to reach UK bathrooms. It’s also grown in monocultures, which isn’t great for biodiversity, and in extreme cases primary forest has been cleared to make way for the bamboo plantations.

‘We wanted to create the most sustainable toilet paper’, Chris tells us, ‘so being carbon neutral as quickly as possible was one of our key priorities.’

Achieving carbon neutrality was relatively straightforward for Chris and the team because they created a loo roll with inherently low emissions.

The paper is 100% recycled, meaning no new trees need to be chopped down, and it is mainly recovered from UK offices. The recycling and paper production is all done within the UK, so there’s no hefty shipping footprint.

On top of that a tree is planted for every roll sold; after just one year of business, Serious Tissues – now the UK’s first carbon-neutral toilet paper – is planting the equivalent of four Hyde Parks a week.

This loo roll has a number of other attractive credentials; no bleach is used – instead a process based on heat and water is used to remove ink and impurities from the paper – and no plastic or additional packaging is present in the supply chain.

‘Every minute enough plastic to fill a rubbish truck enters our oceans’, Chris says. ‘If we can reduce that – or at least not contribute to it – we are making a huge positive impact to the world. Every small action matters and helps to make a big difference.’

The meaning of life

As parents of eight kids under the age of 10, the four Serious Tissues co founders found they were growing increasingly concerned about climate change.

‘It was becoming clear the world our kids are going to grow up in will be very different’, Chris says. ‘We wanted to to do something about it.’

The friends were inspired by the quote: ‘The true meaning of life is to plant trees under whose shade you do not expect to sit’. ‘The sentiment really struck a chord with us’, Chris reveals.

In the first 18 months of business, Serious Tissues planted over 750,000 trees – a good chunk of shade for future generations to enjoy. The numbers rise quickly because a tree is planted for every roll sold rather than every transaction, so anyone who buys a standard box of 36 loo rolls gets 36 trees in the ground in one swift action.

If you subscribe for a year with a box every other month, you would plant 216 trees – a pretty amazing result from just changing how you wipe your bottom.

For the tree planting, Serious Tissues chose to partner with Eden Reforestation Projects in eight countries with a focus on tackling deforestation.

‘By planting in tropical climates, the trees grow a bit faster – particularly in mangroves – so carbon capture happens faster’, Chris explains. ‘We chose Eden Reforestation Projects because they are not only focused on tree planting but also on building and protecting communities; for us, that is a key part of being more sustainable.’

In the UK Serious Tissues works with The Tree Council, supporting the Queen’s Green Canopy for Her Majesty The Queen’s Platinum Jubilee. The project is expected to see 35,000 trees planted this year, which will tackle local problems such as as air pollution around schools.

‘We believe that if we can change people’s behaviour, we can change the world’, Chris tells us. Serious Tissues has made a great start: by the simple act of getting people to switch their loo roll, the company is well on its way to planting its first million trees – with many more to follow.

‘We’ve clearly got to push for more shifts’, Chris accepts, ‘but if people make the decision to spend their money with brands that are making a positive difference to the world, rather than making it worse, we can start to turn things round.’