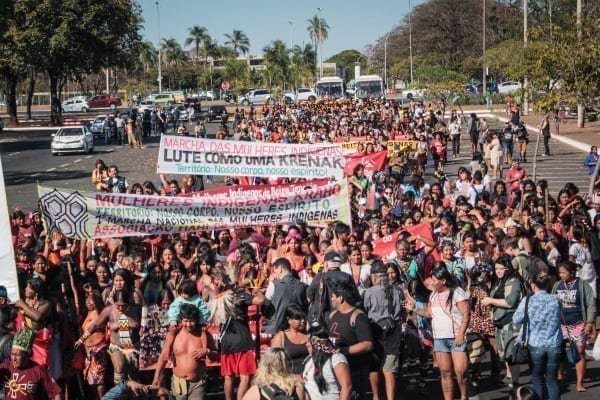 Today (13 August), more than 2,000 indigenous women leaders from across Brazil will stage a mobilisation in the nation’s capital as part of the country’s first Indigenous Women’s March.

Entitled ‘Territory: our body, our spirit’, this historic gathering is a response to escalating violations of indigenous rights under the Bolsonaro government, as native peoples and their lands fall increasingly under assault.

Organised by Brazil’s National Indigenous Movement and its convening organisation APIB (the Articulation of Brazil’s Indigenous Peoples), the aim of the mobilisation is to cease the government’s mounting socio-environmental rollbacks by strengthening women’s capacity to guarantee the human rights of native peoples, particularly through the preservation of the vast forests under indigenous stewardship.

‘It’s very important to be here in Brasilia to show the world that indigenous women are resisting attacks on our rights and the rollbacks of this government. We are staging our first women’s march counting on the presence, visibility, strength and spirituality of indigenous women. We are all warriors on the front lines of this struggle against today’s political situation, which is so adverse to our peoples. We also aim to raise awareness among the international community to build support for Brazil’s indigenous peoples. This is a global movement, a planetary movement.’

This spirited action to demand effective, quality healthcare in native communities was a cornerstone of the movement’s demands, and built momentum for today’s march.

‘For the first time in history, the indigenous women’s march convenes more than 100 different peoples in Brasilia with more than 2,000 women present. This is a movement that is not only symbolically important, but also historically and politically significant. When they try to take away our rights, it’s not enough to only defend our territories. We also need to occupy spaces beyond our villages, such as institutional spaces and political representativity.

‘We call on the international community to support us, to amplify our voices and our struggle against today’s legislative genocide, where our own government is authorising the slaughter and ethnocide of indigenous peoples. This is also an opportunity to join our voices to denounce this government’s ecocide, where the killing of mother nature is our collective concern.’

Together, these women-led movements aim to advance new vision of sustainable development and social justice in resistance to Bolsonaro’s ‘reckless socio-environmental agenda.’

‘As Bolsonaro and the Brazilian government attempt to dismantle fundamental indigenous rights and open indigenous territories to devastation, he faces resounding resistance from a movement led by women who best understand the importance of defending rights and territories for the health of Mother Earth and future generations. This week’s women’s mobilisation is a critical step forward in mounting effective opposition to the attacks of the Bolsonaro regime. The international community has a moral duty to stand in resistance with these indigenous women Earth Defenders who are defending their rights, lives and the Amazon rainforest for our collective benefit.’

Click here to read our article about why indigenous peoples are key to conservation.