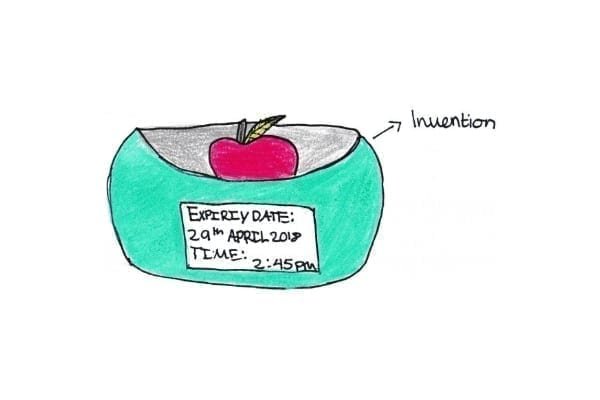 An 11-year-old schoolgirl has created a food waste-fighting fruit bowl in a bid to help Britain cut down the £13 billion-worth of food we bin each year.

The fruit bowl, named the ‘Alarm Cup’, notifies the owner when its contents have two days left until they expire. It was crowned the winner of the Ocado Food Waste Challenge with Little Inventors.

Currently in development phase, it can also pair with Ocado’s shopping app to prompt users to use up fruit with food waste-fighting recipes such as apple crumble and banana bread.

It was praised for its ability to prevent the nation from throwing away fruit by disrupting habits and routine thought processes.

Helen White, special advisor on household food waste at WRAP, said, ‘We were particularly impressed by Rumaan’s invention as it addresses one of the key issues behind food waste: behavioural patterns.’

While we’re all guilty of occasionally buying food without paying attention to expiry dates, Helen said this process ‘has become a habit for many.’

‘The Alarm Cup challenges this, disrupting the pattern and helping people unlearn the subconscious behaviours that cause household food waste’, she added.

Rumaan’s invention will be showcased as part of the Little Inventors stand at the Great Exhibition of the North this summer from now until Sunday 09 September.

Her invention triumphed over 500 entries from primary school Little Inventor workshops for one key reason: it challenges the thought processes and habits that lead to food waste.

Talking about her inspiration behind her idea, Rumaan said, ‘Apples are my favourite, but they were always going all soft when my mum left them out in the fruit bowl and forgot about them.’

‘Food belongs in bellies not bins. We were captivated by the children’s drawings and it was great to see so many imaginative ideas.

‘The Alarm Cup has the potential to truly make a difference when it comes to saving food from the bin – I think we’ve uncovered something very special. We’re testing the prototype at the moment, but we’re certainly keen to explore opportunities to roll this out and make it available on ocado.com for our customers.

Click here to find out how Yeo Valley and FareShare are tackling food waste.