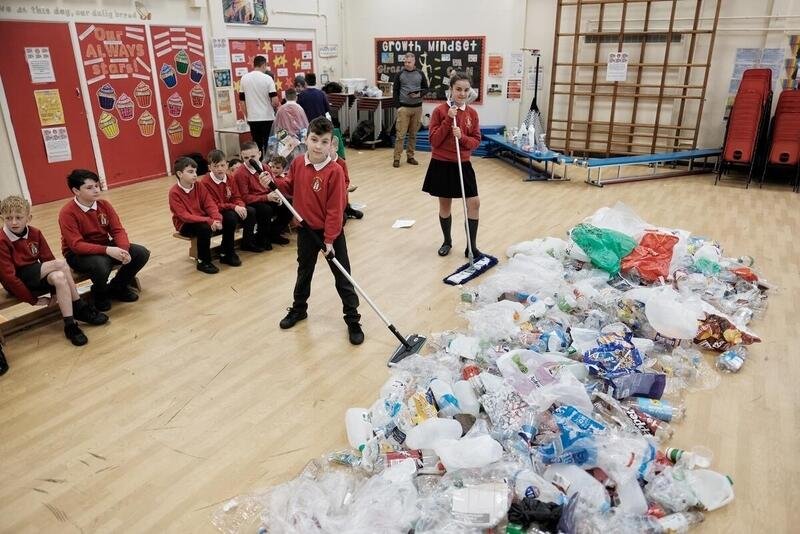 Nearly 100 billion pieces of plastic packaging are estimated to be thrown away by UK households every year, with just 12% likely to be recycled in Britain, according to the country’s largest ever survey of household plastic waste.

The Big Plastic Count campaign underlines the call made by environmental NGOs for the government to set legally binding targets to almost entirely eliminate single-use plastic, starting with a target of a 50% cut in single-use plastic by 2025.

Alternatives should be affordable, reusable and accessible, including to those with disabilities.

For one week in May, just under 100,000 households – nearly a quarter of a million people – across the UK counted their plastic packaging waste and sent their results to Greenpeace and Everyday Plastic as part of The Big Plastic Count.

The startling results suggest that the UK’s homes produce 96.6 billion pieces of plastic packaging waste a year, with only 12% being recycled in the UK.

83% of the plastic recorded was from food and drink packaging waste, with the most common item being fruit and veg packaging.

The UK government publishes data about the amount of plastic waste being collected from households by weight, but there are no official figures about the number of plastic items being thrown away.

‘The Big Plastic Count has galvanised nearly a quarter of a million people to investigate how much they throw away and what happens to their plastic waste. It is an incredible piece of citizen science that has allowed us to build a unique picture of the plastic problem and gather never-before-seen data. This is a big moment in the fight against plastic waste. These new figures lay bare the responsibility of the government, big brands and supermarkets to tackle this crisis, and they must rise to the challenge right now – there is no time to waste.’

97,948 households across the UK counted 6,437,813 pieces of plastic packaging waste as part of the Big Plastic Count.

On average, each household threw away 66 pieces of plastic packaging in one week, which amounts to an estimated 3,432 pieces when applied over a year.

If we assume that the weekly average is typical of every household in the UK, we can reasonably estimate that households throw away 1.85 billion pieces of plastic packaging a week. Over a year, that equates to 96.6 billion pieces – in the UK alone.

Food and drink packaging made up an overwhelming majority (83%) of the waste generated during the Count week.

Only 12% of this plastic waste is likely to be recycled at reprocessing facilities in the UK.

‘This is a jaw-dropping amount of plastic waste and should give ministers pause for thought. Just 12% of all this plastic is likely to actually end up being recycled in the UK, despite the public’s alarm about the issue and efforts to recycle. The rest becomes pollution, whether through landfilling, incineration or export to countries all around the world, gradually contaminating everything – our water, our food, even the air we breathe.

‘The only solution is to turn off the plastic tap, through the government introducing a legally binding target for a 50% reduction in single-use plastic by 2025. Pretending we can sort this with recycling is just industry greenwash. We’re creating a hundred billion bits of waste plastic a year, and recycling is hardly making a dent. What else do the government need to know before they act?’

Under the Environment Act, Defra has the power to set long-term, legally binding targets to tackle plastic pollution and transition to a circular economy. Ambitious action is needed now.