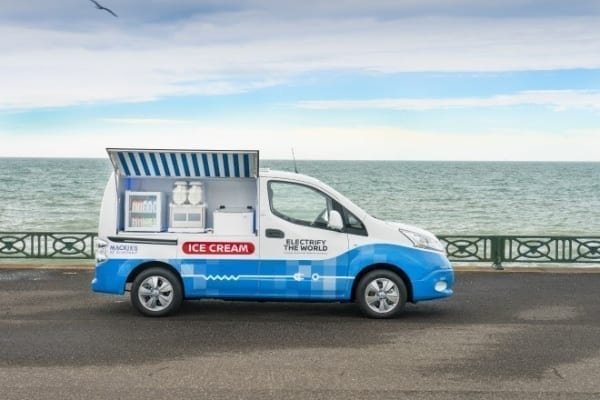 Charging EVs at the supermarket

Unlike mainstream ice cream vans, the zero emissions vehicle, created in partnership with Mackie’s of Scotland, doesn’t pump out harmful emissions as parents and children queue up outside.

Parents and children currently find themselves queueing up for an ice cream while a van pumps out harmful emissions from its idling engine.

The fumes inhaled from idling ice cream van engines are prompting councils across the UK to consider banning them in town centres, and older vans in London face huge costs to drive into the Ultra Low Emission Zone.

The prototype, which is based on the Nissan e-NV200 electric van, has been fitted with a soft-serve machine, freezer drawer and drinks fridge.

Ice cream is served from a hatch that opens in the side of the vehicle, with the vendor dispensing ice cream standing next to the van.

It also has contactless bank card and smartphone payments via a ‘tap-to-pay’ panel mounted on the side of the van.

The van has a driving range of up to 124 miles between charges, courtesy of the 40kWh battery. The equipment is powered by the newly unveiled Nissan Energy ROAM.

The power packs can be recharged from either a 230v mains supply or the solar panel array on the van’s roof.

‘Ice cream is enjoyed the world over, but consumers are increasingly mindful of the environmental impact of how we produce such treats, and the ‘last mile’ of how they reach us.

‘This project is a perfect demonstration of Nissan’s Intelligent Mobility strategy, applying more than a decade of EV experience and progress in battery technology to create cleaner solutions for power on the go – in ways customers might not expect.

‘By eliminating harmful tailpipe emissions, and increasing our use of renewable energy, we can help make this a better world for everyone.’

And instead of a speaker playing a jingle to attract customers, the concept has a smart button that generates a tweet of the van’s precise location using the global addressing service What3Words.

What3Words divides the entire world into 3m x 3m locations, each with a unique three word address. As an example, ///trendy.angel.define is a spot on Brighton & Hove’s seafront.

It means customers can easily find the exact location of the van in a park or sea front where normal street addressing would not apply.

Through a V2G (Vehicle-to-Grid) charger, the e-NV200’s battery can be used to store surplus energy from the National Grid and then provide it back to the grid when it’s needed.

This technology can help to balance out the peaks in national energy demands, as well as providing EV owners with additional revenue from their vehicle when it’s not being driven.

Click here to read our interview with myenergi’s Jordan Brompton, on EVs and the shift in mainstream consciousness.