How one man from Somerset plans to change the world 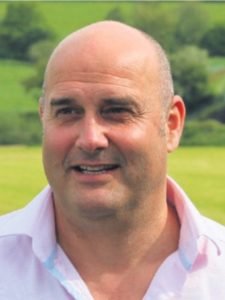 ‘Green’ commitments can be used to brush up a company’s image and help to boost sales, but to live and breathe sustainability takes serious perseverance, meticulous planning and a lot of heart. One man with firsthand experience of all those things is Richard Clothier, managing director at Wyke Farms in Somerset.

Farming – and therefore food production – is among the biggest contributors to greenhouse gas emissions and water use. On top of that, a growing global population and increasing demand for western diets mean the world will need to produce more food over the next 50 years than it has in the last 10,000 years combined.

While the truth may be daunting – particularly to anyone in the food and farming industry – Richard sees it as an opportunity to revolutionise the entire sector. ‘With 85% of the UK’s total land footprint associated with meat and dairy production, farmers are perfectly positioned to be environmental stewards and pioneers of sustainable business’, he tells us. ‘Not just in the UK, worldwide.’

Richard’s overarching goal is to lead by example and make his 150-year-old family business as environmentally friendly as possible. One of the biggest successes of his ‘practical environmentalism’ is that the entire working farm is now powered by solar and biogas generated from otherwise useless farm and dairy waste.

Richard’s commitment to Wkye Farms’ ‘100% Green’ project initially ploughed the company into £17m of debt, but his faith in the project has been rewarded: Wyke Farms is the first dairy business to achieve triple certification to the Carbon Trust Standard for reducing carbon, waste and water.

Wyke Farms’ biogas plant has saved over 5m kilos of CO2 and £2m in energy costs, and the solar panels produce 80,000kWh of energy per year, saving over 42 tonnes of CO2.

A DIFFERENT WAY TO OPERATE

Alongside the energy savings, the biogas plant makes use of the 75,000 tonnes of waste that would otherwise be carried away each year, and by using the digestate from Wyke Farms’ biogas plant, local farmers save 1.5m kilos of CO2 annually.

Wyke Farms is also helping to transform the industry from the inside out by offering a premium of 00.25p per litre to milk suppliers who adopt greener working practices on their own farms, whether they choose to install small anaerobic digesters, solar arrays or water recovery systems.

‘We believe that food and dairy farming is lagging behind other sectors in terms of environmental commitment’, Richard acknowledges. ‘We want to show that there is a different way to operate that will also save cost and drive efficiencies.’

Richard’s journey has become a source of inspiration for others – from customers and the wider farming community to businesses around the globe. Wyke Farms exports to over 163 countries, and has new distribution deals in place in the US, Hong Kong, India, China and Africa. Its current annual export turnover of £12.5m is expected to double in the next three years.

Richard sees all new and established international partnerships as opportunities to share Wyke Farms’ sustainability mission outside of the UK, and to inspire others with his success story. Like his grandparents, Richard truly believes that if you look after Nature, then Nature will look after you – and he wants to tell the world.

Richard is asking the public to challenge food suppliers to be more environmentally responsible. To be part of the change, ask the brands you regularly buy from whether they have a sustainability policy in place and what it is. Tweet your findings to @wykefarms.

Click here to find out more about Wyke Farrms and Richard’s green dream.