World leaders have reached a legally binding agreement at COP21 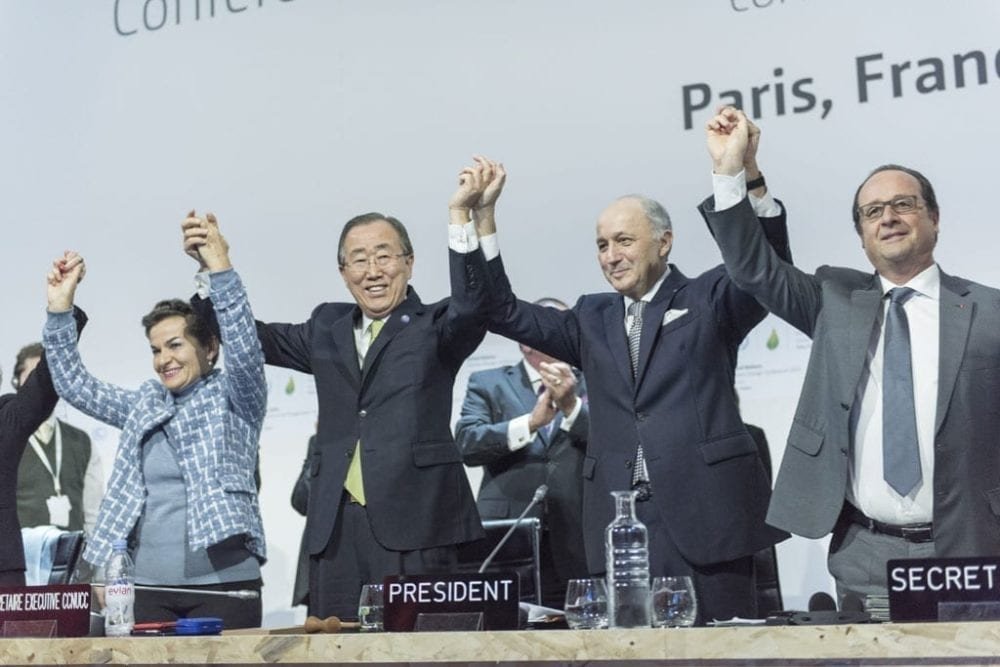 Government representatives made history yesterday when the new Paris Agreement on climate change was adopted.

Gaveling the Agreement with a green hammer, the French Foreign Minister and President of COP21, Laurent Fabius, announced the historic news – a moment greeted with loud applause and cheers. Many delegates hugged while others reportedly had tears in their eyes.

‘The Paris Agreement is a monumental triumph for people and our planet. It sets the stage for progress in ending poverty, strengthening peace and ensuring a life of dignity and opportunity for all.’

For the first time, 195 Parties to the UN Framework Convention on Climate Change (UNFCCC) joined to take common climate action and pledged to curb emissions and strengthen resilience. This followed two weeks of negotiations at the United Nations climate change conference (COP21).

The universal agreement’s main aim is to keep a global temperature rise this century well below 2ºC, and to drive efforts to limit the temperature increase even further to 1.5ºC above pre-industrial levels.

‘All countries have agreed to hold global temperature rise to well below 2ºC. And recognising the risk of grave consequences, you have further agreed to pursue efforts to limit temperature increase to 1.5 degrees.’

The Paris Agreement is a Treaty under international law, so it is legally binding. But the national targets (INDCs) aren’t legally binding and nor are the financial commitments. This is primarily to enable the United States to be part of the global agreement.

The ‘Long Term Goal’ is ‘to achieve a balance between anthropogenic emissions by sources and removals by sinks of greenhouse gases in the second half of this century’. While not written in the clearest language, when combined with the 1.5ºC limit there’s an implied goal of achieving net zero in all emissions by around 2060-2080. This effectively means we need to phase out fossil fuels by 2050.

The Paris Agreement acknowledges that countries should respect and promote human rights in addressing climate change.

Indigenous People’s rights are in the pre-amble and in the Adaptation section of the Agreement, but they’re not awarded the protection they deserve – particularly given that forest protection will be key to achieving 1.5ºC.

The conference saw good initiatives around renewables during the negotiations – including India’s Solar Initiative, the launch of the Africa Renewable Energy Initiative and mayors and leaders of more than 1000 cities giving their support to a 100% renewable energy future. However, they were presented outside the official talks.

In the text itself, renewables are recognised in the context of promoting universal access to sustainable energy in developing countries, in particular in Africa, through the enhanced deployment of renewable energy.

‘The deal sets out the objective of limiting temperature rises to 1.5 degrees, but the emissions targets on the table take us closer to 3 degrees. That’s a critical problem, but it’s one with a solution. Renewable energy is already doing heavy-lifting across the globe, but now its moment must come. It’s the only technology mentioned in the Paris Agreement.

‘There’s a yawning gap in this deal, but it can be bridged by clean technology. We’re in a race between the roll-out of renewables and rising temperatures, and the Paris Agreement could give renewables a vital boost. The wheel of climate action turns slowly, but in Paris it has turned.’

A review mechanism has been established whereby every five years, beginning in 2018, Parties will regularly review what is needed in line with science.

Highlighting the role of the private sector, the UN chief said business leaders came to Paris in unprecedented numbers, and that ‘powerful’ climate solutions are already available – with many more yet to come.

‘With these elements in place, markets now have the clear signal they need to unleash the full force of human ingenuity and scale up investments that will generate low-emissions, resilient growth. What was once unthinkable has now become unstoppable.’

For the UN, the Paris Agreement and the outcomes of COP21 ‘cover all the crucial areas identified as essential for a landmark conclusion’. The Secretary-General concluded that negotiators reached ‘solid results on all key points’, with an agreement that demonstrates solidarity and ‘is ambitious, flexible, credible and durable.’

‘You’ve done it, reached an ambitious agreement, a binding agreement, a universal agreement. Never will I be able to express more gratitude to a conference. You can be proud to stand before your children and grandchildren.’

Click here to find out more about the Paris Agreement.