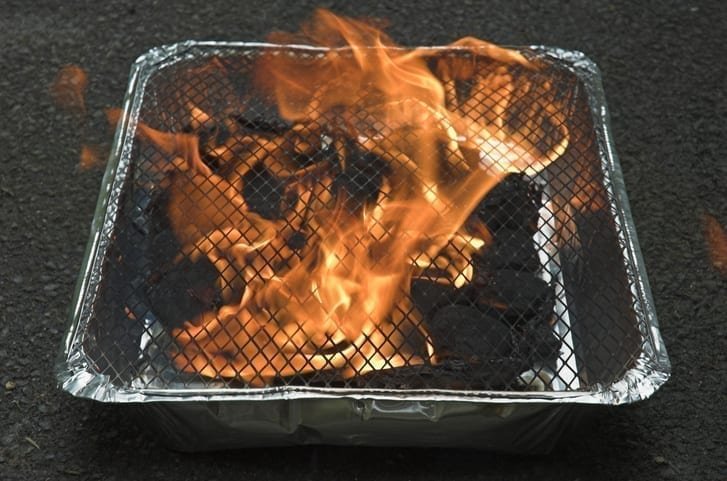 Disposable BBQs ‘should be banned’ to prevent further devastating wildfires

As wildfires raced through even more acres of British countryside, devastating the beautiful Ilkley Moor, calls were made to prevent further damage by banning disposable barbecues.

The ancient moorland, in West Yorkshire, saw two fires over the Bank Holiday weekend – despite laws, dating back to 1900, prohibiting citizens from having fires on the moor.

Firefighters tackled the blazes for several days to control the damage, but a number of eyewitnesses were appalled to report that there were still thrill-seekers holding barbecues in the area.

Recycling and waste disposal experts BusinessWaste.co.uk have called for the disposable barbecues – often costing as little as two or three pounds – to be banned.

There are a number of downsides to using the cheap grills – not least of which is their throwaway nature, which (combined with their cheap price) means they perpetuate the harmful ‘single-use’ culture which threatens the environment.

Disposable barbecues also contain charcoal, which is normally unsustainably sourced, contributing to the desertification of forest. Disposable barbecues can’t be recycled or composted, meaning that for each one sold in the UK each year – estimated at over a million – new waste committed to landfill.

‘One supermarket chain alone sold 300,000 disposable barbecues last year – that means there are likely over a million of them sold each year, each one contributing to ruining forests for charcoal and adding to piles of waste in landfill. While most people will dispose of them safely, even a small percentage failing to do so could have drastic consequences for the local flora and fauna. Banning them wouldn’t mean the end of the great British barbecue – but it would mean the end of a throwaway attitude to something which can do real harm.’

BusinessWaste.co.uk has called for ‘swift and decisive’ action to be taken by some of the biggest retailers in the Ilkley area and across the UK, including Tesco, Booths and Co-op.

The company says a move to immediately ban the sale of disposable barbecues would reduce anti-social behaviour, cut down on littering and show a real commitment to improving both their local and national green credentials. To date no response has been provided.

Mark Hall concluded: ‘It’s truly heartbreaking to see huge areas of iconic British countryside damaged due to the thoughtless and selfish actions of a few – and we would strongly urge retailers to reconsider selling disposable BBQs, which are very often the source of wildfires.

‘Being based a stone’s throw from [the] fire on Ilkley Moor, we’ve seen firsthand the devastation that can be done, and we are indebted to the incredible, tireless fire service who have been ensuring nobody was hurt.

‘As amazing as the emergency services have been, we shouldn’t have to rely on already-stretched public services to tackle completely preventable damage. Items which are not only environmentally unfriendly due to their packaging and disposal, but also repeatedly cause enormous, irreparable damage to our countryside should be banned without question, and it is our duty to champion that cause.’

Click here to find out why hot stone cooking could mean you never use your BBQ again.