Investigation reveals the UK is exporting thousands of tonnes of toxic, banned pesticides 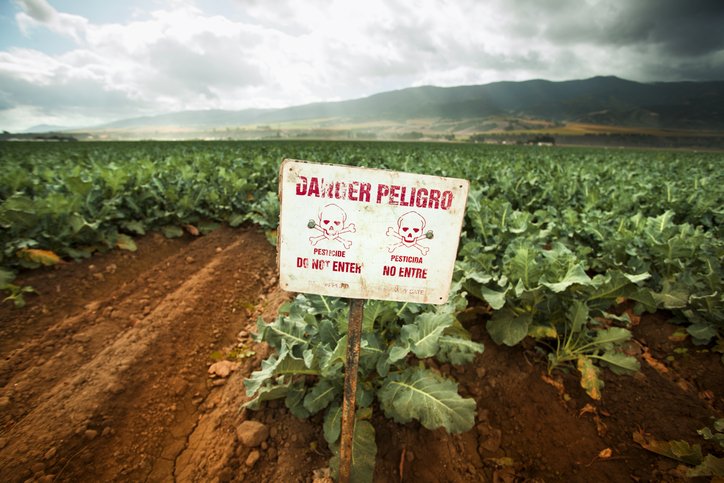 Documents obtained under freedom of information rules show how UK-based chemical companies notified the export of multiple hazardous pesticides that are banned from use on the UK’s own farms and fields in 2020.

The findings have been published as part of a new investigation by Unearthed and Public Eye.

The investigation found that UK companies exported seven different banned agrochemicals overseas in that year, and submitted applications to export a further six – a much wider range of prohibited pesticides being shipped from the UK than previously revealed.

They included weedkillers containing paraquat, a notoriously dangerous herbicide that has caused tens of thousands of deaths across the world from acute poisoning; insecticides containing imidacloprid, a controversial ‘neonicotinoid’ that was banned in the UK because of the serious damage it can cause to bee populations; and a fungicide called propiconazole, banned after it was found capable of harming babies in the womb.

There are also concerns about the threat of groundwater contamination by breakdown products of propiconazole, and that the chemical caused ‘toxic effects on the endocrine organs’.

Syngenta notified planned exports of propiconazole to Kenya and Tunisia, in mixtures also containing chlorothalonil. This fungicide was banned at the same time, despite being the most heavily used pesticide in the UK, due to concerns including groundwater contamination, damage to DNA and a ‘high risk to amphibians and fish’.

The Health and Safety Executive (HSE), which regulates UK exports of prohibited chemicals, has confirmed that in that year British exporters shipped pesticide products overseas containing 12,240 tonnes of chemicals banned from use in UK fields.

UK-based companies notified exports of agricultural products containing those chemicals to 20 different countries; four-fifths of those intended destinations were low- or middle-income countries (LMICs) such as Brazil, Colombia and India, where experts say hazardous pesticide use poses the greatest risks.

However, by far the UK’s biggest intended destination for these exports by weight was the United States, mainly due to an enormous planned shipment of paraquat.

UK not bound by EU rules

A 2020 investigation by Unearthed and Public Eye exposed the vast quantities of banned pesticides shipped out of Europe in 2018, of which the UK was by far the biggest exporter.

Following that investigation, the European Commission made a commitment to stop the practice of EU factories being allowed to manufacture hazardous chemicals for export that are banned from use in Europe.

The Commission intends to bring forward concrete proposals next year to ensure that ‘hazardous chemicals banned in the European Union are not produced for export’.

However, since leaving the European Union the UK is no longer bound by the EU’s chemical export regulations, which means exporters in the UK would not be affected by an EU-wide clampdown.

Despite promises that the UK would maintain and enhance its environmental standards after Brexit, the UK government has so far refused to commit to following Europe’s lead by bringing forward its own legislation to stop its own factories exporting hazardous banned chemicals.

‘By allowing UK-based companies to export harmful chemicals banned for use on our farms the UK government is behaving like a drug baron with the motto ‘don’t get high on your own supply’. These double standards are deeply cynical and morally indefensible.

‘Far from acting like an environmental leader, the UK government is failing to keep up with the European Commission, who have rightly committed to ending export of these banned chemicals. Ministers should consider the damage this toxic trade is doing to people and wildlife and should outlaw it immediately.’

Greenpeace is calling for the UK government to make good on its promise to uphold environmental standards after leaving the EU and make an immediate commitment to ban the manufacturing and export of banned pesticides in the UK. This must be followed up by bringing in legislation to end the practice for good.