Rob Shorter, communities and art lead at Doughnut Economics Action Lab, shares what happened when Leeds got a taste of the Doughnut 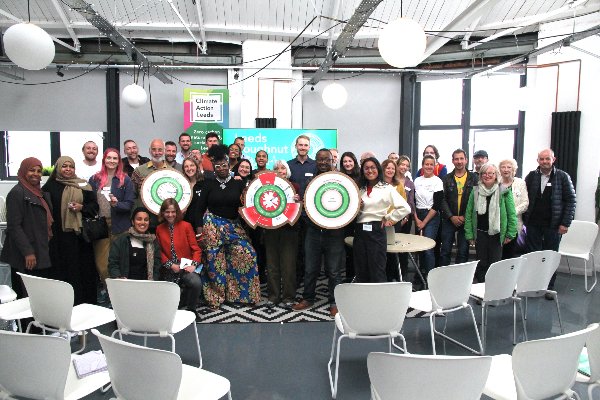 We live in a complex world – and ongoing crises, from climate breakdown to pandemic to war, are revealing the true complexity of the interconnected systems upon which we depend.

However, the economic thinking we have inherited from the 20th century, which underpins today’s business models and public policy, attempts to brush aside this complexity and distil progress as a single measure (GDP growth), casting the degradation of the living world and the deprivation of billions as ‘externalities’.

‘The complexity doesn’t go away if you ignore it’, says Immy Kaur, co-founder of Civic Square, addressing a room (and online Zoom audience) full of researchers, policy makers, politicians, social entrepreneurs, community activists and residents at the Open Data Institute in Leeds.

It’s 28 April 2022 and we have gathered together to launch the Leeds Doughnut, a report created by Climate Action Leeds and Leeds University.

It’s based on the ideas of Doughnut Economics, and asks what it would mean to create a safe and thriving Leeds that respects the wellbeing of all people and the health of the whole planet.

There’s no doubt about it, this is a big question. But it’s one that makes space for the complexity so often ignored in mainstream economics – and it’s a question everyone is invited to embrace as a starting point for conversation and action.

What is The Doughnut?

Taking a step back, the goal of the ‘Doughnut’ within Doughnut Economics is to meet the needs of all within the means of the living planet.

That means leaving no one falling short on the essentials of life (below the Doughnut’s inner ring) while also not overshooting the planetary boundaries of Earth’s life-supporting systems (beyond the Doughnut’s outer ring).

We want to be between these two concentric rings – in the space of the Doughnut, which we call ‘the safe and just space for humanity’.

The question that’s been asked ever since the Doughnut was published in 2011 is this: what does this global goal mean for the neighbourhoods, cities, districts or nations where we live?

With the launch of the Leeds Doughnut report, Leeds now joins 40 places around the world that are exploring this question – from Copenhagen to Curaçao, Birmingham to Bhutan, Melbourne to Mexico City.

To support this process, we at Doughnut Economics Action Lab (DEAL) have created a new set of tools – called ‘Doughnut Unrolled’ – to conceptually ‘unroll’ the Doughnut and introduce a local dimension to this global goal.

The tools invite you to explore the interplay between local aspirations and global responsibilities in your place – both socially and ecologically – and create a holistic Doughnut ‘portrait’ of your place.

The report paints a sobering picture of how much action and change is needed, but Leeds is by no means the exception. Indeed it is a common pattern, emerging around the world, that all places need to radically transform if humanity is to avoid pushing the planet even further out of balance.

Climate scientists are running out of adjectives to express just how urgent this need for change is; as Paul Chatterton of Climate Action Leeds reminds us, ’If we want to change the city in 10 years, we can’t be having this conversation again in 2030’.

A toolkit for the future

Leeds started its journey with data, Melbourne started last year with community conversation and Immy and the team at Civic Square in Birmingham started with reconnection to place.

There are so many ways to start and so many ways to build an ever-richer portrait of your place – drawing on lived experience, ideas, aspirations, inspirations, histories and stories to inform and identify possible pathways forward.

Where 20th-century economic thinking might fail to handle complexity, what we’re learning is that if you put the right tools, data and ideas in front of the creative, imaginative and diverse people of your place, nothing is too much to handle.

So we invite you to join the global community of places using these tools and exploring these questions at Doughnut Economics Action Lab, and let’s see what safe and thriving futures we can create together.

Click here to discover how your community can use the Doughnut Economics Action Lab tools.