TV presenter James May is set to go vegan for 24 hours today.

‘You may be surprised’

The campaign is calling for people to post a short video explaining why they are going vegan; the aim is to highlight the environmental impact of livestock farming.

Optimistic about his ability to avoid meat for 24 hours, May is now challenging others to do the same.

In a video recorded for the platform Food Tribe, May said: ‘I’m doing World Vegan Day and I’m not eating any meat produce for a whole day.’ He added: ‘If you’re into that sort of thing give it a go. You may be surprised.’

The video sees May make vegan hot dogs and give them to his electricians; they didn’t realise they were meat-free after tasting them.

May said: ’We did that as part of World Vegan Day as an experiment. Things like vegan sausages, vegan bacon, vegan black pudding – I didn’t know you can get that but you can. They’re all there to help people make the transition from eating meat to not eating meat if that’s what you want to do.’

Fearne Cotton said: ‘For many people who find giving up animal-based products difficult, #GoVegan24 gives them the perfect way of exploring the benefits of veganism.’

Campaigners say going vegan is the single best thing you can do to reduce your impact on the environment, with livestock producing one fifth of all greenhouse gases.

‘The planet and our wildlife is under huge threat from livestock farming and fishing. The natural world is disappearing in front of us.

‘Going vegan can stop this.

‘We’re calling on people who might feel going vegan is a step too far to try it for just 24 hours. #GoVegan24 is the perfect way to explore a vegan diet. I’m sure those that do will be pleasantly surprised!’

The global meat and dairy trade is one of the foremost drivers in habitat destruction across the globe, with some of our most precious natural habitats being bulldozed to make way for beef cattle.

Founded in 1994 and based in Bristol, Viva! campaigns for a vegan world ‘because taking life unnecessarily is obscene, damaging and plain wrong.’ 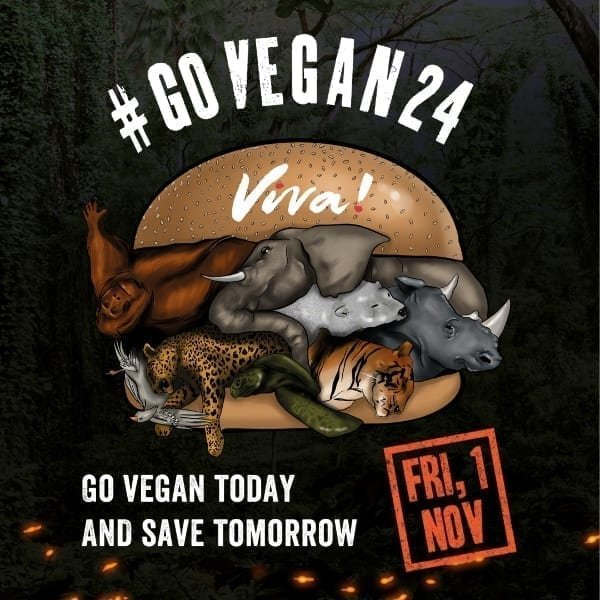 Why to try vegan

Three-quarters of the world’s food comes from just 12 plants and five animal species. Massive livestock populations have profound consequences for biodiversity because of deforestation, change of land use, overgrazing and the degradation of grasslands and desertification.

Human activity is pushing life toward a sixth mass extinction and natural ecosystems are degrading at an unprecedented rate.

Livestock produce one fifth of all greenhouse gases – significantly more than the world’s transport.

70% of all cleared rainforest land is used for grazing – the remaining 30% for soya fodder (fed to farmed animals for meat and dairy).

Vegan diets are potentially transformative – needing 76% less land for food and producing 50% less global warming gases from food, with up to three-quarters less in the USA.

Click here to read our article about the GoVegan24 campaign.

The future of wheat