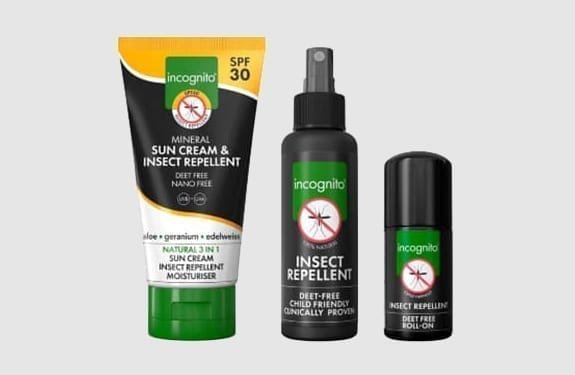 Travel to tropical destinations is on the rise, and with it the risk of catching mosquito-borne disease such as such as chikungunya, dengue, malaria, yellow fever and Zika.

The effects of climate change are also increasing the number of regions hospitable to mosquitoes and the diseases they spread; Aedes aegypti, the mosquito that can spread chikungunya, dengue fever, Mayaro, yellow fever and Zika (among others), already lives alongside half of the world’s population and spreads diseases that kill millions of people every year.

Mosquitoes are also starting to become resistant to established chemical repellents. In February this year, the World Health Organisation called for ‘urgent action’ to prevent the development of further resistance to the four commonly used insecticide classes: pyrethroids, organochlorines, carbamates and organophosphates.

Fortunately, as concern grows around products that contain DEET and chemicals that may cause health issues, there has been a rise in consumer demand for natural insect repellents. While some synthetic insect repellents can kill aquatic wildlife and damage mammalian brain cells, insect-repelling essential oils have low toxicity and do not harm the environment – they’re also safe to use on younger children.

Java citronella – which is at least twice as effective as the common variety – is one of the key ingredients in the incognito range of natural insect repellents which, when used correctly, is effective against many of the 3,500 different species of mosquito. Unfortunately, it has historically been difficult to get full protection from biting insects in hot countries that also demand protection from the sun.

While many of us are familiar with the night-time biting associated with malaria, viruses such as dengue and Zika are transmitted by mosquitoes that bite in daylight hours when the sun’s beating down.

This is a problem: applying insect repellent on top of sunscreen can significantly lower your SPF protection – and reversing the order leaves you no better off. In fact, applying sunscreen over the repellent will reduce the efficacy of both.

To get full protection you need to use a combined sunscreen insect repellent that has been specially formulated to deliver protection from both the sun and insects.

Incognito’s award-winning SPF30 combined mineral sunscreen and insect repellent is a groundbreaking natural product that can be used safely on children as young as two.

The Sun Cream & Insect Repellent SPF30 is a revolutionary tri-action sunscreen, moisturiser and insect repellent. Providing unprecedented broad spectrum SPF30 protection against both UVA and UVB rays, this non-greasy lotion will protect your skin against sun damage and ageing while also providing camouflage from biting insects.

It has been clinically tested to provide high protection for up to seven hours, with four hours of full protection against mosquitoes carrying dengue, malaria or Zika. Like the incognito spray, the Sun Cream & Insect Repellent SPF30 is available in various sizes so you can top up your protection when you’re out and about enjoying the sun.

Incognito is an ethical company that takes an extremely conscious approach to its products and the impact they have on the planet. It has won a Queen’s Award for Sustainable Development for its efforts to ensure ‘a better quality of life for everyone, now and for generations to come.’

In addition to the active ingredient PMD, which has been approved by the NHS and Public Health England, incognito’s repellents are packed full of natural and organic ingredients, and certified Cosmos Natural by the Soil Association.

The company’s ethics extend into its packaging; the plastic used in the new green tubes and bottles is made entirely from renewable sugar cane oil, which reduces greenhouse emissions by capturing carbon.

For every 1,000kg of green plastic produced, 2,500kg of CO2 is captured, while the production of 1,000kg of conventional plastic, which is made from raw Earth oils, releases 2,100kg of CO2 emissions.

Incognito also donates 10% of all profits to charitable causes. Now there’s really no need for insects – or ethical dilemmas – to get in the way of a good holiday, at home or abroad.

Click here to view the incognito range and see tips on how to avoid biting insects.