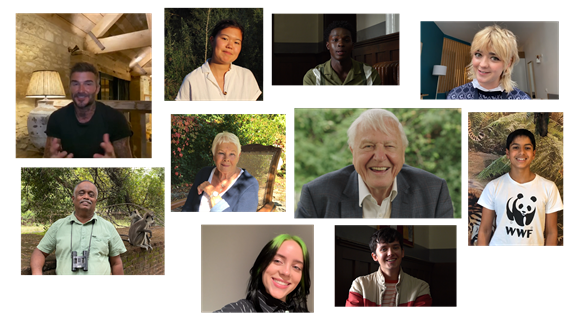 Sir David Attenborough takes questions from David Beckham, Billie Eilish and more to mark the release of ‘A Life on Our Planet’

To mark the release of David Attenborough: A Life on Our Planet, Netflix and WWF have collaborated with people from the worlds of sport, film, TV, music and natural history and asked them to put one question to Sir David about nature, climate change and his incredible career as a naturalist.

The video includes notable names such as David Beckham, Billie Eilish, Maisie Williams, Judi Dench and the Sex Education cast, as well as young voices for the environment and people from around the world who have worked with Sir David over his long career in broadcasting.

A message of hope

Produced by award-winning wildlife filmmakers Silverback Films and global environmental organisation WWF, A Life on Our Planet is a unique feature documentary that tells the story of life on our planet by the man who has seen more of the natural world than any other.

In more than 90 years, Attenborough has visited every continent on the globe, exploring the wild places of our planet and documenting the living world in all its variety and wonder.

Addressing the biggest challenges facing life on our planet, the film offers a powerful message of hope for future generations.

The film, which serves as Attenborough’s witness statement for the natural world, launched globally on Netflix October 04, 2020.