I’m being pushed in a wheelchair through a tunnel under Tottenham Court Road, singing ‘It’s a nice day to have a fever’ to the tune of It’s A Long Way To Tipperary. It was the only way I could cope with the intense pain of the fever!’ Howard Carter had a temperature of 104.1°F and was on his way back to the Hospital for Tropical Diseases.

11 months earlier Howard had visited Cochin in India – a low-risk area at a low-risk time of year. He’d used a Deet-based repellent that had been recommended by a UK pharmacist, but had still been bitten by mosquitoes. ‘The Deet obviously didn’t work!’, he explains. ‘Probably because the mosquitoes were resistant to it!’ Howard was also on anti-malarial drugs, yet sure enough he contracted malaria. ‘Like the mosquitoes, the malaria parasite must have developed a resistance’, he said.

Not to be deterred from travelling, Howard celebrated his recovery with an 11-day trip to Thailand – only to wind up singing at the top of his voice en route to London’s Hospital for Tropical Diseases. ‘I knew I was in trouble when they escorted this gaunt, under-nourished patient – still attached to a drip – out of a quarantined room and wheeled me inside. It was the same room Cheryl Cole ended up in 12 years later.’

Howard was diagnosed with dengue fever, which is transmitted through Aedes mosquitoes. There is no cure for dengue; like so many other mosquito-borne diseases the best cure is prevention, so Howard was inspired to develop a repellent that offered real protection without harming the environment. ‘I’m not sure how many people would think of developing a repellent when potentially on their deathbed’, Howard muses, ‘but many wonderful inventions are born from people’s misfortunes.’ 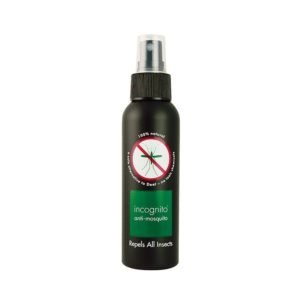 The active ingredient in incognito® spray and roll-ons is clinically proven to protect against malaria and, to address the safety concerns associated with conventional repellents, it’s also 100% natural. Following the spray’s success and with the help of the late Dr Nigel Hill (previously head of the Disease Control and Vector Biology Unit at the London School of Hygiene & Tropical Medicine), Howard also concocted a range of repellent washing accessories: a hair and body wash, a citronella loofah and a luxury soap.

‘What you wash in affects your attractiveness to mosquitoes and other insects’, Howard explains. Bacteria on the skin feed off the detritus around the pores and excrete a kairomone, a strong attractant to female mosquitoes. The loofah soap has microscopic hairs that gently remove the detritus, while at the same time cleaning and conditioning the body.

Another award-winning product Howard has invented is an Aloe vera-based moisturiser, which contains organic Java citronella oil from Indonesia. Java citronella is at least twice as strong as the common variety because insects have not built up a tolerance or resistance to it. The full range consists of 10 lines, which are all packaged using recycled materials.

These UK-manufactured products have many followers, from doctors to A-listers, and have been recommended by various editors and travel health professionals. At PQ HQ we never travel far without a bottle in the bag. While UK sales are still going strong, incognito® is also an export case study for UK Trade & Industry (UKTI); the company is growing fast and has doubled its staff and office space this year.

Howard and his wife built incognito® from scratch; after declining what Howard calls ‘the Dragons’ derisory offers’ on a 2009 episode of BBC2’s Dragons’ Den, they invested their pensions through Alternative Business Funding. The company donates 10% of all profits to charity and funds a number of projects around the world, from educational programs in Africa to orphanages in Kerala and Tamil Nadu in Southern India.

Currently mosquitoes and other insects are at record levels all over the world; the same is true in the UK, where last year’s mild winter didn’t kill off as many insects as usual. ‘It’s another knock-on effect of global warming’, Howard explains. ‘Mosquitoes have become more prevalent and have started carrying diseases into areas previously thought safe. There have been West Nile fever and malaria outbreaks in Greece and the US, and chikungunya and malaria outbreaks in mainland Europe.’ But the main problem is now dengue fever; over half the world’s populations is now at risk from this potentially deadly virus – fast overtaking malaria in the number of worldwide cases, if not deaths. In the first half of 2013 1.6 million individuals contracted dengue during a hyper-epidemic in Brazil.

‘Insect populations are growing at an alarming rate all over the world. According to disease ecologist Professor Steve Lindsay, there is now a 42% chance that malaria and mosquitoes will return to the UK today!’, says Howard. ‘In the next few years the risk will be well over 50%, according to a lecture given at the London School of Hygiene & Tropical Medicine a few years ago.’

As Howard and Cheryl Cole discovered, no anti-malarial drug is 100% effective, either – Howard estimates around one in 10 people in the UK contract malaria while taking prophylactic medication. ‘I don’t advocate dispensing with anti-malarials just because I no longer take them’, he says. ‘It’s up to the individual.’ However, incognito®’s new active ingredient, when used in conjunction with an impregnated mosquito net, is proven to protect against malaria. The clinical research was carried out on 4,008 people in the Bolivian Amazon by the LSHTM, funded by the Gates Malarial Foundation and published in the British Medical Journal in 2007.

Thanks to Prince Charles taking an early interest, incognito’s insect repellent range is available in Waitrose – and is now the only one it sells. The same goes for Holland & Barrett, too. You can also buy them from most decent health shops and chemists and outlets all over the world; incognito® exports to 20 countries from Eastern Europe and Africa to Hong Kong and Japan.