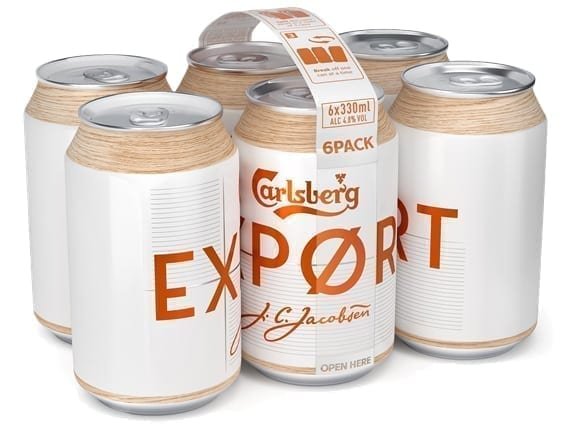 Today, Carlsberg has launched the ‘Snap Pack’ – an alternative to the plastic rings round drinks cans

From today, six-packs packs of Carlsberg beer sold in Tesco will be held together in ‘Snap Packs’ instead of the plastic rings that are a peril to wildlife.

Marine life, birds and cats can all fall victim to plastic rings when they mistake them for food or get them stuck round their necks.

The Snap Pack, initially launching in the UK on 6 x 330ml Carlsberg Expørt cans, will be available in over 500 Tesco stores nationwide from today (10 September).

A sustainable packaging solution, the new Snap Pack holds multipacks of Carlsberg Expørt cans together using small dots of a specially developed glue. The cans are easily snapped apart when required, but the glue is robust enough to withstand handling to and from the shop.

Using minimal plastic and limiting waste, as well as reducing CO2 emissions and the reliance on fossil fuels, the aim of the Snap Pack is to reduce the Carlsberg Group’s global plastic usage by more than 1,200 tonnes – from brewery to store – annually, once rolled out onto all four-, six- and eight-packs across all Carlsberg variants globally.

The Snap Pack has been developed as one of the plastic-reducing initiatives in Carlsberg’s sustainability programme, Together Towards Zero. Launched last year, the strategy focuses on four key ambitions: zero carbon emissions, zero water waste, zero irresponsible drinking and a zero accident culture across all breweries by 2030.

Alistair Gaunt, vice president of the national sales business unit, Carlsberg UK, said the new Snap Pack is a ‘revolutionary new way of responsibly packaging Carlsberg Expørt’. He added, ‘we know that sustainability is as much a priority for retailers as it is for us, and of course shoppers.’

The Snap Packs will be sold exclusively in Tesco until March 2019. It will then be rolled out to other Carlsberg variants in the UK over the following six months. Snap Packs will also be available in other selected European markets from late September onwards, and in Carlsberg’s home Denmark from early 2019.

Click here to find out how Iceland’s making ale from leftover bread.