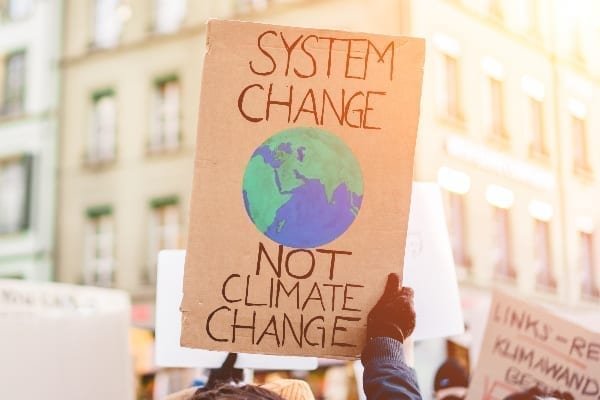 The consumer revolution is merely a part of a systemic revolution we are all about to be swept up in. It’s already begun – just like climate change.

The consumer revolution is merely a part of a systemic revolution we are all about to be swept up in. It’s already begun – just like climate change.

Conscious consumption is morally and ethically impossible to achieve unless there is an associated change in the cultural systems propping up our unsustainable lifestyles. That’s because our consumerist culture is far from conscious; it’s geared towards profit, shareholder dividends and the desecration of Mother Earth.

Currently, the systems running and regulating our consumerist existence are pinned to a framework of laws, based on immorally acquired land and wealth, that in many instances date back to the Normans.

Much of our education system is caught up in a dogma laid down over 150 years ago. Economic theory was pinned to Newton’s law that every action has an equal and opposite reaction, yet Newton was only ever talking about gravity – not supply chains, customer demand or costings.

It’s as absurd as running an industry on electricity from steam power, which we still do (even if it’s nuclear).

Similarly, there have been no real innovations in transport from cars, trains or planes since they were invented. We have known for a long time that our culture is unsustainable; by definition it can’t continue ad infinitum. We need to step into the future, and that begins with us as individuals.

The consumer revolution will replace the ‘I’ with a ‘we’, and this will facilitate a psychological revolution. We will stop being selfish and instead take pleasure in doing things for the better of all – cooperatively.

This will accelerate an environmental revolution: we will stop accepting or allowing the pain or death of fellow humans, animals, plants or the planet, and will – and must – take on a biosphere mentality.

Another element of this consumer revolution is a sharing economy. We don’t need a hoover in every home if we can share a far better one, and the same goes for cars, washing machines, freezers, lawnmowers – even DIY tools.

For new housing developments based on minimising carbon footprints, it makes perfect sense to have communal items. It’s the sort of common-sense idea you’d expect to see in a Scandinavian housing development, made from hempcrete, that produces all its own energy and food.

Millennials already have this sharing instinct – they already share everything online. The only real fear of switching to a sustainable future is around sacrificing what we have already got.

But what have we actually got? We’re no happier, healthier, wealthier or more fulfilled than we were in the pre-internet era. We might have more stuff than we had in 1998, but it isn’t the stuff we really need.

I don’t remember ever being given the choice between cheap food and healthy food, yet all those over-consumed, processed carbohydrates have caused a lot of long-term, really expensive health consequences, including obesity, diabetes, depression, cancer and heart disease.

Do we really need cheap plastic crap made in China that lasts a week, or would it be better to pay more for longer lasting, repairable products that are manufactured locally? Must we have cheap clothing, with an interconnected web of pestilence, desecration and slavery, or sustainable, locally produced, longer wearing items?

So too will the health, transport, education, religious, legal and political systems. They won’t just change with the new times; each system needs a new start, which is why the consumer revolution will also lead to a cultural revolution.

In the time when the rich did as they pleased with extravagance, and corruption and nepotism were rife, senseless wars were constant and communities were split apart. Many of the workers were unable to feed their families and revolution was inevitable.

Click here to find out more about the Culinary Caveman’s latest book, The Seven Deadly Whites.