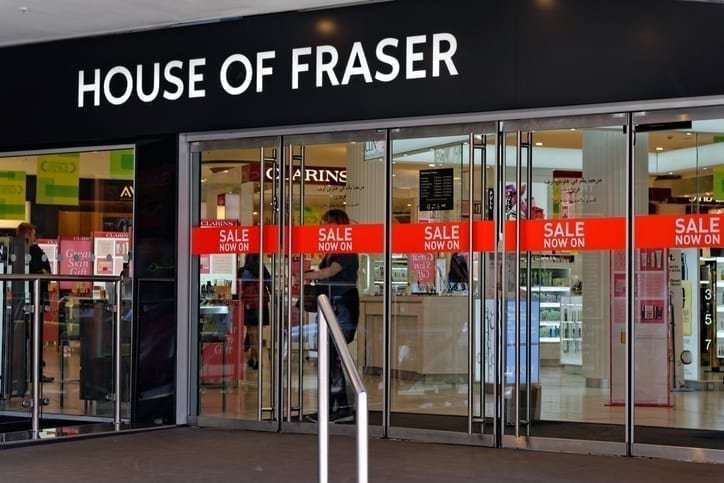 They called for the House of Fraser to stop selling fur-trimmed garments from factory-farmed raccoon dogs, rabbits and foxes or from coyotes caught in cruel leg-hold traps.

Fur free for a decade

In November this year House of Fraser chose to start selling fur again after being fur-free for a decade. The decision has been met with widespread consumer condemnation and disgust, with many customers taking to Twitter to pledge a boycott of the company.

Although the offending fur items were initially removed online and in store, they subsequently crept back in at selected stores and online.

House of Fraser has now publicised a new and much-ridiculed policy claiming it only stocks fur from so-called ‘responsible’ sources.

That, say campaigners, is an oxymoron; all fur comes from animals who have spent their entire lives in small, barren, wire-floored cages, denied adequate space or environmental enrichment to live a meaningful life before being electrocuted or gassed. Alternatively it comes from animals like coyotes wild-caught in cruel leg-hold traps.

Both fur farming and leg-hold trapping are banned in the United Kingdom on animal welfare grounds.

During the meeting, the executive director of Humane Society International/UK urged shareholders to rethink the company’s u-turn on being a compassionate retailer.

‘Our customers do not want it’

As recently as 2018 House of Fraser’s head of sustainability gave evidence to a House of Commons Select Committee Inquiry confirming that its customers are very firmly against fur and don’t want it to be sold by the store.

When questioned by MPs, Dorothy Maxwell confirmed HoF customers don’t want to buy fur, saying: ‘We know from asking our customers that they are not interested in buying real fur. Having been a fur-free retailer for many years, it is also because we know our customers do not want it… Our understanding of the market is that, when we look at our customers, roughly eight out of 10 tell us they want products that are not only free of fur but that meet other good performance standards on sustainability. That is the information that we have… We have genuinely been a fur-free retailer for many, many years and we do not want to have real fur in our stores.’

House of Fraser was dubbed House of Horrors by campaigners for selling jackets made by Canada Goose, Parajumpers, Pyrenex and Mackage using real fur.

The move sees House of Fraser strangely out of step not just with its customers’ sentiments but also with the increasing number of fashion designers and retailers who are dropping fur cruelty.

The decision appears to have been introduced sometime after the company was bought out by Sports Direct owner Mike Ashley.

‘House of Fraser customers have made it clear they don’t want anything to do with the cruel fur trade, so it’s shocking that the retailer has ditched its long-standing fur-free policy, a move that’s out of touch with public and fashion industry opinion.

‘Its recent takeover by Sports Direct’s CEO Mike Ashley appears to have resulted in the retailer abandoning its morals and instead buying into the fur industry’s fantasy world of ‘responsibly sourced fur’.

‘The truth is there is no such thing; all fur is cruel, there is nothing responsible about foxes going mad in tiny wire battery cages, raccoon dogs being anally electrocuted, or coyotes being shot in leg-hold traps. We are urging House of Fraser shareholders to do the right thing for animals, and animal-loving customers, by reinstating its fur-free policy.’

These UK fur imports are a double standard that the #FurFreeBritain campaigners are urging the government to end, by implementing a UK fur sales ban.

Where UK gets its fur

The UK banned fur farming almost two decades ago (in 2000) on ethical grounds, but since then has allowed imports of more than £820m worth of fur from overseas.

Since the ban the UK has imported more than £14m worth of fur from Finland, and HM Revenue and Customs figures also show sizeable imports from a range of other countries such as Italy, France, Poland, China and Russia.

Finland is by far the biggest ‘producer’ of fox and raccoon dog fur in Europe, rearing and electrocuting around 2.5 million foxes every year for the global fur trade; only China farms more foxes globally.

Since the United Kingdom banned fur farming on ethical grounds in 2000, more than a dozen countries in Europe, including Austria, the Czech Republic, the Netherlands and Norway, have legislated against the practice.

In June this year the government in Ireland agreed to phase out fur farming and the Slovak National Council approved a ban on fur farming in October. Legislation to end the practice was presented to the Bulgarian parliament earlier this autumn.

Click here to read our article about the celebs backing a fur-free Britain.