Ideas fresh from the field

Home » Ideas fresh from the field

Our bathroom was always stocked with Weleda’s products when I was growing up, and I’ve seen the company’s various concoctions on the shelf in Boots. I’m always a bit suspicious of big ‘natural’ brands that have managed to crack the high street market, so the opportunity to visit Weleda’s biodynamic garden at its UK HQ was too good to miss. I wanted to find out more about the company and see how it’s managing to succeed in such a competitive market.

After crossing the doorstep of a big pink building in Ilkeston, Derbyshire, I got my first clue: all the fragrances of a fresh summer meadow – concentrated and combined – flew up my nostrils at once. The second clue came from the no-nonsense comment from Jayn Sterland, Weleda’s MD: ‘The products just work.’ She’d invited me to come and see for myself; if that hadn’t been clue number one, it was certainly clue number three.

Like the rest of the people I met at Weleda, Jayn has the quiet confidence of anyone that truly believes in what they’re doing – and Weleda has been doing its thing for a long time now. Its first products were being bottled before my mum was in nappies and the cult Skin Food cream was a central feature of our grandmothers’ dressing tables before it was discovered by the likes of Adele and Victoria Beckham.

Over the next few hours, I started to realise that Weleda is a very special brand. It was founded in Switzerland in 1921, under the combined influences of Dr Ita Wegman and Austrian scientist-philosopher Dr Rudolf Steiner, the father of Steiner Schools and a branch of philosophy called ‘Anthroposophy’. Together this unusual philosopher-doctor team explored how, with a bit of stimulation, the human body is actually remarkably adept at healing itself. Weleda’s holistically-formulated pharmaceutical products are based on the understanding that medicine provides the crucial stimulus to kickstart the body’s own healing powers. ‘Weleda’ is the name of the Celtic goddess of wisdom and healing, and the Druid word can be translated as ‘priestess’, ‘medicine woman’, ‘healing woman’ or ‘shaman’.

The company believes that the use of ingredients the body recognises and is able to process, in their most natural and potent form, allows health to flourish.

Steiner was the inspiration behind organic farming as we know it; he presented biodynamic agriculture as a solution to farmers’ concerns about the health of their animals and crops. Today, Weleda sources ingredients for its natural and organic cosmetics and pharmaceuticals from its biodynamic farms in France, the UK, Switzerland and Gemany, where it manages the largest biodynamic medicinal plant garden in Europe.

All Weleda’s biodynamic gardens operate in a similar way, but the 13-acre site at Ikeston benefits from the additional touch of Claire Hattersley, Weleda UK’s head gardener. Claire would be an inspiration to anyone: while extremely practical and down to earth, she also believes in the oneness of everything, and that the health of the soil must be seen in the context of the wider whole. No element could be truly ‘healthy’ unless all other aspects of the biodynamic gardens are balanced and in harmony.

Most of the plants grown at Ilkeston are for medicinal purposes; the broad beans, garlic, onions and tomatoes all have a role to play, but Weleda grows more calendula than anything else. This flower is a fantastic natural antibacterial that was nicknamed ‘Russian penicillin’ during World War I. Weleda uses it in everything from babycare products to toothpaste, and its new herbal medicine, Calendula Cuts & Grazes Skin Salve, is manufactured in the UK using Ilkeston-produced calendula tincture.

Several aspects of Weleda’s approach ensure that the plants grown in its garden are as potent as possible. Many plants are given the space and the freedom to grow where they choose; wild blackthorn, hawthorn and nettles are left untouched, and we spotted wild orchids sprouting from a meadow full of cowslip. Aconite was also flourishing in the shaded soils of ‘Nooky Hollow’. The plants know where they want to be and are given the freedom to populate areas of their choosing; the result is a more potent plant in the wild and a more effective product in the bottle.

While tractors and other machinery have their place in the garden and are used when needed, as much as possible is done by hand. The gardeners do everything from sowing the seeds to harvesting the crops; they’re also responsible for tincture making, the first stage of manufacture for the products that end up on the shelf. 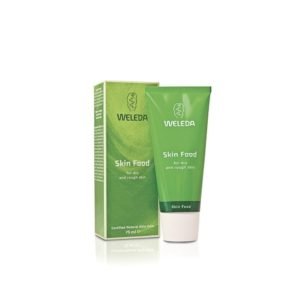 Despite having its roots in the past, today Weleda is developing medicines that are geared towards modern lifestyles. Its Hayfever Relief Spray packs eyebright, red onion and yellow jasmine into an ultra-portable spray that you can zip into your pocket or handbag, and the Muscular Pain Relief Spray is ideal for anyone who has overdone it at the gym. It combines arnica – famed for its anti-inflammatory properties – with the less commonly known Ruta graveolens (common rue) and Rhus toxicodendron in an oral spray.

The efficacy of the techniques used at Weleda is underwritten by the health of the beehives in its garden; they’re managed by ‘Mick the Bee’, who loves having his bees on Weleda’s site. During a recent wet summer, a hive that would normally produce 30lb of honey dropped to around 7lb, but the hives in Weleda’s garden continued to produce an average yield of 30lb. For Weleda the bees provide a vital pollinating service, while for Mick the variety and health of Weleda’s plants are in turn ensuring healthy hives – and a healthy bank balance. I asked for Claire’s views on how bees would be able to survive in the future as we pursue a system of monocrop farming. She’s cheerful, optimistic and down to earth, and so was her response. ‘It’ll be the crops that become vulnerable as there’s no other pollinator’, she smiled. ‘It’ll be the end of that system of agriculture, not of the bees!’

A lot of love, time, care and energy goes into this garden – a day is dedicated to each batch of compost alone – to ensure that the plants grow as they wish, are nurtured into bloom and harvested at their most potent.

Several hundred healing plants are grown in Weleda’s gardens, which are distilled, extracted and potentised to create the finished product – whether it’s a tablet, ointment, pillule, cream, lotion or syrup – at its own tincture production facility. Artificial ingredients are never used; all Weleda’s products are made from pure, natural ingredients that burst with the healing and caring powers of nature. Weleda is unique in that the company grows many ingredients in its own herb gardens, or through fair trade farming partnerships around the world. Ingredients aren’t bought on the open market because traceability is crucial for every ingredient and every product. As a result of its ethics and high standards, Weleda is the only European beauty brand that is a member of the UEBT (Union for Ethical BioTrade), which sets inspirationally high standards for sustainability.

The result? Two packets of Weleda’s cult Skin Food – the fan club for which includes Adele, Joss Stone, Rihanna, Victoria Beckham, Julia Roberts, Helena Christensen, Erin O’Connor and Alexa Chung – are sold every minute, thanks to its ability to soothe and smooth dry or stressed skin. While celebrity beauty secrets aren’t always easy to get hold of, in this case the secret’s out: Skin Food is so effective because it uses really simple ingredients (such as organic chamomile, wild pansy and rosemary) that aren’t over-processed: its power lies in the way the ingredients are grown, nurtured and harvested, and the fact that each of these stages is given the respect it requires.

The time has come to realise that supersensible knowledge has now to arise from the materialistic grave.’
Dr Rudolf Steiner 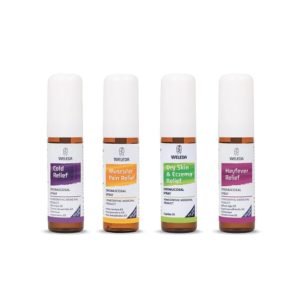 Weleda works with 1,000 natural substances in natural and organic cosmetics and pharmaceuticals, and manufactures over 2,500 pharmaceutical products, 120 natural cosmetics and 10 dietary products worldwide. The ingredients are grown with honesty and integrity, and the products have stood the test of time because, quite simply, they work. But to get the products to market, Weleda’s gardeners have to lead what Claire calls a ‘schizophrenic existence’; they scrub up and exchange muddy wellies for gowns in order to comply with the strict standards of hygiene that govern the manufacture of all licensed pharmaceuticals. Weleda’s medicinal ingredients have been granted Traditional Herbal Registration certification by the MHRA, the same body that licenses all mainstream pharmaceuticals. In addition, the gardens at Ilkeston have been certified by Demeter, the trademark for biodynamic production, and its bodycare products have met NATRUE’s high standards of authentic naturalness, which assess natural and organic ingredients as well as manufacturing processes. All the products are subjected to the pharmaceutical scientific rigour instilled by both Dr Rudolf Steiner and Dr Ita Wegman back in the ‘20s.

It’s a fine line to tread; the budgets involved in getting a product onto high street shelves are enough to wipe out many independent companies, but without mainstream presence it’s hard for any company to survive. On top of that there’s the challenge of competing with the flood of ‘natural’ brands and products that have appeared over the last few years, which are in fact anything but. There are no legal standards to determine what constitutes an ‘organic’ beauty product, so manufacturers and retailers can (and do) apply the term to products containing non-organic ingredients. Chemicals such as methylisothiazolinone (MI) and phenoxyethanol have been found in ‘natural’ beauty products, and consumers trying to make the shift to a healthier and more sustainable lifestyle risk being misled by brands trying to cash in what they see as a trend to be exploited. In contrast, if sustainable development is en vogue, for Weleda it is no passing trend – it has been a 90-year commitment that’s still going strong.

Since the company was founded, Weleda has understood humans as beings of body, soul and spirit, and has developed a truly holistic approach to healthcare. It balances science with philosophy and has the integrity and the confidence to do things differently – because doing so produces products that really do work.

For more information on Weleda, its products, the history of the company and the ethos behind the brand, visit www.weleda.co.uk.