Keepers of the Wild 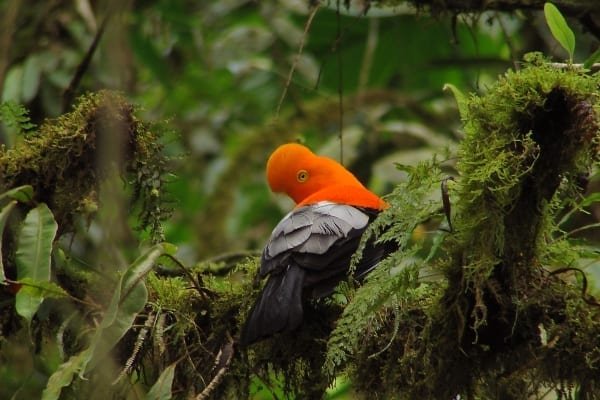 This article first appeared in our Health Revolution issue of My Green Pod Magazine, distributed with The Guardian on 24 July 2020. Click here to subscribe to our digital edition and get each issue delivered straight to your inbox

To the east of the Ecuadorian town of Baños, overshadowed by the mighty Tungurahua – the ‘Throat of Fire’ volcano – a series of reserves has been purchased and protected by a team led by a remarkable man: Lou Jost.

For 20 years Lou has followed a vision to create a biological corridor, roughly 18km as the condor flies, between two of Ecuador’s national parks: Los Llanganates and Sangay.

Lou, a scientist and conservationist, co-founded Fundación EcoMinga in 2005; over the years World Land Trust and its supporters have helped fund the purchase of more than 17,000 acres of forest to protect the habitat between the two parks.

The goal is for animals like the rare mountain tapir, spectacled bear, puma and Andean cock-of-the-rock (main image) to continue to be able to pass safely between the northern and southern ranges of the eastern Andes.

Keepers of the Wild, the unsung heroes of the reserves, work tirelessly; they’re on constant call to tackle emergencies – from illegal poaching to forest fires and landslides.

The qualities needed to be a reserve ranger working in rural Ecuador are many. It takes more than stamina and endurance to succeed in these remote areas, and to work alongside local people whose traditions may not always be sympathetic to wildlife.

Jesus Recalde was the senior reserve guard with Fundación EcoMinga for 12 years, and his gentle wisdom helped to guide the organisation’s evolution. But he felt the time had come to step down and asked if his son, Darwin, could take his place.

‘Jesus first came to my attention through signs I’d sometimes see – deep in the forests – while on my botanical explorations’, Lou explains. ‘One read ‘No cazar los aves’ (‘Don’t hunt the birds’) – an unusual sentiment at a time when every kid in rural areas carried a slingshot to kill birds. Years later I learned Jesus was the author of these signs, and realised that this was an unusual man.’

WHAT YOU CAN DO

£100 will purchase and protect one acre and will save forests and expand EcoMinga’s Manduriacu Reserve. Click here for more.

Keepers of the Wild

From hunter to hero

The first Keeper of the Wild Lou hired was Abdon Recalde, who was Jesus’s brother. He too was an exceptionally sensitive and honest man.

Jesus introduced Lou to other members of his family, some of whom joined the team. The extended family’s personal qualities — curiosity, intelligence and integrity — were key to the foundation’s success. ‘Today, our ‘Team Recalde’ is famous among Ecuadorian biologists’, Lou says. ‘It’s often asked to help in field research.’

‘One day I shot a female monkey when she was with her baby. When I went to see her as she was hurt on the ground, she was moaning, whining and crying just like a person. It was very sad. That is when I stopped hunting. From then onwards my life changed. I began to think differently.’

JESUS RECALDE
Keeper of the Wild with Fundación EcoMinga, Ecuador

Unbelievably, Jesus and his brothers had been voracious hunters when they were younger – until the day Jesus shot a mother monkey with a baby. Jesus was shaken to his core and never killed anything again.

‘Darwin had occasionally filled in for Jesus for jobs that were physically demanding, and we were of course delighted that Darwin would be Jesus’s replacement’, Lou says. ‘Darwin is a local hero of ours; along with other members of the community, he risked his life to pull people out of the mud when a landslide swept a bus off the road. These people are willing to risk their lives to help others – and to protect the reserves.’