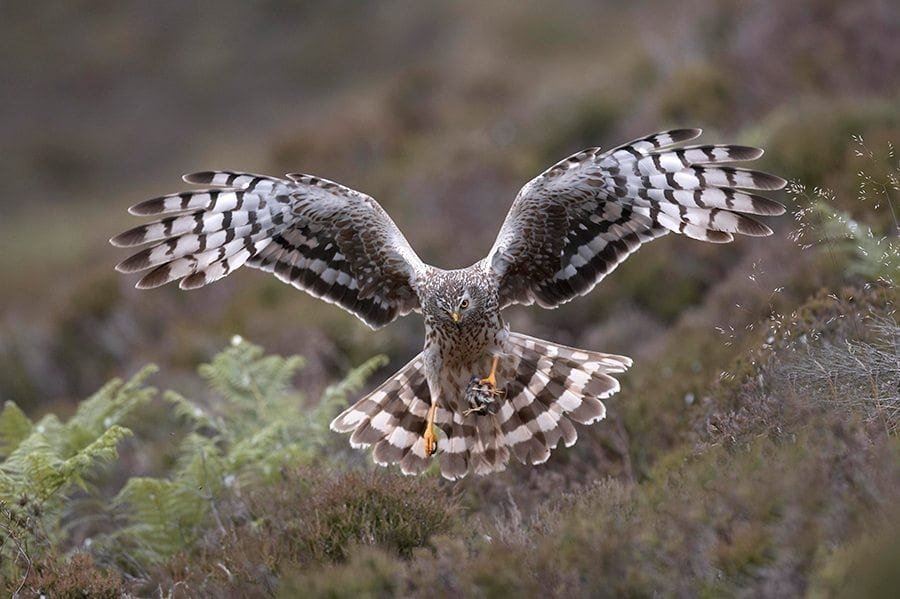 Lush cosmetics has released a new bath bomb, Skydancer – Far From The Madding Guns, to help raise funds for one of England’s rarest bird of prey, the hen harrier.

Profits from each and every one will help fund equipment for the RSPB’s Hen Harrier LIFE+ project, which will satellite tag endangered hen harrier chicks born in the coming years.

This strategy allows the RSPB to monitor these birds after they’ve left the nest; the RSPB and Natural England have been satellite tracking hen harrier chicks to learn more about their ecology and to find out where they might be at risk.

‘We are delighted that Lush has come up with this imaginative way of raising awareness about hen harriers and getting their customers involved in their conservation. Everyone who buys a bath bomb will be making a valuable contribution towards bringing this amazing bird of prey back from the brink of extinction in England.’

A government-commissioned report states that there should be over 300 pairs of hen harriers breeding on the uplands of northern England – but in 2013 there were no successful nests.

The situation has barely improved, with just four successful pairs in 2014 and six pairs in 2015 – a statistic that worries conservation organisations greatly. According to the report, the main cause of the decline is illegal persecution associated with driven grouse moors.

Lush first got involved with the campaign to protect hen harriers in August 2014 after linking up with the organisers of Hen Harrier Day. The event was set up by Chris Packham, Mark Avery and Birders Against Wildlife Crime to highlight the near extinction of one of England’s rarest and most beautiful birds of prey.

The campaign that followed saw Lush customers sign a politely worded plea to Her Majesty the Queen, asking for her help and support in the protection of hen harriers. By the end of last year, 20,000 postcards had been signed by Lush customers and delivered to Buckingham Palace.

Anti-RSPB group You Forgot The Birds recently issued a statement blaming the RSPB for the over-monitoring – and consequent failure – of five hen harrier nests this summer.

However, Natural England confirmed the failure was actually caused by males hunting a long way from the nest, forcing the females to leave the eggs unincubated while they went and found food for themselves.

Click here to find out more about Skydancer – Far From The Madding Guns from Lush.