Your beauty routine might be packed with natural ingredients – but how were they sourced, and are they affecting biodiversity?

The scientific community is convinced that human influences are causing species to become extinct at up to 1,000 times the rate that natural conditions would cause.

Many of the manmade causes of biodiversity loss are widely known: the degradation and destruction of habitats and ecosystems, climate change, emissions, pollution and invasive alien species – but what role do your cosmetics play?

Acai, roses, eucalyptus, lavender, patchouli, citronella, vetivert, shea nuts, neem, rosemary, avocado – the wonders of Nature’s medicine cabinet smell incredible and can do wonders for your skin and health. But the way these organic raw materials – and many more – are sourced can have devastating impacts on entire ecosystems, communities and even the efficacy of the final product.

A 2017 Euromonitor International Global Consumer Trends Survey revealed 65% of global consumers try to have a positive impact on the environment through their everyday actions. Buying natural is just one of the ways increasingly conscious shoppers feel they can make a difference – and supplying this demand is a way for companies to future-proof their business and increase their bottom line.

It sounds win-win – and on the surface there’s cause to celebrate a people-powered shift that has seen natural beauty go mainstream. But some companies are plundering the natural resources required to manufacture cosmetic products that sell well. Rainforests and ecosystems are being destroyed to cultivate cosmetic and food ingredients, while pesticides and fertilisers are polluting the ground as manufacturers look for ways to boost the yield. Intensive farming creates barren soil that’s easily eroded and over-harvesting strips the land of its bounty before it has had time to regenerate.

Supplying the growing demand for natural products in a way that causes harm to people and planet is second-wave greenwash. But with any luck another major market trend – the demand for transparency – will be enough to change the way these businesses operate.

A 2018 Cosmetics Business report revealed that ‘miracle potions are out – and in their place, transparency and efficacy are moving rapidly in.’ The report noted that sales among the top 10 classic prestige players are flat; instead the growth in Europe is coming from challenger brands that are smaller and often independent.

We are living in an age of information, with unprecedented access to brand and product details. We no longer trust adverts or what the brands say about their own products: we want independent verification from organisations we can trust. If a beauty product’s ethical and sustainable sourcing credentials don’t stack up, shoppers will look elsewhere. The global 2017 Cone Communications CSR Study found 64% of consumers would ‘purchase more products that are environmentally and socially responsible’ if ‘companies’ health and environmental claims were more believable’.

A logo for ethical sourcing

There is a stamp of approval that demonstrates a product contains ethically sourced materials, though the logo is rarely seen on beauty products. The Union for Ethical BioTrade (UEBT) is a non-profit that supports and verifies company commitments to sourcing natural and organic raw materials with respect. It began as a United Nations initiative, and maintains strong partnerships with UN organisations such as the Convention on Biological Diversity and the UNCTAD BioTrade Initiative.

Companies that work with UEBT show they are sourcing with respect for people and Nature, in a way that respects the local environment and the people who call it home. If musk rosehips are sourced from the foothills of the Andes, UEBT certification ensures that Peruvian communities benefit. UEBT is also helping traditional by-hand farming and harvesting methods to be vouchsafed for future generations.

The prerequisites of ‘sourcing with respect’ are defined by the voluntary UEBT Ethical BioTrade Standard, which is internationally recognised. Developed with inputs from experts, companies, local communities and non-profit organisations, the standard covers principles including the conservation and sustainable use of biodiversity, the sharing of all benefits derived from the use of biodiversity, socio-economic sustainability and a respect for the rights of all involved in bio-trade activities. 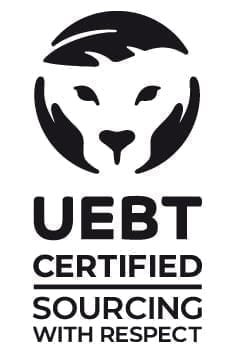 Clean beauty pioneer Weleda has been a trading member of UEBT since 2011, and this year it became Europe’s first beauty brand – and one of only two worldwide – to achieve the new UEBT ESS (Ethical Sourcing System) certification for sourcing with respect. This is big news: around 81% (over 2,000 tonnes) of all the plant ingredients used at Weleda are organic, making the company one of the world’s largest buyers of organic raw materials. If all cosmetics companies opened themselves up to the scrutiny of the UEBT – and operated according to its standard – it would change the world.

Weleda will add the UEBT ESS-certification label to the packaging of its natural beauty products in 2019, reassuring shoppers that the ingredients inside are harvested and collected in a way that respects the diversity of all animals and plants on Earth.

The certification is an external verification of Weleda’s internal sourcing commitments to protect and respect the environment while treating everyone in the company’s supply chains – from farmers to traders and employees – fairly and ethically.

Click here to find out Weleda Skin Food is a MyGreenPod.com Hero

An example of how Weleda’s ethical sourcing works in practice can be found in Bessarabia, Moldova – where the lavender used in 50 Weleda products is grown. While lavender is more commonly associated with French Provence, the tiny country of Moldova, between Romania and Ukraine, is blessed with a warm, dry climate and the fertile black soil that allows vineyards, orchards – and lavender – to thrive.

It may only have 34,000 square kilometres of land, but Moldova – once one of the world’s largest producers of essential oils – is an important growing area in Europe that has been supporting the large-scale cultivation of lavender for centuries.

With the end of the Soviet Union in 1992 many acres of lavender disappeared, but old traditions have been revived and lavender cultivation has taken on a new lease of life. British development expert Bob Hetherington and a Moldovan agricultural engineer initiated the largest organic farming project for lavender in the country, and were astounded by how quickly the project grew.

The close collaboration with Weleda, which started in 2005, brought new energy to the project. ‘200 farming families are now involved and the organic lavender growing area has expanded to about 200 acres’, says Bob.

Once new lavender plants are put in the ground, three years have to pass before the first major harvest – but under favourable conditions the plant can be harvested for up to 30 years. The first plants were ready to harvest in 2005 and since then, each year from late June to mid-July, the workers have cut the mature flowers by hand with sickles.

The collected lavender is processed immediately, without even leaving the field, in a mobile distillation unit for essential oils. This requires engineering knowledge, care and sensitivity. A team of four is permanently on duty as the harvest progresses, receiving containers filled with lavender flowers that are then connected to the mobile boiler and its steam cycle. The distillation process takes about one hour, and from every 100kg of lavender flowers just one kilo of oil is extracted.

The essential oil is then ready to be transported away from the field in barrels, which are sealed immediately. Preserving the potency of the lavender improves the efficacy of the final product – whether it’s the lavender soap, body oil, body wash or bath milk that ends up in Weleda customers’ homes. Elements within lavender essential oil have a direct soothing effect on the central nervous system, helping relaxation and promoting healthy sleep. Restlessness, difficulty falling asleep, tension, cramps, indigestion or problems with the heart and circulation can be regulated more easily with lavender. This explains why, even in ancient times, lavender was very popular for its relaxing and calming effect.

Through Weleda’s Moldovan partnership, lavender has another positive effect: the local partner benefits from the company’s vast experience in the analysis of essential oils and raw material procurement. For the farmers, lavender cultivation has become an integral part of their income, and because of the partnership the village school has been extensively renovated.

Lavender is just one of the many natural ingredients used in Weleda products, and each one is grown and harvested in a way that allows people and planet to thrive. Another example is the company’s use of palm oil, an ingredient that continues to attract debate in the food and beauty industries.

While palm oil is primarily used in food, it’s a natural emulsifier that also helps to create a skin-friendly texture in creams and lotions. Oil palm trees produce a far higher yield than alternatives such as coconut, sunflower and pine kernel, meaning less land is required. Farming palm oil sustainability is key if we are to avoid further deforestation.

As chair of the executive board of FONAP (Forum for Sustainable Palm Oil) and a member of RSPO (Roundtable on Sustainable Palm Oil), Weleda is working to improve the certification systems for palm oil, which would have a big impact across the industry. Until standards improve, FONAP members have voluntarily accepted add-on criteria, including a ban on plantations on peatlands and other carbon-rich land, a ban on the use of highly hazardous pesticides and the application of strict reduction targets for greenhouse gases.

Weleda has been a pioneer of clean beauty since 1921; it has been creating authentically natural herbal medicinal and bodycare products for over 95 years. While some beauty brands are just waking up to the demand for products that don’t harm people or planet, Weleda is forging ahead and pushing for industry-wide change. In the sprit of transparency, Weleda is showing consumers what we can – and should – expect from truly natural beauty products.

At the same time, Weleda’s operations serve as evidence that the cosmetics industry has the potential to contribute to a world in which people and biodiversity thrive. By operating with conscious intent and supporting small-scale farmers or gatherers, cosmetics companies can source the raw materials for their natural products while at the same time protecting biodiversity and livelihoods.