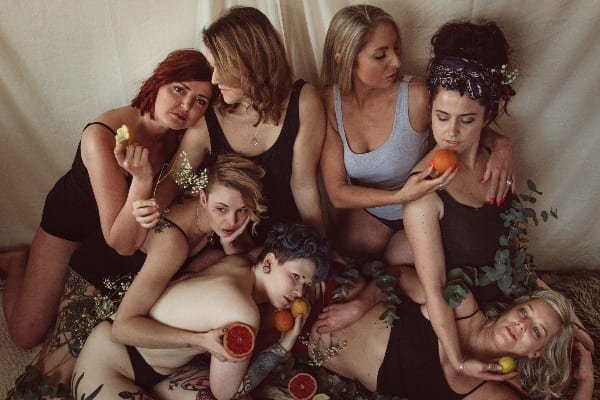 This article first appeared in our Health Revolution issue of My GreenPod Magazine, distributed with The Guardian on 24 July 2020. Click here to subscribe to our digital edition and get each issue delivered straight to your inbox

Over the last hundred years, humans have been duped into thinking that sweating is bad news.

Thankfully, science has demonstrated that sweating is a crucial process that rids our bodies of toxins, and that any resulting odours can be combated with natural fragrances. But today’s big con is that deodorants require mountains of unnecessary plastic packaging.

It frustrates me that people use deodorants that have not just one but usually two types of plastic within the tube’, says Alice Bardwell, founder of Pit-Tastic! deodorant bars. ‘That plastic takes 450 years to biodegrade.’

Alice points to the mainstream deodorant spray – 600 million of which are sold in the UK each year. ‘Aerosol cans are difficult to recycle as they have to be empty and clean – not an easy task’, she says. ‘A recent study also showed that if one million people switched their aerosol, 696 tonnes of CO2 would be saved. To me this is a no-brainer. Zero packaging that is 100% biodegradable. Done.’

Alice was helping people to go plastic free a long time before she founded Pit-Tastic!; she launched Fillfull – one of the UK’s first plastic-free shops – which uniquely sold completely dairy- and gluten-free products and cosmetics.

After seeing the huge shampoo bar trend, Alice ‘tinkered’ with various pastes and powders and ‘sniffed a lot of armpits’. In April 2019, she perfected the formulation for an effective, natural and plastic-free solid deodorant bar based on the philosophy that ‘less is more’.

Pit-Tastic! bars have a very short list of ingredients; the Standard bars contain coconut oil, shea butter, beeswax, bicarbonate of soda and distilled natural essential oils for fragrance. The Sensitive bars replace bicarbonate of soda with arrowroot and the Vegan bars use sunflower wax instead of beeswax.

The four different fragrance options – Orange and Grapefruit, Rose and Ylang Ylang, Lemon and Lime and Lime and Tee Tree – contain essential oils that have been carefully selected for their natural healing powers; rose alone has over 100 presumed health benefits.

The health-boosting formulations are a far cry from mainstream deodorants, most of which use aluminium salts to block underarm pores. This hampers the body’s natural detoxification process. ‘In my previous experience, antiperspirants that contain aluminium salts don’t keep underarms fresh unless you pile more on over the day’, Alice tells us.

Instead, Pit-Tastic! bars balance the pH of the underarm, and neutralise odours by reducing bacteria.

‘The reason it took me so long to formulate the Pit-Tastic! range was because I wanted to create a natural deodorant that was effective for odour’, Alice says, ‘so even when you’re exercising vigorously there should be no stink.’

In addition to aluminium salts, other chemicals to watch out for in deodorants include triclosan, which the FDA has banned from consumer soap products in the US, and parabens, which are synthetic chemicals that have been linked to hormonal imbalance.

The word ‘fragrance’ or ‘parfum’ can be used in the ingredients list to mask hundreds of other chemicals, including phthalates. Phthalates, such as propylene glycol – sometimes called ‘non-toxic antifreeze’ – have been linked to a higher risk of birth defects in women.

Sweat and the media

Ads for the first antiperspirant essentially scared women into thinking that they might stink – without even realising – and that this was no way to keep a man.

Instead, the ad proposed, women should cover their armpits with a solution so acidic that it actually burned through clothes.
The idea that we’re not allowed to be sweaty has been reinforced through decades of advertising; ‘Never let them see you sweat’ was Gillette’s slogan of choice in the early ‘80s.

‘We all get sucked in by marketing and TV adverts – not all of which support our natural health’, Alice tells us. ‘Large corporate brands also state that aluminium chlorohydrate is regulated and deemed harmless by the FDA. What perhaps is not stated is the potentially dangerous process by which it blocks the body’s detoxification. These chemicals are authorised to be used on the body – day in, day out – for profit. The global deodorant market is estimated to be worth $69 million – and corporations want a slice.’

A road to recovery

Alice has firsthand experience of the healing and cleansing powers of nature. The Pit-Tastic! range was perfected during her recovery from a stroke; the stirring, mixing and fine-tuning of ingredients was a soothing process that helped her brain injury.

‘I was told initially that the road to recovery could be years’, Alice tells us. ‘My neurologist said I should just let it be that I may never be the same again. Anyone beyond close friends and family couldn’t necessarily see there was anything wrong with me – they just thought I was maybe a bit quiet and couldn’t join in with some of the banter.’

As a 39-year-old single parent Alice remembers some ‘very low times’ – yet she also felt she had a clean slate. ‘I had to learn to do things again, but this is what drove me to do something I wanted to do in life’, she tells us. ‘Something that was aligned with my values and experience.’

Alice had already started to ‘mess around’ with the product, but getting stuck in allowed her to work in silence. ‘I did not need to write or read’, she explains. ‘Working with our hands creates entirely new neural pathways that could not be made in a less physically active environment.’

Alice’s initial formulation was concocted over a bain-marie; the process of gradually adding and stirring allowed her to focus on something positive. ‘Every time I made these bars it was almost like being a witch casting a spell over a cauldron’, she says. ‘It was ever so therapeutic and it got me to where I am now – both physically and psychologically.’

Alice now hopes to set up a charity that supports mental health by providing a space for people to come together. ‘I have known and lost three people in the past few years to suicide’, Alice tells us. ‘This sad and ever-growing figure impacts too many people at present.’

Alice wants people to get together to stir the Pit-Tastic! – just as she did at the start of her journey when formulating the bars – to allow conversation and provide support for mental health. ‘I know this has helped me and my mental health to flourish’, Alice tells us, ‘and I hope it can help others, too.’