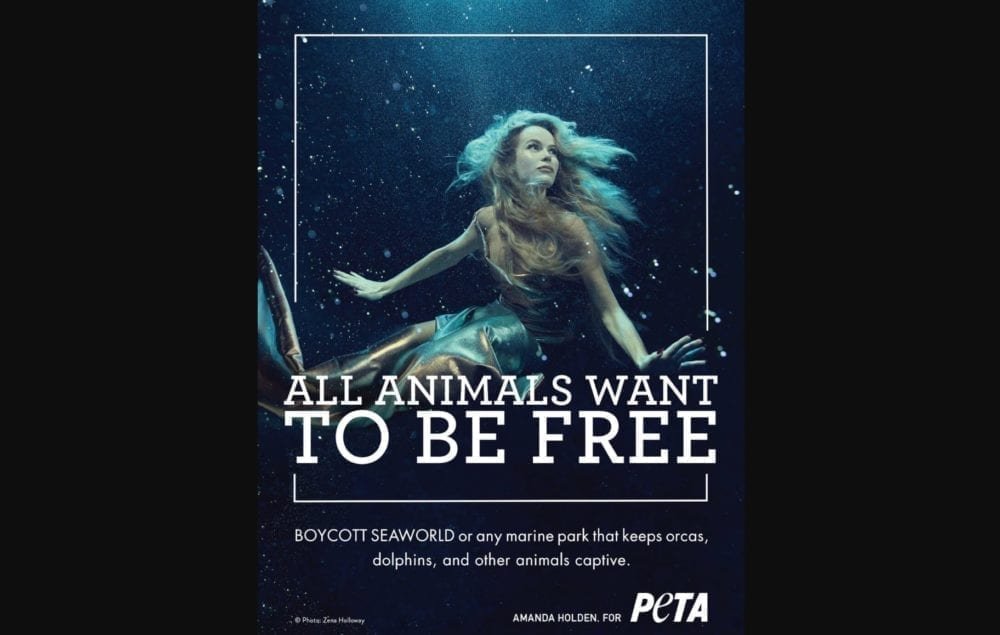 Wearing a billowing gown and pressing her hands against a glass wall, Amanda Holden is entirely submerged underwater in a new PETA campaign that states ‘All Animals Want to be Free’.

The ads also read, ‘Boycott SeaWorld or any marine park that keeps orcas, dolphins and other animals captive.’

The photographs were taken by underwater photographer Zena Holloway.

In an accompanying video, the Britain’s Got Talent judge explains that orcas suffer in marine parks like SeaWorld, where they swim monotonously around tiny concrete tanks filled with chemically treated water.

They gnaw on the metal bars of their enclosures until their teeth break, and are given anti-anxiety drugs to manage stress-induced behaviour.

‘These are animals with their own cultures and their own language’, says Amanda in the video. ‘The more we understand about the extraordinary capabilities of these wonderful whales, the more we can realise just how disgusting their captivity and confinement is.’

Amanda points out that while no whales or dolphins have been held captive in the UK since the 1990s, marine parks continue to operate abroad.

PETA – whose motto reads, in part, that ‘animals are not ours to use for entertainment’ – is calling on the public and businesses such as travel operator Thomas Cook to stop supporting the marine park, especially in light of its recently failed animal-welfare audit.

Amanda Holden joins a long list of celebrities – including Krysten Ritter, Sharon Osbourne, Noah Cyrus, Paul O’Grady, the late Sir Roger Moore and many others – who have teamed up with PETA and its international affiliates to speak out against marine-mammal captivity.

Click here to find out which celebs are backing a fur-free Britain.