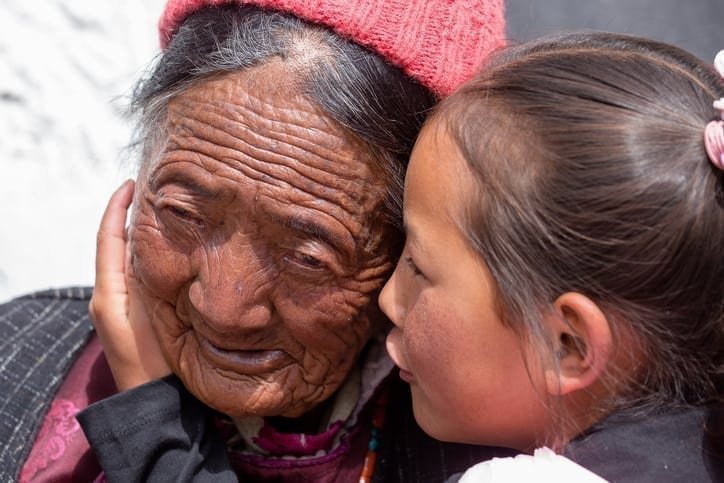 In Britain today, we have millions of capable people over sixty or seventy, who have no sense of a positive role they could play in our society. This is a waste of potential, for them and for all of us, and it’s sadly different from the key roles that elders played in traditional tribal societies.

Clearly we live in a different world than those tribes, but we need to re-invent some of their wisdom. I’ve been exploring creative ageing for 10 years, as a writer and workshop leader. There are big opportunities here, but the over-sixties will have to seize them for themselves.

Think about the ‘opinion leaders’ of our times: who are they? Movie stars, sports stars and the faceless people behind the media. Most of them are young, and out for their own interests. Probably they find old age alarming: they have no idea how the experience of mature years could be of service to society.

Let’s compare this with the opinion leaders of tribal societies, who were the elders. When I talk about tribal society, I don’t just mean ancient history: there are millions of people still living like this. I’ve spent time with some of them: semi-nomadic Bedouin in the Tunisian Sahara, villages in remote corners of Ethiopia, Nepal and elsewhere.

What is an elder?

We may imagine a tribe as led by a chief, but much of the power and wisdom is often held by the elders as a group. This could be a circle of men, women, or both. It was the elders who held the history and the values of the tribe. Everyone looked to them for guidance in a crisis, for mentoring the young, to speak out for justice and the common good, and to mediate in conflicts.

Because villages are close-knit communities, and people mostly live in extended families, the elders are fully part of everyone’s lives, not isolated as they often are in Britain. This may all sound too different to be relevant: so how could we re-create the qualities of elderhood in our society? Here are some pointers.

Simple presence: If you’re at ease with yourself, calm amid setbacks, focused on the positive, your presence alone will be a teaching and a role model helping those around you, of all ages.

Embodying and upholding values: This is a major role of tribal elders, and much needed in our society. This means living the principles you believe in, such as honesty, integrity, forgiveness, and speaking out for these values when you see them ignored.

Elders as a group: In these later years, the balance between individual and collective life swings more towards the group: this means shared wisdom, mutual support, and perhaps shared action too. Our new elders need to gather as groups, and sometimes act collectively.

Friendship: Slowing down should be a goal and a benefit of elderhood. This creates time for you to be a friend: to other elders, to your children and grandchildren, and wherever it’s needed. Sharing our love, your wisdom, your values with others through friendship is part of your legacy.

Facing ageing and death: I was closest to my father, and learned most from him, in his last years and his death: I know many others who have found the same. If you can find happiness even in your decline, and face death positively, you are learning for yourself and younger generations.

Giving back, serving the greater good: This is part of living your values, and creating a legacy. Elders are able to look beyond their own needs.

Opening to the beyond: the years of elderhood are a chance to open to the world of spirit, to whatever lies beyond death. This is a fitting part of our later life, and probably serves the tribe as well.

The Spirit of the Sixties

Many of our elder generation can vividly remember the 1960s as formative years. We really need some of that Sixties spirit today, and it’s another way that modern-day elders could help us all. The reality of the Sixties is a lot subtler than simplistic images of Swinging London and hippie California.

Protests and demonstrations were a big feature of the 1960s. Many thousands of people took to the streets, frequently, to speak out for what they believed in. And these protests actually affected politics: for example in France in May ‘68, or the Vietnam demos in the US.

Although there was plenty of bleak news even then, people believed that positive change was possible, and that collective action could help. If the Baby Boomers could help us all recover this outlook, it could make a big difference. The first step is probably for the elder generation to reach out and speak up with each other, and start to find their positive voice.

Commemorating Silver Sunday (07 October), Alan Heeks will be hosting an event entitled, ‘Our Generations: Multi-generational Conservation Weekend’, at Hazel Hill Wood, near Salisbury in Wiltshire, celebrating the role of elder people. Click here for more information about the weekend, including a free Elders Circle on Silver Sunday.

Click here for more about the UK launch of Down to Earth, the documentary that captures the wisdom of Earth Keepers.