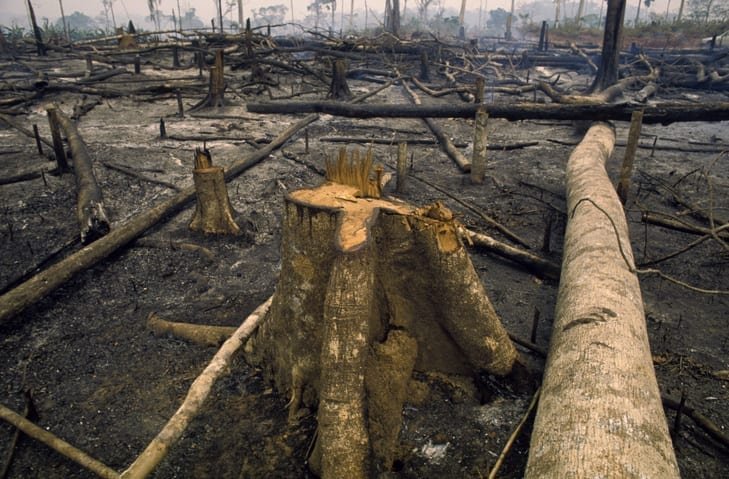 Environmental and human rights advocates have called on global brands to honour their commitment to end deforestation before a self-imposed deadline expires this year.

The newly released letter was sent to the Consumer Goods Forum (CGF), a CEO-level organisation that brings together over 400 global retailers and manufacturers.

‘Our default – cheap meat from industrial animal agriculture – is the greatest contributor to deforestation in every Amazonian county.

‘It’s time to embrace a more sustainable, plant-forward norm. Institutional leadership in paving the way for this more resilient food system is key in saving our world’s most biodiverse ecosystem.’

The coalition of more than 75 environmental and human rights groups reiterated their 2019 call for CGF members to ‘take ambitious and immediate action to eliminate and remedy deforestation, peatland destruction, and human rights violations throughout their supply chains and support necessary legal and policy reforms.’

In addition to climate and environmental concerns, the groups are also concerned that noxious haze from burning forests will further exacerbate the public health consequences of the Covid-19 pandemic.

‘Last September, our organizations wrote to demand evidence that the CGF and its member companies are prepared to take real action to eliminate and remedy deforestation and human rights abuses in their supply chains.

‘Since then, fires, deforestation, and human rights abuses have gotten worse—destroying irreplaceable ecosystems and threatening communities across Latin America, Africa, and Southeast Asia. Yet, CGF and its member companies have done little to leverage their market and supply chain influence for tangible change. Most egregiously, the CGF and its member companies have largely continued sourcing from the same suppliers responsible for deforestation and human rights abuses without repercussion or accountability—providing market access, contracts, and funds to the perpetrators of these continued violations.’

Deforestation on the rise

In 2009, CGF members pledged to end deforestation and human rights abuses in their supply chains by 2020, emphasising the need for action in high risk commodities like soy, cattle, palm oil and pulp and paper.

Five years later, at the 2014 Climate Summit in New York, 60 additional companies joined in this pledge as a part of the New York Declaration on Forests.

But deforestation increased last year – a disturbing trend highlighted by headline-grabbing fires in the Amazon – and early reports indicate that this year’s fire season will be even worse. Brazil just recorded its fourteenth-straight month of increased deforestation.

‘With annual fires set to decimate the forests of the Amazon and Indonesia once again, Consumer Goods Forum companies remain complicit in the destruction of the world’s last standing forests.

‘CGF companies should immediately hold to account all suppliers responsible for deforestation, land grabbing, and human rights abuses against Indigenous and local communities. The CGF’s failure to meet its own deadline to achieve zero-deforestation is a definitive sign of the failures of voluntary corporate commitments and the industrial agricultural model writ large. There is a clear need for regulation of the companies and industries driving deforestation and the climate crisis.’

‘These fires are preventable’

Ongoing and increasing deforestation poses risks to wildlife and ecosystems, exacerbates climate change and may have disastrous public health consequences during the global Covid-19 pandemic.

‘The noxious haze from burning forests hospitalizes and kills hundreds of thousands of people due to respiratory illness under normal circumstances—a situation poised to be a public health catastrophe given COVID-19’, the letter notes.

‘These fires are preventable, and those companies that continue to provide funding and contracts to those responsible for the fires will be held publicly accountable for this unfurling environmental and human rights crisis.’

‘The world’s forests are burning, and a small handful of giant agribusinesses like Cargill, Bunge, and JBS are responsible. These companies have continued business as usual because many of the world’s most recognizable and beloved grocery stores keep signing contracts with them. There have been no consequences for deforestation.

‘Our planet cannot handle this abuse and people want companies to take responsibility and make sure rainforest destruction and human rights abuses don’t end up in our grocery carts. It’s time for Ahold Delhaize, Costco, and other stores to hold to account stop buying from the companies driving the crisis.’