The Year of Climate Action 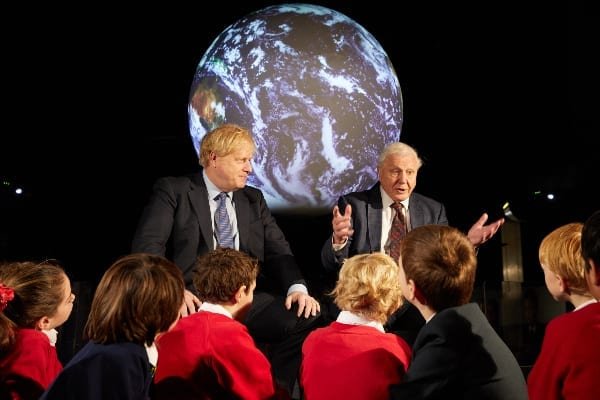 The Science Museum Group has announced a major public programme focused on climate and solutions to the urgent challenges facing the world, in support of the UK Year of Climate Action.

It was launched by Boris Johnson at the Science Museum, where guests included Sir David Attenborough and the Italian Prime Minister, Giuseppe Conte.

Sir Ian Blatchford, director and chief executive of the Science Museum Group, revealed that climate will be the theme for this year’s Manchester Science Festival in October.

The Science Museum will also present the UK’s first significant exhibition on carbon capture and storage to explore solutions for greenhouse gas removal from the atmosphere.

Both projects will open to coincide with COP26, the 26th United Nations Convention on Climate Change in Glasgow in November 2020, when world leaders and 30,000 delegates will convene to develop an international response to the climate emergency.

‘The moment of climate crisis is with us and our planet needs us all to act now. The UN’s 26th Climate Change Conference in Glasgow is a critically important opportunity for governments to act decisively – we know what has to be done to cut carbon emissions, and we can’t afford to put off a decision again because each delay makes it so much harder to avert more damaging climate change.

‘It is also important that we all do our bit. That is why I welcome the Prime Minister’s announcement of the UK Year of Climate Action and l hope it will galvanise real change. I also look forward to seeing how the Manchester Science Festival and the Science Museum’s exhibition about carbon capture spark discussion about how to protect our fragile planet.’

PM’s call for courage and ambition

The Prime Minister and Sir David Attenborough joined school children taking part in climate workshops at the Science Museum to mark the launch of the Year of Climate Action.

The aim of the Cabinet Office COP26 initiative is to increase awareness of and support for changes needed to reach the UK’s net zero emissions target by 2050.

‘Let’s make this year the moment where we come to together with the courage and the technological ambition to solve man-made climate change and to choose a cleaner and greener future for all our children and grandchildren.’

The science of climate change

A decade after the Science Museum opened its climate science gallery Atmosphere, which has now been visited by more than 5 million people, Sir Ian also revealed how exploring solutions to the challenges posed by a warming world will be a central theme in the next decade of transformation of the museum.

‘It is a privilege to host the Prime Minister and Sir David for the government’s launch of the UK Year of Climate Action. There is no more pressing issue facing the world, and the five museums in the Science Museum Group are uniquely placed to engage a huge audience around the science of climate change, and the technological challenges and solutions around the crucial energy and food transitions we need to achieve. Our visitors are the engaged citizens and scientists of now and tomorrow.’

Complementing the Science Museum Group’s public programme on climate, the Science Museum will host a series of conferences exploring the theory and practice of sustainable curating in the museum and heritage sectors. The first will take place in spring.