A new energy system will see you generate, store and use your own renewable power – and it’s closer than you think 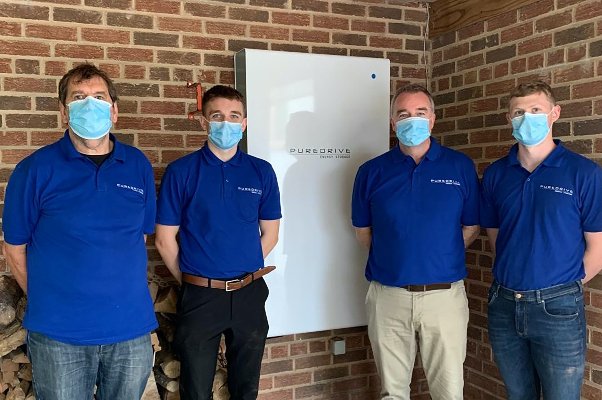 The electrification of our homes and planet has come hand in hand with a rapid expansion of more efficient electrical devices – from LED lights and electric heaters to electric vehicles (EVs) and computers.

Powering these electronic devices with home-generated renewable energy – from solar panels or a wind turbine, combined with a home battery system – provides an opportunity to simplify and decentralise the energy network.

With this comes greater energy independence, higher levels of energy security and safety – and, perhaps best of all, no energy supplier bills.

Mark Millar, CEO of Puredrive, is on a mission to help people disconnect from what he sees as an outdated energy network we inherited in 1886 from Nikola Tesla’s AC-based power distribution network.

‘Tesla’s AC model made energy more efficient and accessible, removing the restrictions of Edison’s hyper-local DC energy network’, Mark explains. ‘He never envisioned it could be used as a control mechanism to be managed by the few. Businesses saw the opportunity to monetise and control energy distribution, which eventually led to the AC distributed electrical network that remains the current paradigm.’

The same centralised energy system is still firmly in place today, and remains managed by a handful of players.

‘Globally there are probably five large companies, creating almost a monopoly considering the size of the global market’, Mark tells us. ‘The capital costs required to enter this market present the biggest barrier to entry. Smaller energy suppliers have tried to differentiate through services and procure through the wholesale market, but as we see again and again, wholesale pricing increases lead to the demise of smaller energy suppliers.’

The distribution network is also largely unchanged, with stations predominantly powered by the same fuels – though the share of fuel types has changed over the years. We now have less coal and more gas, plus nuclear and renewables, too.

Yet while wind and solar are included in the mix of energy supplied, these sources of power mainly still hook into the current centralised system.

For all these reasons, it’s no surprise that people are looking for alternative home energy solutions that are sustainable and secure.

‘From what we understand, there is a growing desire for homeowners to take more control of their own energy’, Mark says. ‘With so much uncertainty in the world, both locally and globally, a more self-sufficient energy option is being sought – one that is greener and creates greater energy independence.’

Freedom from a centralised system

Puredrive’s PureStorage AC battery system was shortlisted for the ‘Most Innovative Product’ award at the Solar & Storage show in November 2021, where the company also presented a new product: an EV charger that can operate with a home battery system, and that can even charge using electricity generated from your own solar panels.

With a smart option to operate with variable rate tariffs, this could be an exciting solution for anyone drawn to green power, a lower carbon footprint and energy independence.

The release of the charger and complementary products from Puredrive marks what Mark describes as energy’s ‘red pill, blue pill moment’: we can choose to take control of our own energy, or remain tied to the centralised power paradigm.

The EV charger itself is not the solution; rather than simply taking power away from the system Mark is trying to overturn, he wants to inspire a completely new way of thinking.

By combining the green EV charger with home insulation, solar and wind, a battery and an air-source heat pump for hot water and heating, we could turn the power paradigm on its head.

Mark draws parallels with electric cars, which he says are currently supporting the centralised system. ‘EVs are mainly being designed to match the appearance and performance of traditional petrol cars – going 0-60mph in less than two seconds’, he says. ‘It’s an old ‘petrolhead’ mentality, arguably required to show that EVs can match the capability of their petrol forerunners.’

For Mark, moving towards an electric car design that’s more fit for purpose would make it possible to power your home and also your EV through self-generated energy.

‘Several years ago I led a project to electrify tuk-tuks’, Mark tells us. ‘It became apparent that the vehicle, plus the driver and a load, could be powered with just one 5kWh battery per day – very different from the 90kWh battery currently used in Teslas – that could easily be charged in the evening for use the next day.’

Mark assures us that he’s not advocating a move to tuk-tuks, but says this example reveals how the potential – and the opportunity – for self-powered homes and cars is drawing closer.

Moving to a sustainable and independent energy supply requires quite a bit of kit, and for many the upfront cost is the barrier – more so than ever now the government has withdrawn financial support for domestic solar and wind installations.

For Mark, queries around cold, hard cash are reminiscent of payback calculations for retrofitting double glazing to homes.

‘Today there is no cost for including double glazing because it is integrated into every newly built home’, he says. ‘No one seems to ask about the payback any more; once we understand that certain products are just the right thing to do, the question of finance seems to evaporate.’

Yet prices are important, and fortunately they are relatively low. Costs would be recouped if all new homes were fitted with a high standard of insulation, solar panels, battery storage, a green EV charger and an air-source heat pump with a COP (Coefficient of Performance) value of three or more.

They have been estimated at an additional 2% of the total cost of an average home build, but this doesn’t factor in the considerable cost and time savings of removing the need for a gas distribution network.

Under this structure the grid would be used as a back-up to distribute renewable energy that has been locally generated.

‘One of our projects in social housing successfully reduced a three-bedroom home’s grid energy usage from 40kWh per day to 8.5kWh per day’, Mark reveals. ‘That was two years ago, with a relatively small solar array. The key is to minimise the home’s energy requirement and grid use.’

While Mark’s vision sees the grid as a back-up service provider, it is possible to power a house with entirely home-generated renewable energy.

Currently, the average daily solar generation potential of a UK home is 18kWh. A home kitted out with eco products and an electric car would use 19kWh – 15kWh of electricity and and average daily EV charge of 4kWh – so on average we are already very close to the target.

‘These calculations only consider daily energy averages’, Mark explains. ‘They don’t factor in seasonal variations in solar generation, but they provide an important starting point.’

In a bid to help realise a transformed energy system that gives homeowners control of their energy and bills, Puredrive will launch its EV charger – which integrates with its battery system – to the public this year.

The charger and battery will be supported by the release of two other home products that have been designed to achieve the company’s mission of decoupling our dependence on the grid, providing higher levels of energy security and supporting the decarbonisation of the home.

With this new technology and joined-up thinking, the possibility of a renewable, decentralised, secure, safe and independent energy system is closer than it has ever been.