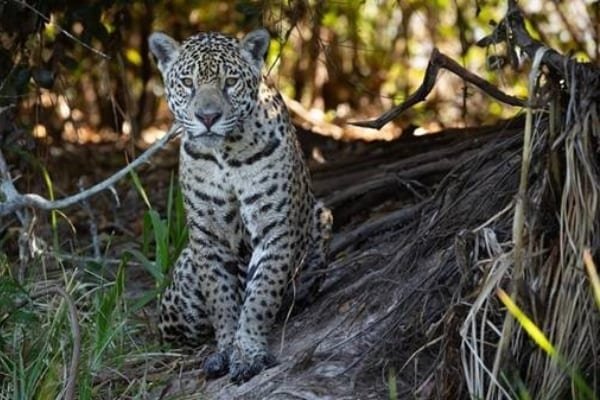 Brazil, home to two-thirds of the Amazon rainforest, is one of the riskiest countries from which the UK imports key agricultural and forest commodities, according to new data released today (10 July) from WWF and RSPB.

This means it is in jeopardy of deforestation and other habitat destruction.

Brazil is home to 464 globally threatened species, including the giant anteater and the black-faced black spider monkey.

In the latest figures available, 2,248 fire outbreaks were detected in the Amazon biome for the month of June – the highest number for 13 years. This is 36% higher than the average of the previous 10 years.

‘It’s no coincidence that fires have already sparked in Brazil this year – and in the areas that have suffered deforestation from commodities including soy.

‘These fires are not a natural occurrence in the Amazon – they are set deliberately to burn trees that have been illegally cut to clear the way for agriculture.

‘But the cost is too high. The UK must take a stand against the destruction by bringing in new laws and policies to cut deforestation out of our supply chains. UK consumers should not be forced to unwittingly contribute to the Amazon burning.’

MIKE BARRETT
Executive Director of Science and Conservation at WWF-UK

Brazil represents 13.9% of the total UK overseas land footprint at risk, meaning we rely on an average of more than 800,000 hectares – around five times the size of Greater London – to supply our demand for key agricultural products.

UK demand for soy, timber, pulp and paper, beef and leather, as well as other high deforestation risk commodities, is having a heavy impact on some of the world’s most nature-rich landscapes. Unsustainable production often results in large-scale deforestation and is linked to devastating fires.

‘In the UK, communities are fiercely protective of their local beauty spots and nature habitats – planning applications to cut down woodlands time after time provoke a powerful backlash from residents.

‘If the UK Government wants to be taken seriously as a global environmental leader as host of the COP26 climate summit next year, it needs to urgently take action and introduce new laws to ensure agricultural supply chains are not wrecking the planet.

‘It is time for the government to stop passing the buck to consumers.’

New data released today from WWF and RSPB detail the impact of key commodities, with specific examples from biodiverse landscapes.

Alongside beef production, soy has historically been one of the commodities responsible for deforestation in the Brazilian Amazon and destruction of its neighbour, the species-rich Cerrado grassland savannah.

The most common form of soy imported into the UK is soymeal (56%), which is largely used in animal feed. Soy is also ‘embedded’ in imported livestock, meaning it has already been fed to imported animals.

Only around 27% of soy was officially certified as not being associated with deforestation or destruction of habitats.

This means almost 75% could be a deforestation threat to landscapes globally. In Brazil, just 2.8% (or 3.2m tonnes) of all soy produced was certified sustainable.

‘The world is burning and for decades we’ve known why. When we eat beef in Britain we are fuelling the destruction of our most precious flora and fauna some 6,000 miles away in Brazil.

‘The quickest way to call time on this injustice is to radically reduce demand for beef and soy by going vegan now.’

The UK is dependent on soy imports from Brazil – nearly half of which comes from the Mato Grosso state.

Mato Grosso is in a unique position as it covers three critical biomes, with 53% in the Amazon, 40% in the Cerrado and 7% in the Pantanal.

The volumes imported from this one state are so large that 93,000 hectares of soy plantations are needed – equivalent to more than half the size of Greater London.

Deforestation in the Amazon parts of Mato Grosso increased by 19% last year. Soy production in Mato Grosso is likely to be putting pressure on forests either directly or indirectly, by replacing cattle ranches which themselves replaced forests.

WWF is calling for the UK government to introduce new laws and policies to take deforestation and the destruction of other natural habitats out of supply chains to help prevent these fires from occurring.

The charity is also urging the government to ensure that post-Brexit trade deals won’t contribute to environmental destruction.