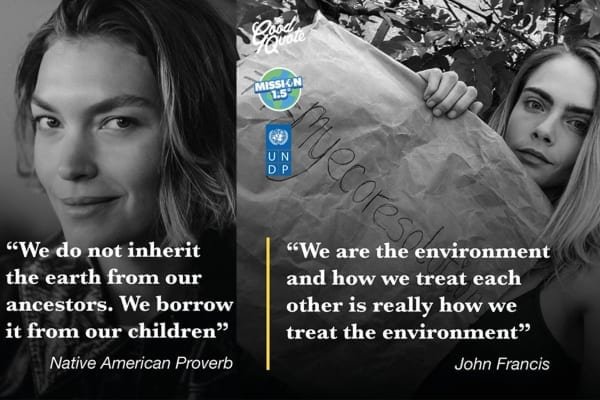 Yesterday (12 June), the United Nations Development Programme teamed up with social media platform The Good Quote for its Mission 1.5 campaign.

The campaign, which aims to address the disconnect between global citizens and government on climate action, brought together celebrities from around the world.

The film stars, musicians, models, sportspeople and young climate campaigners shared their favourite quotes about nature on the Instagram platform, which boasts over 20 million followers.

This is one of the many activities planned this year as part of the UN’s ‘Time For Nature’, a call to action to combat accelerating species loss and degradation of the natural world.

Mission 1.5 is named after the collective effort to limit global temperature rise to 1.5°C, the temperature which scientists agree is safe.

A mobile game of the same name, initiated by the UN Development Programme with support from the University of Oxford, Twitter, game developer Playmob and a group of NGOs, puts people in the role of government leaders.

The game educates people about climate policy and provides a platform for people, many of whom are not of voting age, to vote on the climate action they want to see their governments adopt.

At the end of the game, players can vote on the climate action they want to see in their countries.

These votes are processed by experts at the University of Oxford and will be delivered by the UNDP to world leaders before the end of the year.

The game has already been played by over 1.2 million people, and it is expected to become the largest ever survey on climate change.