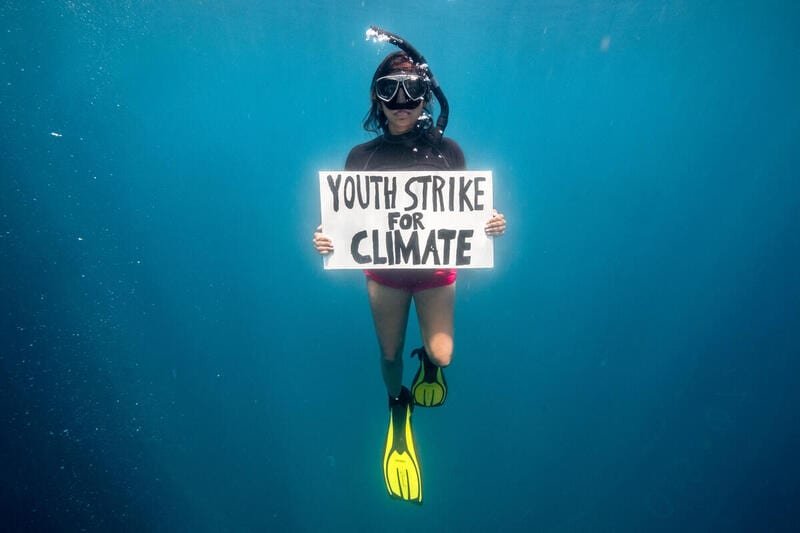 Mauritian scientist and climate advocate Shaama Sandooyea has held the world’s first ever underwater climate strike at the heart of the Indian Ocean.

The protest took place at the Saya de Malha Bank, a climate-critical site owing to its vast seagrass meadows, 735km off the coast of Seychelles.

She is currently on a research mission with the Greenpeace ship Arctic Sunrise to study the biodiversity in the area and show the importance of healthy oceans for tackling the climate breakdown.

Strikes for the climate

Sandooyea, a marine biologist and one of the co-founders of Fridays for Future Mauritius, is at the Saya de Malha Bank with the Greenpeace ship Arctic Sunrise as part of an expedition surveying this important but little-researched area.

The bank is known to contain the world’s largest seagrass meadow, a major absorber of carbon dioxide.

The area is also rich in wildlife, including sharks and pygmy blue whales. As a fish spawning ground it also plays an important role in maintaining the staple diets of millions in coastal communities across the region.

In September 2020, also as part of Fridays For Future mobilisations, the young activist Mya Rose Craig held the most northerly climate strike on the Arctic ice edge to show the impacts of the climate crisis in the melting frozen ocean.

‘We can’t keep treading water on the climate crisis. I’ve taken a stand here in this beautiful, remote area of the Indian Ocean to deliver a simple message – we need climate action and we need it now. With fellow Fridays for Future activists around the world, I want to see the climate crisis taken seriously. Reducing emissions and protecting our oceans are some of the best ways to do that.

‘Being from an island nation I know first-hand just how important healthy oceans are, not just to our climate but to the billions of people in the Global South who depend on them. That’s why global leaders must commit to a network of ocean sanctuaries protecting at least 30% of our oceans. We need urgent action if we are serious about supporting people, fighting climate breakdown and protecting wildlife.’

Healthy oceans store huge amounts of carbon, meaning they offer a key solution in the fight against climate breakdown.

Greenpeace is calling for a strong Global Ocean Treaty to enable protecting at least 30% of the oceans by 2030 through a network of sanctuaries kept off limits to human activity.

These would allow marine ecosystems to build resilience to better withstand and fight against rapid climatic breakdown.

Sandooyea joined youth activists and climate strikers across the world who are taking action as part of Fridays for Future’s March 19 strike.

Together these young activists are demanding immediate, concrete and ambitious action from world leaders as the climate crisis continues unabated.