A Celebration of Reggae 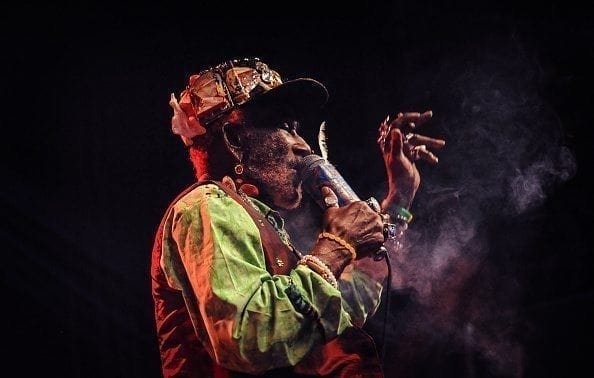 Lee ‘Scratch’ Perry turns 81 this year – and he’s still showing the younger generation of MCs, rappers and sound technicians how it should be done.

The Jamaican legend – dubbed the ‘Peter Pan of the music world’ – kickstarted the careers of Bob Marley and The Clash. Perry’s 1960s and ‘70s experimental sounds pioneered many of the dance, hip hop and big beat music genres we hear today.

A Celebration of Reggae

On 03 March, Lee Perry will venture out once more to headline at A Celebration of Reggae, one of the UK’s largest reggae music festivals.

If you love the reggae vibes, head over to the Somerset weekender and marvel at the great man’s staying power. You can decide for yourself whether it’s down to the genes or the greens.

A Celebration of Reggae 2017 will take place 03 and 04 March 2017, at the Cheese and Grain in Frome, Somerset. Click here to book your tickets.

So what’s this reggae legend’s secret? How does Mr Perry move like a man 30 years his junior?

As a vegan, Lee has a strict diet of vegetables and healthy foods. At an early age, Lee decided that eating meat was not for him.

‘A healthy outside starts from the inside! Animals are my friends and I can’t eat my friends. You are what you eat so I am vegetarian and I am ageless.
Don’t eat the dead to stay alive.’

Lee has also said water is essential to looking and feeling young, and A Celebration of Reggae is in support of the charity WaterAid.

The Reggae Community Art Project at the festival will be in support of WaterAid. Lee ‘Scratch’ Perry will draw some amazing creations, and the community will then work on the pieces of art to create a community mural involving hundreds of people!

Perry worked for Joe Gibbs at Amalgamated Records for a few years before creating his own label, Upsetter Records, in 1968. His first major single, People Funny Boy, was well received – 60,000 copies were sold in Jamaica alone.

In 1973 Perry built a studio in his back yard to have more control over his productions. He continued to produce notable musicians such as Bob Marley & the Wailers, Junior Byles, Junior Murvin, the Heptones, the Congos and Max Romeo.

With his own studio, ‘The Black Ark’, at his disposal, Perry’s productions became more lavish as the energetic producer was able to spend as much time as he wanted on the music he produced.

Pretty much everything Perry recorded in The Black Ark was done using basic recording equipment; through sonic sleight-of-hand Perry made it sound unique.

Friday night
Watch the man who defies the years headline at a Celebration of Reggae weekender at the Cheese and Grain on Friday 03 March 2017. Lee will be supported by Bruton Dub Club.

Saturday 10.00-16.00
A free and family-friendly daytime event on Saturday will include DJs from Frome Dub Club. There’ll be great food stalls, a kids’ area, community art in partnership with Wateraid, face painting and lots of dancing!

A Celebration of Reggae is a co-promotion with Angelfish LIVE, GM3 Music, SNG.

Click here to book your tickets for A Celebration of Reggae at the Cheese and Grain.