From today, Tesco will be urged to cut links with forest destroyers and slash meat sales by 50% 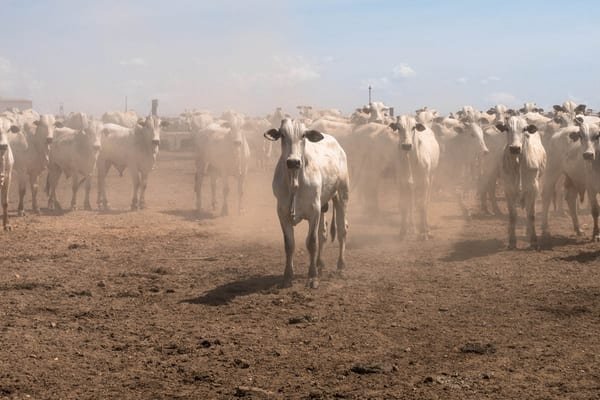 Today (05 August), Greenpeace UK will launch a campaign against Tesco, calling on the UK’s largest supermarket to stop buying meat and dairy from companies involved in destroying the Amazon and to halve the amount of meat it sells by 2025 to protect people, wildlife and the climate.

Tesco is buying meat from two UK companies, Moy Park and Tulip, which are controlled by JBS –the world’s most notorious forest destroyer and largest meat-packing company.

Greenpeace has exposed JBS time and time again for its part in deforesting the Amazon and has been fined billions of dollars by Brazilian regulators.

A new investigation by the Bureau of Investigative Journalism and Reporter Brasil, published this week, has also revealed for the first time that JBS is not just turning a blind eye to its suppliers’ violations but has been directly implicated in transporting deforestation-linked cattle to one of its own direct suppliers.

Industrial-scale meat production, which includes clearing land for beef production and to grow crops like soya for animal feed, is the biggest driver of deforestation globally – but a recent YouGov poll conducted for Greenpeace revealed that only 15% of Britons are aware of this.

The poll also revealed that over half of Britons would consider rejecting meat products linked to deforestation and that one in four think supermarkets should sell less meat.

Tesco sells more meat than any other UK supermarket, making its soya footprint the largest in the UK.

Of the 3.2 million tonnes of soya the UK imports each year, the vast majority (68%) is from South America and most is for animal feed.

Tesco promised to end its part in deforestation for commodities like soya by 2020, but in 2018 it quietly changed that goal to 2025 and still has not published a credible plan to show how the target will be achieved.

Instead of tracing soya back to the farm, it buys credits to offset. If Tesco is really serious about ending its part in the triple climate, nature and health emergencies we are facing, reducing meat and dairy sales in favour of more plant-based options is the only way forward.

‘The Amazon is perilously close to tipping point. Scientists warn that in fewer than 20 years it could collapse with catastrophic consequences for Indigenous groups, forest wildlife, our health and the climate.

‘Tesco’s CEO knows we need to eat less meat and dairy to protect forests and stop climate breakdown. And yet the supermarket sells more of it than any other UK company and continues to buy from suppliers owned by Amazon destroyers.’

This year Covid-19 has brought the rest of the world to a standstill, but forest destruction has continued apace in Brazil and the country’s environment minister was even caught on video saying that the pandemic ‘offers a distraction during which the government can ‘run the cattle herd’ through the Amazon, ‘changing all the rules and simplifying standards’.’

Right now, fires are raging in the Amazon and other forests in South America, set deliberately to clear them for agriculture.

Last month, the Amazon saw the largest number of fires for the month of June since 2007, while deforestation in the region is also increasing compared with last year.

The fires are releasing millions of tonnes of CO2 into the atmosphere, accelerating climate change. They also kill wildlife, cause breathing difficulties and long-term health issues for millions of Brazilians and threaten the very existence of Indigenous Peoples.

On top of all that, the more forest that’s lost, the greater the risk of future pandemics.

This is because wildlife is forced from deep in the forest into greater contact with people, raising the chance of deadly viruses passing from animals to humans.

‘Tesco has completely failed to meet its 2020 zero-deforestation pledge and has kicked the can a further five years down the road. Claims that any of the soy in its meat supply chain is ‘deforestation free’ are also hugely misleading, since Tesco merely buys credits to offset soya use without tracing which farms it actually comes from.

‘Unless Tesco commits to significantly reducing meat and dairy sales and drops forest destroyers immediately, vitally important forests will continue to be slashed and burned, and climate change and the risk of future pandemics will only get worse.

‘Our future depends on us eating less meat and dairy and more plant-based food. This way, we could feed more people with all the calories and nutrition needed for a healthy diet without destroying forests.’

Other UK supermarkets and fast food companies are also guilty of churning out the industrial meat that’s fuelling deforestation including Sainsburys, Asda, Burger King, KFC and McDonald’s. But as the biggest by far, Tesco must lead the way.