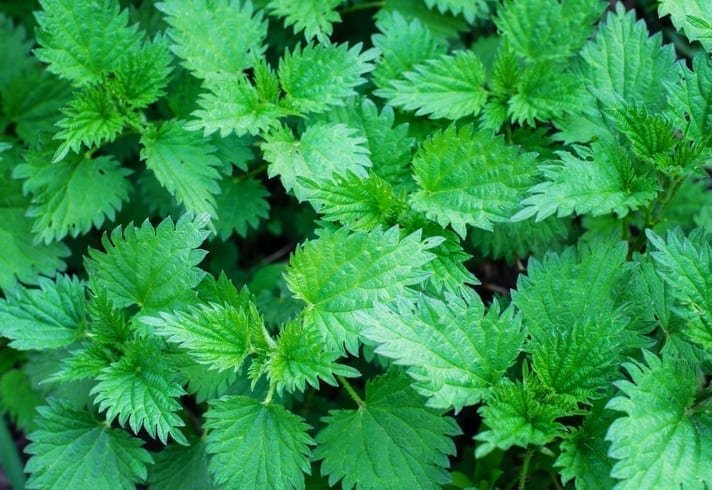 For a very brief summary of why eating this soup as regularly as possible could well be a simple solution to help prevent many diseases, have a look at my article on Nettle Neglect here.

Half-fill a colander with nettle tops. Pinch out the top few leaves from nettles before they have put out to seed or flower, so about 10” to 18” tall would be ideal.

You might need gloves to do this until you have the confidence to pick them with bare hands (I genuinely don’t get stung picking them).

Don’t get nettles from areas that have been sprayed with detrimental agricultural chemicals – an abundance of weeds is a good indication that the area is pesticide free.

Cut up and steam a medium potato, a medium carrot and a medium sweet potato until soft.

Fry an onion and 4-5 cloves of garlic, turn off and add the steamed root veg, a teaspoon of cumin seeds and half a teaspoon of salt and pepper.

Add washed nettle tops (you can also add other foraged greens such as a few dandelion leaves and a handful of wild garlic leaves or hedge garlic), 750ml of boiled water (you can add some stock to this water if you like, I don’t) and a squeeze or lemon and/or a little apple cider vinegar. Blanching deactivates the sting of the nettles.

Blitz with a hand blender or and serve, perhaps with a nice toasted sourdough bread drizzled with extra virgin olive oil or croutons. Enjoy.

A variation on this soup is to make a much greener one, using less or no potato or carrot. Add a little yoghurt or sour cream when served up to give it a nice colour and flavour.

Nettles of course appear in my new book (nearly finished) – Seven Plants to Save the World – as number one, as they reign supreme as the human plant we evolved on.

So do yourself a favour: eat the soup above (with whatever twist makes it more individually appealing), because without making too much of a fuss about it, you will be doing yourself the biggest favour possible. And I promise you will not only be pleasantly surprised at how delicious it is, your body will thank you, as it knows what’s best for you.