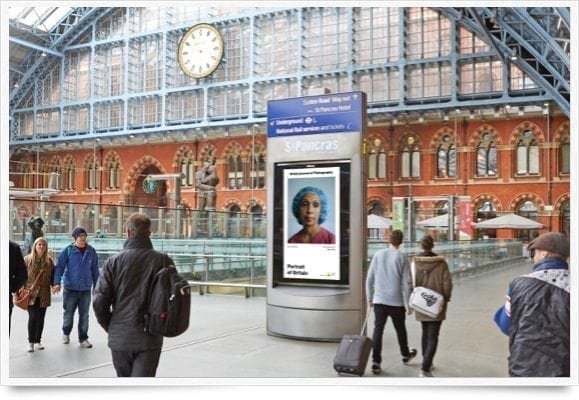 One year after its debut, the UK’s biggest photography exhibition returns, putting the country’s citizens centre stage once more on digital screens up and down the land. Portrait of Britain gives photographers, amateur and professional alike, the chance to showcase their work across the country.

Visualised as an exhibition for the people, by the people, Portrait of Britain reached more than a third of the UK population last autumn. It returns this September with another 100 photographs showing in busy public spaces nationwide. The public will encounter the photographs as they go about their daily lives, displayed across JCDecaux’s digital channel of screens in places such as rail stations, shopping centres, high streets and at Heathrow.

Following an open call by British Journal of Photography, nearly 8,000 portraits were submitted, from which the final 100 have been chosen.

The 100 portraits capture subjects taken across the length and breadth of the country, from Jon Tonks’ picture of an Inner Hebrides islander and her hawk to Sarah Lee’s picture of a septuagenarian surfer, photographed as she leaves the waters of a Cornish beach.

Among the portraits are personalities such as celebrated playwright Tom Stoppard, the artists Antony Gormley and Tracey Emin and grime artist Skepta. There are also unsung heroes such as Rebecca Bunce, co-founder of a domestic violence charity, and Dr Henry Marsh, the pioneering neurosurgeon.

‘Collectively, the portraits celebrate the unique heritage and diversity of modern Britain, as much as its thriving photography culture and the myriad styles and approaches they employ in their work. Yet, as much as our tribal allegiances are on show in many of the photographs, each image reminds us that above all, we are a nation of individuals.’

For the most part, the portraits capture ordinary citizens – sometimes photographed because they were caught up in bigger stories beyond their control, such as Corinne Jones, a survivor of The Grenfell tragedy. She was photographed by Jenny Lewis one week on, captured against the back wall of the hotel she and her family were being temporarily housed in.

‘I don’t think I’ve ever felt more responsibility to show the strength of a person and to create an appropriate image to reflect their story’, Jenny said. ‘You can’t imagine life being more chaotic and out of control with no idea of what the future was going to hold. Amongst this was Corrine a calm, polite, pillar of strength, holding it all together for her family.’

The exhibition, which will run from 01 to 30 September 2017, can be seen in various locations that include major rail hubs such as Euston, King’s Cross, Liverpool Street, London Bridge, St Pancras, Victoria and Waterloo in London as well as Brighton, Birmingham, Edinburgh, Glasgow, Leeds, Liverpool Lime Street. Manchester Piccadilly, Newcastle, Nottingham and Sheffield.

‘This is the second year of Portrait of Britain, a unique exhibition that turns our national channel of portrait screens into a national gallery of portraits. These powerful photographs show a wonderfully diverse view of Britain, capturing people at work, at rest, in family groups and alone, in times of happiness and introspection – and will be seen by the public as they commute, shop and socialise in cities UK-wide. We are proud that Nikon has chosen to support Portrait of Britain and look forward to bringing this exciting project to our national digital channel in September.’

Click here to view the winning images from the exhibition.