Protecting turtles in the Gulf

Jumeirah Group - owner of the world’s most luxurious hotel - is doing its bit for marine conservation. 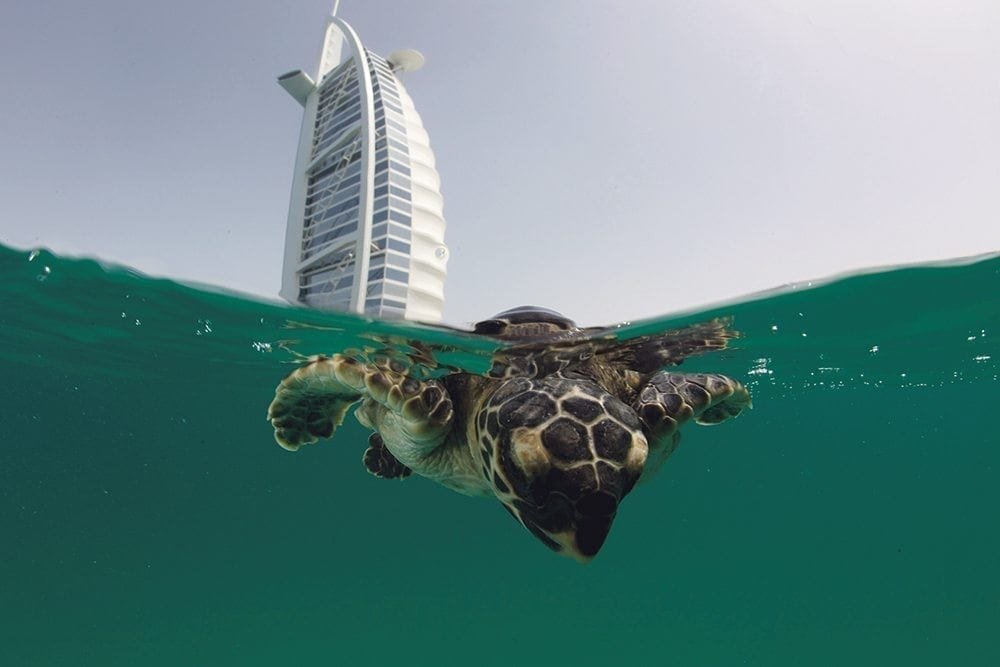 On the shores of the Arabian Gulf, Jumeirah Beach Hotel’s curved silhouette – designed to represent a breaking wave – carries the dizzying reflection of its sister property, the Burj Al Arab, which is consistently voted the world’s most luxurious hotel (a room for two on 2015’s Valentine’s night will set you back around £1.5k). The Jumeirah Beach Hotel looks humble in comparison (what wouldn’t?), but that’s not a coincidence. The shell-like structure was designed in homage to the oysters that produced the pearls on which Dubai’s economy was built in the first half of the 20th century. In a similar vein, the shape of the Conference Centre was inspired by a dhow, a traditional fishing boat from the region which was also used to transport pearl divers.

Today, the Jumeirah Group is continuing the marine theme with a number of conservation projects. As well as implementing a shark protection scheme and installing an artificial reef designed to develop into an ecosystem to encourage marine and reef growth, it also runs a programme to protect turtles and educate guests and citizens about the dangers they face.

The Dubai Turtle Rehabilitation Project (DTRP) launched in 2004, through a collaboration between staff at Wildlife Protection Office and Burj Al Arab Aquarium. Since its inception, the project has seen the release of over 450 rehabilitated turtles – two of which have been fitted with satellite transmitters that allow their journey through the world’s oceans to be tracked.

As well as rescuing, rehabilitating and releasing injured or unwell turtles back into the wild, the project aims to educate local children, citizens and international hotel guests about the global plight of the sea turtle. It also assesses turtle health, provides treatment and collects data from the tracking programme to gain a better understanding of turtle migration patterns.

UAE law prohibits the capture of all species of sea turtle and the collection of their eggs; the penalty for doing so includes imprisonment and/or a heavy fine. However, as the UAE (and Dubai in particular) continues to grow, so too does the traffic along its once peaceful coastline. Fishing nets, jet-skis, boats, uninformed divers and snorkellers all threaten the survival of turtles. Some of the biggest threats to turtles are cold stunning, boat and jet-ski impacts, entanglement in fishing lines and nets and direct injuries caused by fishermen. It is for this reason that the Turtle Rehabilitation Project aims to educate the local community and international guests, as well as nursing injured turtles back to health.

Sick or injured turtles are brought to the Aquarium team at Burj Al Arab by members of the public, where they are treated by Dr Mirjam Hampel. Once the cause of sickness is identified and vetinary care has been given, the turtles are closely monitored and given regular examinations to ensure a healthy recovery. When the team is satisfied with the progress and condition of the turtles, they are then transferred to the Mina A’Salam turtle enclosure. Animals that are already too weak to recover and succumb to their illnesses are sent to the Central Veterinary Research Laboratory, where a full post-mortem examination is carried out to determine the cause of death.

The large enclosure at the Mina A’Salam allows the team to monitor the final stages of rehabilitation before the turtles are released back into UAE territorial waters.

The types of debilitation are varied; some suffer injuries caused by entanglement or the ingestion of plastic waste in the water, while others suffer from sicknesses such as abnormally heavy barnacle growth on the carapace, or ‘shell’. Turtles are reptiles and as such are cold-blooded, gaining their body heat from the surrounding environment. Young turtles are particularly vulnerable to the cold sea temperatures experienced within this region during the months of December, January and February, which is when the majority of sick turtles are found.

Turtles are a symbol of the necessity of conservation in the marine environment and they are protected throughout most of the world. All seven species of marine turtle found globally are listed as vulnerable to extinction, endangered or critically endangered. The hawksbill turtle, native to the Middle East, is listed as critically endangered, with only an estimated 8,000 nesting females left worldwide. Without human intervention, the hawksbill turtle will almost certainly become extinct within our lifetime. On a global scale, the greatest threats to marine turtles are all caused by man.

The Jumeirah Group developed this project for several reasons. Firstly, these activities encourage the engagement of the local community, which is essential to the group’s CSR programme. They will also help to raise awareness and educate the local residents, hotel guests and children in the UAE about the importance of conservation.

For more information on the Jumeirah Group’s turtle rehabilitation project, visit their website.