Ready for a break? 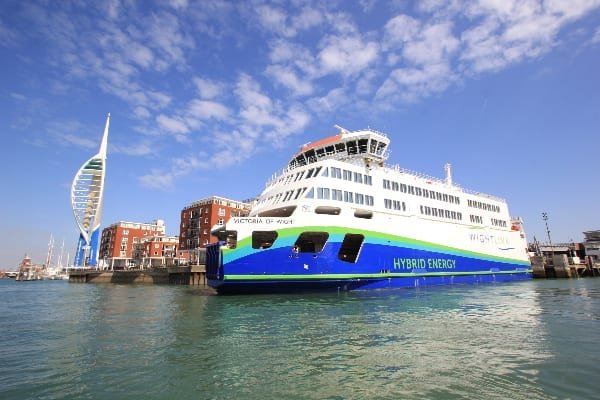 As tourism begins to rebound across the UK, there is a growing awareness of sustainable travel and environmentally conscious holidays.

In celebration of World Nature Conservation Day (28 July), Wightlink is inviting visitors to leave their passport (and air miles) at home and travel on the hybrid energy ferry, P.E.A. Award-winning Victoria of Wight, for an idyllic, environmentally friendly escape on the Isle of Wight, now a UNESCO Biosphere Reserve.

‘The Solent’s waters and its surrounding area are amongst the most beautiful in the country and we recognise our obligation as a transport operator to be as environmentally responsible as possible, in an effort to maintain the important ecosystem around us.

‘The sustainability initiatives and investments we have put in place reflect Wightlink’s commitment to preserving the environment, and as the Isle of Wight is one of the most eco-conscious destinations in Britain, travelling with Wightlink is the ideal match for those looking to holiday more sustainably.’

In 2019, the Isle of Wight (including the waters around the Island) was made a UNESCO Biosphere Reserve – only the sixth region in the UK to be awarded the UNESCO accolade.

This means the Isle of Wight can demonstrate that people and the natural environment are coexisting harmoniously to the highest level, like fellow UNESCO Biosphere Reserves Uluru and Mount Kenya.

To mark World Nature Conservation Day on 28 July, Wightlink will team up with the Blue Marine Foundation to launch the installation of oyster cages at the Lymington port, part of its Solent Oyster Restoration Project, aiming to increase the population of oysters in the Solent to five million.

Oysters are an important part of the local ecosystem, removing pollutants, a single oyster can filter almost 200 litres of seawater daily, eating the phytoplankton and organic matter suspended within it. Wightlink has also installed six ‘vertipools’ (artificial rockpools) in Wightlink’s harbour in Fishbourne, which has attracted over 30 species of marine life.

Wightlink invested £30 million in England’s first hybrid energy ferry, Victoria of Wight, which combines battery power with a conventional engine to use 17% less fuel than the next largest ship on the route.

Wightlink is setting new environmental standards for cross-Solent travel, implementing a Green Agenda, which includes initiatives such as reducing ship and vehicle emissions by 5% and aiming to recycle 50% of waste, both by the end of 2020.

Foot passengers travelling with Wightlink can bring their bikes onboard all routes at no extra cost, to enjoy the Isle of Wight’s 200 miles of cycle routes. The Isle of Wight offers a Slow Travel guide, a collection of eight routes around the Island that can be explored by bus, bike or on foot.

Butterfly spotting doesn’t get any better than at Sudmoor – by far the largest population in the UK of the mysterious and very rare butterfly, the Glanville Fritillary, is found on the cliffs on the Isle of Wight’s south coast. The National Trust also offers a butterfly walk along the chalk ridge at Compton Bay and Downs, with great views and wonderful wildlife.

Head to Newton Creek for birdwatching and swathes of ancient woodland – the Island’s only National Nature Reserve is home to both summer and winter bird visitors, waders and wildfowl. There is also a hay meadow which is filled with summer orchids and wildflowers.

See rare red squirrels and water voles as both of these species, some of our rarest mammals, have taken sanctuary on the Isle of Wight as the main perpetrators of their demise on the mainland – the grey squirrel and the mink – never made it across to the island.

Discover the Isle of Wight’s unique fossil forest and dinosaur footprints at Brook Beach. Featuring a fossilised forest of huge trees which appears from beneath the waves at Hanover Point at low tide, equally spectacular are the fossilised footprints of dinosaurs imprinted in a sandstone ledge and that can also be found amongst the pebbles on the beach.

When looking for accommodation on the Isle of Wight, Tiny Homes are set in a wildflower meadow adjacent to the magnificent Parkhurst Forest with walking trails, cycle routes and wildlife galore.

Founded on a desire to create a slower and more mindful holiday experience, the development uses eco-friendly measures such as solar power, composting toilets, wood-burning stoves and water recycling. Each Tiny Home sleeps up to four, either in two king-sized beds or four singles.