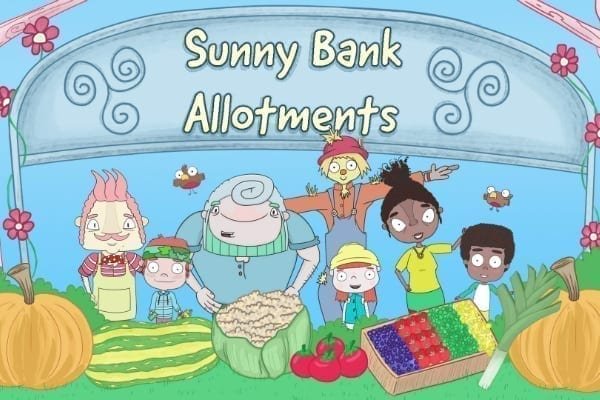 A first-time dad-to-be was so dismayed hearing friends complain about the children’s programmes they were forced to endure in the name of parenthood he wrote and made his own TV series.

Dom Williams, and his wife Jenny of Croydon, were expecting their first child when he came up with the idea for Sunny Bank Allotments. It’s an animated pre-school series which he wrote both as a gift to his unborn child and as an attempt to get away from the type of programmes his friends with children said they were fed up of watching.

‘When you are expecting a first child you know people are going to warn you about the sleepless nights and the lack of time and how much life changes. But I noticed for a lot of parents one of the things that really drove them bonkers was their children’s television programmes – often with storylines that didn’t seem to promote strong family values or reflect the interests of the children I knew. Most children I know love nature, animals, the outdoors and are excited by the idea of grow your own. I was disappointed not to see any shows reflecting all these themes.’

Despite the variety of pre-school programmes on offer, Dom felt many followed the same formats, and couldn’t see how – or if – they were benefitting children’s development.

Fun for kids and parents

Dom started writing the storyline based around a little boy and girl who carried the names (Pippa and Barney) he and his wife had chosen for their baby before they knew what sex it would be.

He worked with an illustrator to design the characters and settings, before going on to animate them and bring them to life with the help of actors who he auditioned and cast through his other business Williams Bulldog Management, a talent agency. The TV show was then made through his established production company Smart Dog Productions Ltd.

Dom, whose business is based in Beckenham, Kent said, ‘I hadn’t written anything like this before, but I was a very passionate parent-to-be and I wanted to produce something my child could enjoy in their early years and grow up to be proud of in later life.’

‘I also wanted something which was not too over the top and with voice and music which kids would enjoy, but which would not prove too grating on their parents. I like to think we have achieved all that’, Dom added.

The programme takes its name from the road in Croydon where Dom and his family live, although he has subsequently found out there are actually at least three places called Sunny Bank Allotments in the UK.

The series consists of 12 11-minute episodes and 12 accompanying books. Details are available at www.Sunnybank.TV, where the episodes can also be watched. They are also available to watch via the popular Kids Youtube Channel Wizz.

Sunny Bank Allotments is a magical place where Pippa and Barney learn all about planting and growing their own fruit and vegetables with their Scottish Grandfather, who they call Grampy, and his special friends.

Grampy is a kind, elderly but fit man who is passionate about his allotment and keen to pass on this knowledge to his grandchildren. Grampy loves talking about seeds and growing and is always amused by Pippa and Barney’s interpretation of his world as they explore, learn and turn into what he calls ‘little allotmenteers’.

Barney, four, is a cheeky young boy who loves hanging out with his Grampy down the allotment, but is often in a dream world of his own.

Pippa, six, loves to learn and understand everything she sees and isn’t shy to ask questions. She loves it when Grampy explains how things work and when she sees these things in action. Pippa sometimes gets frustrated with Barney when he’s not paying attention – because she finds the real world so amazing she doesn’t need to disappear into a dreamworld like he does.

Other regular characters include Scary Joe – a scare-less-scarecrow with a wonderful Welsh accent who secretly loves and encourages the birds and Mr Robin – a happy wild bird who is Scary Joe’s best friend.

In a simple and entertaining way, each episode aims to provide education on a range of topics linked to life at the Allotment. These include agriculture, healthy eating, fruit and vegetables and wildlife, including birds, insects and animals.

The balance of Pippa’s love of learning and Barney’s vivid imagination allows the viewer to explore the magical natural world of the allotment, as well as more far-flung destinations and dreams via Barney’s exciting daydreams. This means that learning and adventure are combined to engage and encourage the viewer to visualise situations and their surroundings in new ways.

The story shows the interactions between the family and friends and how they support each other through their love of nature and the outdoors. The interactions are with an ethnically diverse range of people on other allotment plots, as well as with the birds, insects and animals found around the plot (although some of this is in Barney’s imagination).

Click here to find out why kids want green education.