Lightning crackled across the sky and a pane of glass shattered in its frame a couple of rooms away. The bathroom door was charging between walls with the determination of a blind and angry rhino, and the front door had been broken and pinned open by a howling wind. I watched the rain splatter in horizontal lines across the window as thunder clapped round our bedroom. 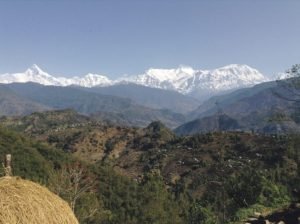 These were the early hours of our first morning in Pokhara, the launchpad for trekkers entering the Himalaya in Nepal. The next day we would embark on a four-day trek into the Annapurnas, home of the 8,091m Annapurna I and a mountain range I’d always dreamt of hiking through.

Lying in the eye of a storm, I thought about a talk I’d attended in London years earlier, where Robert Macfarlane questioned what attracts us to the mountains. They’re cold. They’re wet. They’re dangerous. But they’re so inexplicably appealing. Our bodies aren’t designed to go there – we get altitude sickness and vertigo at best, frostbite and organ failure at worst – but still, we’re drawn like flakey filings to a magnetic pole.

My man and I had no intention of scaling a summit – our only wish was to ‘be’ in the mountains and spend a few days trekking between villages and breathing in the magical mountain air. We needed to be in Kathmandu for a few days, so it seemed like a perfect opportunity for a system reboot and a good, long stretch of the legs. Intrepid Travel tailored a route to fit round our plans and take us off the beaten track on a bespoke trek. Perfect.

We woke up early and set off with our guide, Siva, for Day One; our first clear view of the Annapurnas was from the roadside on our way out of Pokhara. The mountains didn’t look real or reveal any sense of their true scale, standing like a 2D stage set against fumey, congested streets strewn with Coca-Cola bottles and jammed with tourist shops selling everything from woolly hats to ice creams. 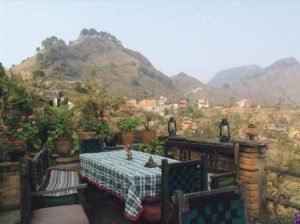 While we strained to locate the blurry, distant peak of Annapurna I, Mount Machapuchare – or ‘Fish Tail Mountain’ – leapt from the landscape like a cut-out from a pop-up book. This mountain dominates the skyline for several reasons: for starters, it’s just 25km north of Pokhara and glows like fiery magnesium from the south of the Annapurna range. It juts up into a dramatic peak – a stereotypical inverted ‘V’ – in stark relief to the relatively flat terrain north of Pokhara, and is crested with a stunning double summit, the ‘fish tail’ after which it’s named.

In addition to its topological prowess, this mountain has a mystical and deeply psychological attraction: it’s one of the world’s last unbagged peaks, and the human obsession with uncharted territory has been enough to make countless adventurers pack their boots and set off into the unknown. The local population considers Mount Machapuchare to be sacred to Lord Shiva, the Hindu god that defies limit or form. As a result, the mountain is off limits and no one has ever reached the top.

Tourism is vital to the economy in Nepal, but those living in Himalayan mountain communities probably consider western tourists to be lunatics. Over the course of our trek we met villagers hiking up and down the rollercoaster terrain for simple necessities like education, building materials and water – why would anyone choose to go further and summit a mountain for pleasure? Instead, traditional Hindu and Buddhist mountain pilgrimages focus on the spirituality of the landscape; mountains are circumambulated, praised and appreciated from all angles and perspectives. Only westerners want to charge to the peak and stick a flag in it.

With that logic (and great excuse) in mind, we worked with Intrepid Travel on an itinerary that would lead us through the Himalaya without focusing on a base camp or purely upward climb; we would wind our way through small communities and stay in local homes, walking for around seven and a half hours each day.

It was March and it was very hot – not least because our rucksacks were jammed with everything we might need: waterproof jackets and trousers, a sleeping bag and something warm for when the temperature dropped to freezing point at night. We were dropped off at Kalisthan, about an hour’s drive from Pokhara, and spent the day walking on pretty straightforward forest paths and roads to Yanjakot, keeping the mountains in almost constant view.

Just before the sun went down, we had chance to pause and take in our surroundings. Yanjakot is high on the hillside, and once more Machapuchare beamed in the golden light. We spent the night with a small family who shared their stories in broken English from the fireside in their home. Dinner was dal bhat (lentils with rice and pickle), which was soothing and nourishing after the day’s walk.

As the night descended, another magnificent lightning show lit up the sky. We watched in awe as electric forks trailed and danced over the valley, and Siva explained that the gods were taking photos as we drank a warm and dangerously drinkable concoction of home-brewed millet. We slept well that night, clamped together in a single bed beneath two wool blankets as the thunder rumbled gently around us.

We got up early to watch the sky turn pink as the sun climbed up into the Himalayan sky. It was almost impossible to comprehend that the billions of billions of tonnes of rocky, snow-covered mountains had once lived deep beneath the sea, and were thrust up into the air when the Indian plate was stopped in its tracks by the unbudgeable Tibetan plate. I tried to imagine how the landscape would have looked back then – smooth and rounded before the battering of earthquakes, glaciers and storms created the jagged peaks we see today. My partner took a deep breath and his eyes sparkled. ‘I’d love to go right up there, to the very peak’, he said, seduced by the beauty of the skyline. A couple of days later he would change his mind.

We descended into the valley and were grateful of the downhill walk; the sun was beating down and all our nighttime kit was back on our shoulders. We were moving towards Siklis, the last village before the mountains and the recruitment capital for our Ghurka soldiers, who have been an integral part of the British Army for over 200 years. 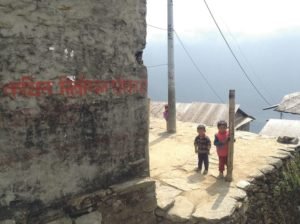 The route to Siklis is undeveloped and doesn’t attract many tourists. We followed the Madi river through the rocky valley before climbing up winding stone steps and paths for just over two hours, until we reached the village. The reward at the top, 2,000m above sea level, was incredible. Vultures circled the sky – a rare treat after living in Mumbai where the population has been decimated – and the narrow streets were lined with beautiful houses crafted from stone and mud. The view back down across the valley, with the winding Madi sparkling in the bright sunshine, was utterly breathtaking.

We pitched up at Namaste Guest House and moved our chairs to the camp fire as the sun went down. It wasn’t long before music started playing from an old stereo, and men and women got up to dance in the traditional local style.

It was unlike any dance I’d seen before; the women held their long wool skirts to the side and swayed elegantly, pointing their toes into a rocking two-step shuffle. It wasn’t easy to be elegant with a pair of aching thighs bubble-wrapped in three pairs of trousers, but we couldn’t resist joining in. We laughed (as did they) as we tried out some moves, and slept deeply that night as another storm whipped up the mountain air.

After exploring the narrow winding paths of the beautifully preserved village, and watching women turn nettles into sacks and hand-loom wool into beautiful rugs, we set off for Tara Hill – higher still in the mountains and famed for its views.

After climbing some distance, a fierce storm set in – reminding us how quickly and dramatically the environment can change. Still in my shorts, the hail felt like spud gun attacks, with giant stones bouncing off trees, shoulders, stones and knees as we wound our way through an enchanting jungle path bursting with twisted rhododendron trees. After just over two hours we arrived at a signpost: Tara Hill, three hours. Siklis: two and a half hours. Nothing was given in miles or kilometers, but I could see why no one would want to tackle these paths with a trundlewheel.

We battled through to the top, soaking wet, freezing and without much feeling left in our fingers or toes. This was a viewing point and the only shelter was an old disused barn. We dived in and quickly made a fire from the hay that lined the floor. It was very, very cold, and the storm showed no sign of relenting. The sky was thick with cloud so we couldn’t see anything around us – 3,056m up with no clue of what was below. This was nothing; Annapurna Base Camp is around 1,000m higher than Tara Hill Top, and my man was quick to admit he’d gone off the idea of scaling a peak.

We put our boots next to the fire to dry and opened our packed lunch with numb and shaking fingers – two boiled eggs, some salt and delicious Nepali bread. At the time it felt like the best meal I’d ever eaten. Galvanised, dry(ish) and energised, we stamped out the fire and started our descent.

It was a steep and tough track that cut straight through the centre of the dense forest. The rhododendron buds were just about to flower; a week later and the trail would have been ablaze with fiery reds and pinks. At the bottom, we stayed with another beautiful family at Samjana Homestay and Cottage in Ghalekharka. 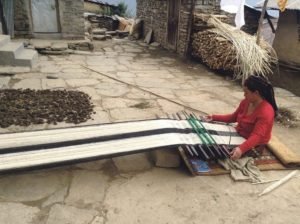 After returning to Pokhara, we made the final leg of our journey and arrived in Bandipur, which has been described as a living museum of Newari culture. 700m above the Marsyangdi River valley, at the end of a 8km corkscrew drive, the village was a far cry from the madness of Pokhara. The settlement is perched like an eagle’s nest on a 200m mountain saddle in the Mahabarat range, with a quiet, central street lined with traditional buildings that rear back onto the steep hilltop slope. It was a prosperous town thanks to its unique trading position between lowland and highland, and between British India and Tibet.

Reflecting the town’s historical grandeur, The Old Inn was the most beautiful place we could have imagined spending our last night. Oozing rustic charm from every twist of the wooden staircase and every creak of the floor, this restored Newari townhouse was an absolute gem. If we could have stayed an extra week it would have been to enjoy the local treks and admire the Annapurnas from the excellent viewing point of Bandipur, without feeling any compulsion to push higher into the mountains.

Jet Airways has regular flights from London to Kathmandu, via Delhi or Mumbai.

The best time to visit the Annapurna range is October or November, just after the monsoon. Visibility will be good and the countryside will be lush and green. Expect to pay around £850 per adult for a return economy ticket from London with Jet Airways over this period.