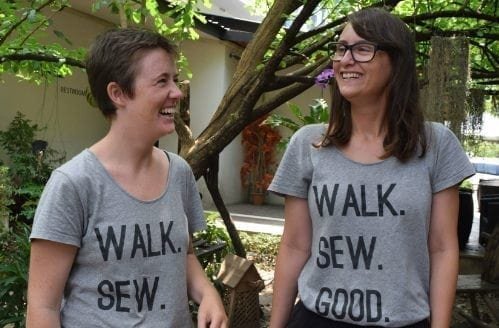 ‘I hate shopping. I’ve always hated shopping.’ Not the words I expected to hear from a woman walking 3,500 miles across Southeast Asia to raise awareness of ethical fashion. But within minutes of meeting Gab Murphy and her companion Megan O’Malley, it’s crystal clear that the epic journey they’re making is not about clothes. It’s about people.

It pays to be positive

Gab and Megan are the founding members of Walk Sew Good. They have taken flight from their homeland of Australia to walk across Vietnam, Cambodia, Thailand and Laos, meeting businesses along the way that take care of people and the environment.

Broadcasting their interviews across YouTube and Instagram, they hope to inspire consumers to make more socially responsible choices when shopping for fashion.

‘We did think about telling negative stories as well as positive ones’, says Megan, ‘but rather than showing people what they shouldn’t be doing and making them feel guilty, we decided to show people who they should be supporting.’

‘Negative stories don’t bridge any gaps between the consumer and the maker. You can read horrific details of abuse in the workplace and factories collapsing, people living on two dollars a day, and it’s something you cannot relate to at all in the west. Whereas if you have a story where you go into someone’s home and they’re like: my mum taught me how to sew, and my favourite movie is La La Land, you create that human aspect. It’s like, okay, I can relate to that. These are not just poor people that we need to help save. They’re intelligent, they have solutions. It’s about supporting them to make those solutions.’

I joined Gab and Megan on a visit to Dignity Returns, a small garment factory on the outskirts of Bangkok which is a case in point. Co-founder Manom explained how he and his fellow workers set it up after fleeing horrendous working conditions in a factory producing clothes for some of the major global brands.

Workers were forced to take amphetamines to stay awake during gruelling three-day shifts. Pregnant women lost their babies as a result. Workers were fined for yawning.

It’s been a struggle to get to where they are now but they’re proud of what they’ve achieved – they work in good conditions and are part of a thriving community.

Hearing Manom say this, and seeing the space they’ve created, where it’s light and cool and the workers look comfortable and healthy, I think yes. Of course this is where I’d rather my money went.

‘This is exactly the kind of story that keeps us going’, says Gab. ‘Workers feeling empowered and taking their fate into their own hands.’ Megan agrees: ‘Every time we do an interview we just get so inspired. It’s amazing to see the different solutions people have to the problems.’

One issue I’ve experienced while researching this piece is the urge to buy from all the companies Megan and Gab have visited. Stunning silver jewellery made from recycled iPhone parts by local Vietnamese artisans at Wrongami. Comfy casuals tailored by Cambodian company Dorsu out of end-of-roll leftover materials. Colourful backpacks fashioned from upcycled material by Beekeeper Parade.

But when I ask Megan and Gab for tips on shopping ethically they stress the importance of consuming less.

‘First of all, ask: do you really need it? And then ask questions’, says Megan. ‘There’s a lot of resources out there you can look at. Project Just has the Just Seal of Approval, they go through quite a process to give brands that. Locally, if there’s a brand that you love in your hometown, ask them: who made it? You’ll be able to tell pretty early on if they know, and whether they care about that side of the business. Choose things that are going to last. Have fun with it, but make sure it’s going to be something you’re going to get some use out of.’

‘I do clothes swaps with my friends’, Gab adds. ‘And I love buying things secondhand. But buy it because it looks good on you and you’re going to wear it, not because it’s cheap and it looks good on the rack. A great tip from Sammy Leigh’s blog Ecomono is if you see something in a magazine you like, take a photo of it. Take it into the secondhand store and find pieces that look like it. There’s an Instagram account called op shop to runway where she does that.’

At the time of writing, Meg and Gab have a seven-week walk to Chiang Mai ahead, their first experience of tackling mountains. So how has it been so far? Have there been bad experiences?

‘In one village they thought I was the mum and Gab was my teenage son’, Megan laughs.

But overall, the trip has been overwhelmingly positive. They’ve had run-ins with dogs and mosquitoes and endured bad stomachs, but local people have welcomed them into their family homes, fed them, given them handmade gifts and even planted trees in their honour.

‘Before the trip everyone was like: oh my god it’s so dangerous. But the only thing we have experienced is generosity and kindness’, said Meg.

So what can people do in support? ‘Well, if you’re Emma Watson come and walk with us a while!’ laughs Gab. ‘We really want her to join us – we have a hashtag – #emmawalkson – you think it works?!’

Click here for more about Meg and Gab mission with Walk Sew Good.