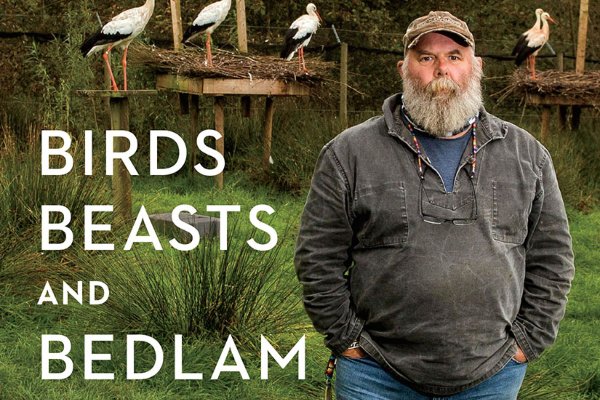 Birds, Beasts & Bedlam recounts the truly wild adventures of farmer-turned-rewilder Derek Gow, who is saving Britain’s much-loved but dangerously threatened species – from the water vole to the beaver, the wildcat to the white stork and the tree frog to the glow worm.

Derek’s first book, Bringing Back the Beaver, was a riotously funny and subversive account of his single-handed reintroduction of the beaver in Britain.

Birds, Beasts & Bedlam, a natural successor to Gerald Durrell’s A Zoo in My Luggage, tells the story of Derek’s rewilding journey and his work to save many more species by transforming his Devon farm into a wildlife breeding centre.

Derek grew up in a farming community in Scotland and kept his first sheep at the age of 10 – but his childhood dream was to become a zookeeper.

After a stint as a livestock auctioneer he jumped at the chance to manage a wildlife park in Scotland, before developing two nature centres in England and eventually returning to farming.

Inspired by progressive keepers and the rare species he worked with, Derek started breeding beavers and water voles.

‘Gow reinvents what it means to be a guardian of the countryside.’

His career as a rewilder took hold in 2018; to his horror he had caught only two mice and not a single vole from the 70 live traps he had set on Coombeshead, his 300-acre farm, to see what kind of wildlife he could find.

Derek removed the farm’s fences and enclosures, bid a tearful farewell to the majority of his livestock and moved his herd of heck cattle to live wild in his woodland with his pigs.

Since then, Derek has been rewilding the land and operating an independent wildlife centre on the Devon/Cornwall border, working to reintroduce and revive local ecosystems and biodiversity.

In Birds, Beasts & Bedlam Derek shares the realities of his experiences; how he reared delicate roe deer and a sofa-loving wild boar piglet, moved a raging bison bull across the country, got bitten by a Scottish wildcat, returned honking skeins of graylag geese to the land and water that was once theirs and restored the white stork to the Knepp Estate with P.E.A. Award-winning Charlie Burrell and Isabella Tree.

Derek now houses beavers, white storks, water voles, lynx, wildcats and harvest mice, with the aim of releasing them into the wild one day.

Tearing down fences literally and metaphorically, Derek is the one person with the character and strength of will to defy authority, bend the rules—and save our wildlife.