Carry Somers, founder and creator of Fashion Revolution, kicked things off with a great speech about her goal to raise awareness of the true cost of fashion — and that set the tone for the rest of the week.

The Sustain Debate was introduced by Izzie Roffe-Silvester, who shared Material Fiction stories to encourage the 200-strong audience to think about fashion from different perspectives. The panellists Carry Somers, head of Fashion Revolution, Purna Sen, Labour PPC for Brighton Pavilion, Tamsin Lejeune, CEO of the Ethical Fashion Forum, Caroline Lucas MP and Pants to Poverty founder Ben Ramsden engaged in a passionate debate about the many issues around ethics and sustainability in the fashion industry.

Liz Bishop, event director and founder of Brighton Fashion Week, said, ‘Brighton is overflowing with moral thinking and fashion industry practices are not exempt from the discussion. We can all do our part in sharing existing resources and limiting new purchases, but the reality is that we are all still ‘consumers.’ We want to have an open discussion to educate ourselves about the hidden costs behind the things we buy.’

‘What we want’, Liz added, ‘is to gain a greater understanding of how our purchases can help us shape more sustainable business practices and a more responsible economy as a whole.’

The debate was followed by the first of Brighton Fashion Week’s catwalk events, Sustain. Back by popular demand, the catwalk show at the Old Ship hotel promoted sustainability by showcasing designers who combine innovative fashion design with ethical thinking.

Kumiko Tani, director of Re-cycle-style (pictured), stole the show, with a collection designed to change the image of recycling by showing just how stunning the results can be. The wider goal is ultimately to help reduce the volume of waste we create.

The show began by unveiling a dress created by Dumpster Design, in collaboration with Sustain’s sponsor, Veolia. Other designers included Victoria George and Wan and Wong Fashion, with Catherine Hudson headlining the catwalk with a SS15 collection — a Brighton Fashion Week exclusive.

Imagine a gender documenter, a crime and thriller novelist and a radical activist and campaigner for issues around pornography, feminism, exploitation, human rights and raunch culture all in the same room. That should give you a flavour of TEDxBrighton 2014. 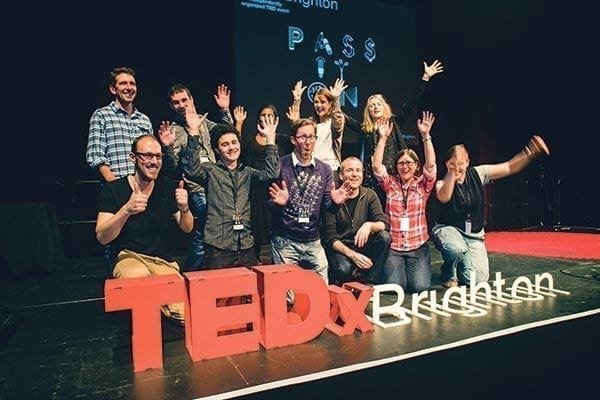 Fox Fisher, Peter James and Sam Roddick were just three of the speakers at this year’s event, which focused on the prevalence of technology in the networked age.

The focus was on how our social networks can leave us feeling more isolated than ever and how, in our world surrounded by screens, we are driven to desire the physical. The talks explored how intimacy looks in the modern age, and explored ideas around flashmobs, subcultures and connectivity across distance. The Ideas Lab ran in the Dome foyer throughout the day and provided a soap box for the very best ground-breaking inventions, designs and new technologies from the South East and beyond.

21st – 23rd November: MADE 2014
The design and craft fair brings hundreds of independent designers to the city for one big weekend.

29 November – 14th December (weekends only): Artists Open Houses
Hundreds of artists open their homes to the general public, giving visitors a chance to speak to the artists directly — and possibly try some mulled wine and homemade treats along the way.

5th December – 17th January: Sleeping Beauty
Set in a converted church, Emporium is a popular cultural arts venue. This festive season it will be hosting a special production of the classic fairytale.

21st December: Burning the Clocks
This unique community event celebrates the lengthening of days with a lantern parade through the city, followed by a bonfire on the beach

6th – 11th January: Holiday on Ice
In a special tribute to the show’s 70th anniversary, Holiday on Ice, starring Ray Quinn, will take you through skating traditions past and present.