Bringing hemp to the high street 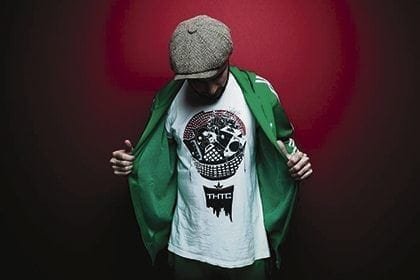 If today is a typical day on planet Earth, the human population will increase by 250,000. 116 square miles of rainforest will be lost (about an acre per second) and we will lose another 72 square miles to encroaching deserts as a result of human mismanagement and overpopulation. We will also add 2,700 tons of chlorofluorocarbons to the atmosphere and 15 million tonnes of carbon, making the Earth hotter, its waters more acidic and the fabric of life more threadbare.

So what are you going to do about it? PQ speaks to Gav Lawson, co-founder and CEO of THTC clothing, on activism, art and why he’s spreading the word (on organic materials).

Gav was introduced to the uses of hemp, in its various forms, by his brother Drew, who studied Environmental Politics and introduced Hempology at Hull. Since then Gav has helped promote hemp as an industrial crop — a clean and sustainable textile, paper, plastic, fuel source, building material and medicine with hundreds of thousands of uses, which can be grown practically anywhere without pesticides.

‘When I learnt the facts, I naturally assumed it was a no-brainer that governments and industry would embrace this wonder plant to help combat environmental destruction,’ Gav tells PQ. ‘Oh how naïve we were!’

‘We, as a people, can change anything we like by choosing to support or ignore whichever brands we like. I feel that it’s better to buy fewer products of higher quality that are built to last, and boycott the hell out of brands that are detrimental to the survival of the planet and the people.

‘I’d also advise watching some of the many life changing documentaries that can be found on YouTube or elsewhere online ‒ and less reality TV. Choose your heroes based on what they have done, not just because they are famous!’

When THTC launched in 1999, ethical and organic clothing wasn’t in high demand. ‘We set about creating our own following, for people who didn’t want to sacrifice style for eco and ethical values’, Gav explains.

The T-shirt designs carry strong political and environmental messages, which are often satirical and hard-hitting. The label works with hundreds of actors, musicians, activists, poets and designers to help get its messages out there. ‘We try to reach people who otherwise probably wouldn’t be especially interested in fair trade or organics, to try and convert them into eco warriors’, he says.

Most of THTC’s clothing consists of hemp mixed with organic cotton or 100% organic cotton, though its current range features 60% recycled cotton and 40% recycled bottles. You can save over 2,000 litres of fresh water by using 55% hemp in a T-shirt, compared with a T-shirt that uses 100% conventionally grown cotton. ‘By buying a THTC T-shirt you have made your first step into eco activism’, Gav says, ’whether you know it or not. We try and create ‘armchair activists,’ empowering people to make little steps towards a greener life.’

Gav also experimented with bamboo but found that, while it’s great for furniture and building materials, it’s ‘not the great eco fabric’ many believe and doesn’t hit the spot as a viscose fabric. ‘What I think we should be doing is using a lot more hemp and a lot more Recycled PET (plastic bottles),’ Gav explains, ‘as well as upcycling our clothes and repairing worn out garments.’

All THTC’s non-hemp garments are sourced from factories in India, Portugal and Turkey, which are fully certified by The Carbon Trust, The Fair Wear Foundation and The Soil Association. While the price of cotton varies wildly according to quality, organic cotton is generally more expensive than the non-organic version which often contains harmful chemicals that destroy farmland and have been linked to cancer. While sourcing organic cotton in Europe is pretty straightforward, finding hemp is a bit more difficult. It’s mainly produced as a textile in China which, unlike other countries, refused to buckle to America’s 1937 Marijuana Tax Act and has a long and illustrious history of hemp production. Romania and Hungary also produce hemp for textile production, but the quality and capacity is nowhere near that of China.

THTC’s hemp is provided by its agent of 14 years in China, whom Gav describes as ‘a very honest man with great integrity.’ Gav’s brother travelled to China to visit the factories and check on working conditions. All the workers are paid well over the national average wage; they are aged 19-65 and work a maximum of nine hours a day, six days a week – with no forced overtime. ‘Generally you’ll find that factories that are manufacturing hemp and other organic fabrics are run by decent people’, Gav says, ‘who are trying to do right by the environment and their employees.’

Being called up by one of the Wu Tan Clan’s managers with a request to model THTC T-shirts was also a definite high point for Gav. Before launching the THTC brand, Gav studied music technology and music business at Bristol. ‘Hip hop is in my blood,’ he tells PQ, ‘and has been for as long as I can remember. I don’t mean the crap that you generally hear on the radio and see on MTV — I mean actual lyricists, genuinely talented people who write and perform beautiful music with a meaning. These are the values from which hip hop culture was originally born.’

THTC is not just a hip hop label but, along with reggae, that’s where Gav’s heart lies. ‘THTC represents my beliefs, and it’s very rare that I work with people whose work I don’t love’, he says. He admits to having occasionally given T-shirts to musicians whose music he’s not into, in a bid to help get THTC’s name out where it will be seen. ‘Otherwise,’ he says, ‘the love I have for great music is equalled only by my contempt of shallow, meaningless, X-Factor-esque nonsense. The reason I get so wound up by it is because there are so many talented artists who never make it because most people don’t make any effort to scratch the surface. On the one hand, THTC would reach a far bigger audience if we watered down our messages and just focused on what is commercially popular, but we also want to create something special, something that means something. THTC has so many USPs that the brand’s mission is sometimes a little foggied.’

The brand has always opted to work with creative individuals and, as a result, attracts other like-minded people. Examples to date include the poet Professor Benjamin Zephaniah, activist/comedian Mark Thomas and actor/hemp activist Woody Harrelson. THTC has produced over 100 T-shirt ranges for bands, artists, clothing labels and charities, from The Black Panthers to environmental groups. It has produced ranges to draw attention to a diverse range of subjects, from tourettes to human trafficking, youth depression to medical cannabis, police brutality, corrupt governments and fallen heroes.

Hard-hitting messages require hard-hitting visuals and, to that end, Gav tracked down street artist Mau Mau (who designed the cover for The Energy Revolution issue of PQ, as well as album cover artwork for hip hop legends Rodney P and Skitz). ‘I consider Mau Mau to be the greatest street artist on the planet (and that includes Banksy!)’, says Gav. ‘He has produced more than half of THTC’s T-shirt designs, and without him there would be no THTC! I also work with a fair few other very talented artists, such as Fybe One, Herse, Reeps One, Oberon, Gibla74, Carrie Reichardt, Owen Tozer, Paul Yuille and Amnesty poet Martin Powell, who are all friends who I have met along the journey.’

Keeping a small independent clothing brand going for 14 years in the current climate is a big achievement, but Gav feels that greater government support for ethical businesses, in the form of heavy taxes or charges for the worst culprits in the industry, would be a big help. Greater celebrity endorsement and a far bigger effort from the media — particularly mainstream TV — to educate people about where products come from and how they are produced would, of course, also be a big step in the right direction.

On top of that there’s a lot more that we could do ourselves; Gav urges everyone to ask producers questions – everywhere from supermarkets to clothes shops – and look for ethical certifications. When you’re buying tea, coffee, sugar or bananas, always choose those that are Fairtrade certified – it doesn’t cost a lot more but makes all the difference to suppliers. ‘Try wherever possible to support small, local businesses instead of chains’, he advises. ‘We, as a people, can change anything we like by choosing to support or ignore whichever brands we like. I feel that it’s better to buy fewer products of higher quality that are built to last, and boycott the hell out of brands that are detrimental to the survival of the planet and the people. I’d also advise watching some of the many life changing documentaries that can be found on YouTube or elsewhere online, such as The Age Of Stupid, Food, Inc., The Union, The Corporation, The End of The Line and The Cove, and less reality TV. Choose your heroes based on what they have done, not just because they are famous!’

You can find out more about Gav and THTC’s clothes and work on Twitter: @gavthtc and Facebook: facebook.com/thtc1 as well as the THTC website. More examples of Mau Mau’s street art can be found at www.mau-mau.co.uk.

One thought on “Bringing hemp to the high street”